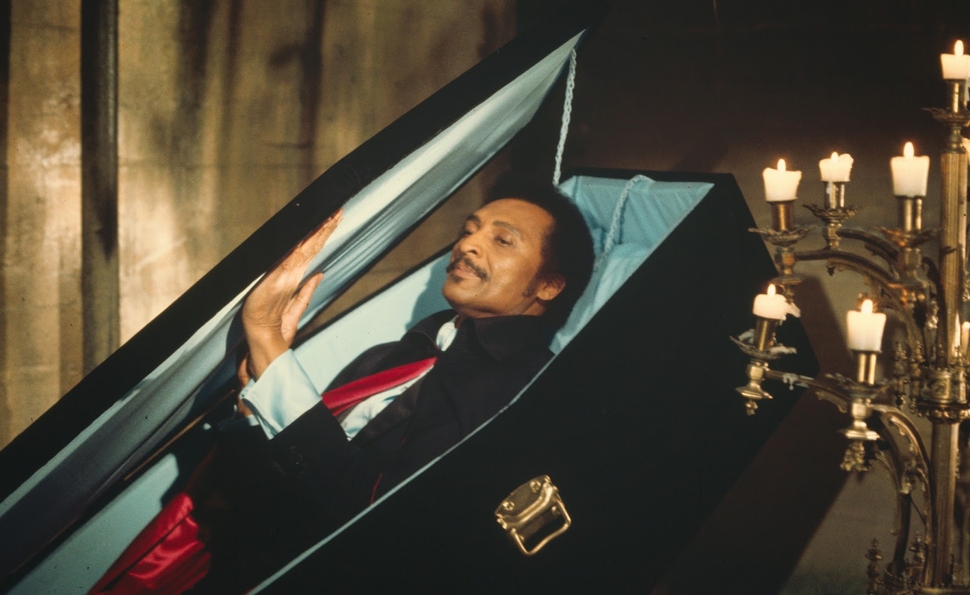 For a series owed mainly to the common “ack” sound between “black” and “Dracula”—though the unfortunate Blackenstein, a Z-grade derivative, doesn’t bother with a pun—Blacula and Scream Blacula Scream hold a legitimately fascinating place in the history of horror and blaxploitation. And it all starts with William Marshall, whose towering Prince Of Darkness is one of the great, classical screen vampires, more in line with Bela Lugosi than the hip, modern, Afro-donning  Los Angelenos that surround him. (Though the cape, a dead giveaway in any other era, is totally within reason for the gentleman to wear at public outings.) There may be cynical commercial reasons for offering a black Dracula—surely producer Samuel Z. Arkoff, B-picture maven extraordinaire, had it worked out to the penny—but Blacula’s ingenious conceit offers Marshall as a direct descendent of the Count himself, and Marshall plays him as an ancient creature of similar class and allure.

But here’s the twist: Blacula opens in 1780, with Marshall’s Prince Mamuwalde stopping at a certain Transylvanian castle as part of a European tour to convince leaders to stop the African slave trade. Count Dracula, who’s white, rebuffs Mamuwalde’s request and turns him into an eternal slave to the night. That’s a powerful idea, especially in an era of black cinema when race-consciousness and black resistance were baked into tawdrier B-movie kicks. When Mamuwalde, christened “Blacula” by his dark master, is revived in the present day, it serves as a constant reminder that the legacy of slavery is still present, which brings the film in line with its more politically minded blaxploitation peers. At the same time, elements of Blacula and its sequel feel like stock material from decades earlier, before acting and aesthetic styles shifted radically in the 1960s and early 1970s. Blacula and Scream Blacula Scream aren’t just about a man out of time—they’re movies out of time, too.

After the Transylvanian prelude turns Mamuwalde into “Blacula” and his beloved wife Luva (Vonetta McGee) into a prisoner, Blacula moves to modern-day Los Angeles, where his coffin has been purchased in an estate scale. When the dopes who did the purchasing decide to crowbar the coffin open, the vampire rises from the grave and claims two for what will become a growing undead army. A fish out of water to say the least, Mamuwalde is cursed to a life of scrounging the earth for human blood, but he’s stunned to discover a young woman, Tina (McGee), who looks exactly like his late wife. There are obstacles to their timeless love, however, specifically Tina’s sister’s boyfriend, a pathologist/badass who suspects that a vampire may be behind the rising local death toll.

Another thing about Blacula’s curious place in blaxploitation history: Neither it nor its sequel are even mildly exploitative. Both are PG-rated films that go light on the blood, and lighter on the sex. (Scream Blacula Scream has Pam Grier, perhaps the era’s most combustible sex symbol, as the second lead, and it’s all but a trip to Sunday school.) That affirms Blacula especially as a vampire film of a much older school, however much it’s disrupted by long funk dance sequences, or fight scenes at a warehouse rife with empty barrels and dust-filled cardboard boxes. This directorial debut from William Crain—the rare African-American from the film-school generation—either lacks the resources or the skills to add much atmosphere to Blacula, which is so cheap that it often seems like producers could only book the most echoey locations available. The placement of an old-fashioned, Bela Lugosi-type Dracula—albeit much, much sweatier—in a modern black neighborhood is a great idea, but the amateurish production leaves Marshall as stranded in the film as his Mamuwalde is stranded in the times.

For the sequel, Bob Kelljan—who directed two Count Yorga vampire movies at the beginning of the 1970s, before moving on to a career in television—replaced Crain and gave Scream Blacula Scream a comparatively polished look, but to no substantial end. The pockets of boredom in the first film, mostly relegated to Dr. Thomas and the police investigation, open up to longer stretches in the second, which advances a needlessly complicated plot involving voodoo, exorcism, and other superfluous hoo-hah. It isn’t worth getting into the story, other than to note Grier’s presence as a newly anointed priestess who squares off against her brother (Richard Lawson), who believes he should head their voodoo cult, and resurrects Mamuwalde’s bones to make it happen.

Scream Blacula Scream does better than Blacula at playing up Marshall’s magisterial power, and the fright sequences, such as they are, are also better staged, with particularly strong use of slow motion when things get bitey. But gone is the tragedy that underpinned the original, when Mamuwalde was turned from free man to eternal slave, and tormented by his wife appearing to him in a different form. Mamuwalde’s interest in protecting Grier’s priestess, the greatest threat to his existence, shows glimmers of the same romantic pull, but Scream Blacula Scream lards it down with another police investigation, voodoo family politics, and other time-wasting elements. There’s so much distance between where Blacula started and where Scream Blacula Scream ends up that the sequel quickly exhausts its thin purpose.

The audio commentary on Blacula, by blaxploitation expert David F. Walker, is absolutely fantastic—funny, entertaining, thoughtful, and deeply informed. In fact, it’s one of the rare occasions when a commentary is more compelling than the movie itself. Walker talks about how Marshall’s background as a Shakespearian actor informed his reading of the character, about varying reactions to the script (Arkoff thought it was one of the best he’d ever read; Marshall thought it was garbage), about the shadow history of African-American cinema pre-blaxploitation, and more. At the same time, he pauses to chuckle at gaffes and botched stunts, and sprinkle in some wry humor. Scream Blacula Scream has a significantly less stimulating interview with Lawson, who fondly (and slowly) remembers the experience. The two films are packaged as a double feature, so perhaps that’s the most special feature of all.