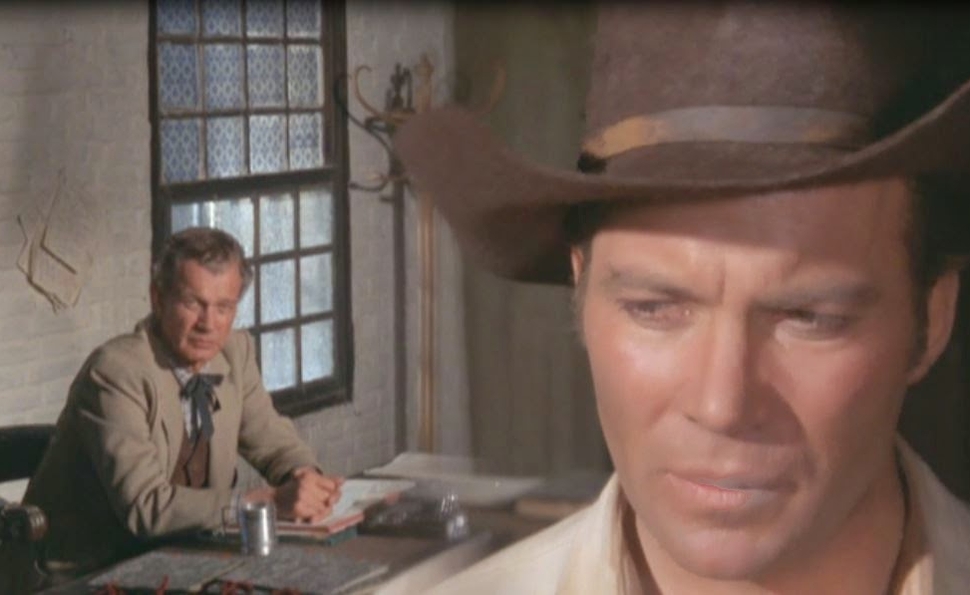 The same decade William Shatner was cast in his signature role as Captain James T. Kirk of the starship Enterprise, he proved he wasn’t afraid of an acting challenge. Whether it was playing a charming anti-integrationist bigot in Roger Corman’s groundbreaking 1962 drama The Intruder, appearing in a Westernized remake of Akira Kurosawa’s Rashomon (1964’s The Outrage), or starring in the world’s first and only Esperanto-language horror film (1966’s Incubus), Shatner gave his all to every role that came his way.

Shot in Spain in the mode of the spaghetti Westerns that were in vogue at the time, the film would likely be forgotten today were it not the one where Shatner plays “half breed” twin brothers, one of whom tries to live peaceably alongside the white man, while the other embraces his Comanche roots and goes on the warpath. A curio in every sense of the word, White Comanche is a would-be cult item, albeit one with a weak pulse, since the Shatner character who gets the most screen time—cowboy Johnny Moon—isn’t endowed with much personality. Apart from being quick on the draw and good with his fists, which saves his skin whenever he’s mistaken for his brother Notah, Johnny is a soft-spoken cipher merely biding his time until their pre-arranged showdown.

Notah, on the other hand, is everything a bare-chested, peyote-taking rabble-rouser whose name means “The Snake” should be. Introduced leading an attack on a stagecoach, which director José Briz Méndez (credited as Gilbert Lee Kay) ends with a suggested rape, the notorious “White Comanche” is tracked down by Johnny after one near-lynching too many. Then Notah disappears for the better part of an hour (and is sorely missed) while Johnny rides into the nearby town of Rio Hondo, where Sheriff Logan (top-billed Joseph Cotten, slumming it) is intent on keeping the peace between the local bigwigs—a sleazy saloon owner (Luis Prendes) and a self-styled general (Vidal Molina) caught up in a contentious land dispute. Instead of playing both sides against the middle, à la A Fistful Of Dollars, Johnny tries to stay out of the fight, but to his chagrin, the fight keeps coming to him.

One of the side benefits of casting Shatner as near-identical twins (as Johnny notes, the only difference between them is the color of their eyes) is that he can be given two love interests without any mucking about with love triangles. Befitting the tenor of the times, though, the female leads are seen in ways both progressive and regressive. As Notah’s pregnant squaw White Fawn, Perla Cristal makes the most of her limited screen time, taking decisive action on behalf of her brave. Saloon girl Kelly (Rossana Yani), meanwhile, is rarely treated as anything other than a sex object or a nuisance. (The one exception: The gentlemanly Logan makes a point of repeatedly calling her “Miss Kelly.”) She’s also remarkably blasé about going skinny-dipping by herself not long after being sexually assaulted by Notah, or casually carrying on a conversation with Johnny, the man she’s wrongfully accused of the assault. (Hey, it was an honest mistake.)

With the exception of one melodramatic scene between Kelly and Johnny where Shatner allows Captain Kirk’s mannerisms to creep into his performance, there’s ultimately little entertainment to be derived from a conflict between two characters who rarely share the same frame. (The forerunner to Michael Mann’s Heat this is not.) And when the long-promised duel finally arrives, the screenwriters have Johnny remove his shirt and don a makeshift headband, rendering him indistinguishable from Notah as they engage in a joust-like Comanche ritual on horseback. This literalizes Johnny’s philosophical musing, “It’s between the two of us. Me and myself, you might say.” What it doesn’t make for is good drama, suspense, or even unintended comedy. Those seeking the latter are advised to look elsewhere.

Audiences get two Shatners for the price of one, but won’t find a single extra on this bare-bones release.