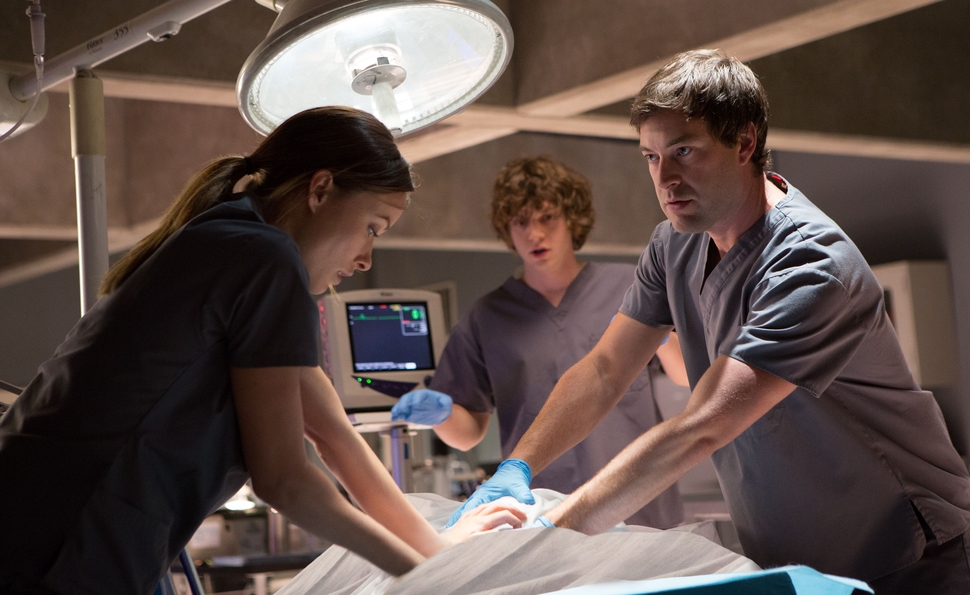 Early in The Lazarus Effect, a scientist named, significantly, Frank (Mark Duplass) attempts to explain how a little mission drift is necessary for breakthroughs to occur. Consider penicillin and Coca-Cola: Both happened by accident. Sure, Frank’s research started out as a way to discover new ways of treating comatose patients, but isn’t the prospect of resurrecting the dead more interesting? The argument doesn’t work, either for Frank or the film. It raises ethical questions it can only feint at considering, just as it underserves the conflict between science and faith that initially seems like it will play a major role in the movie, at least in what space is left between easy, PG-13-friendly jolts.

Despite an intriguing opening and an overqualified cast, The Lazarus Effect can’t shake a been-there/resurrected-that vibe left over from Flatliners, Pet Sematary, and countless other films stretching back to Frankenstein. Olivia Wilde co-stars as Zoe, Frank’s research partner and fiancée. They work shoulder-by-shoulder with Niko (Donald Glover) and Clay (Evan Peters), pushing toward a breakthrough that will let them reanimate dead subjects, but—though this is never explicitly stated—not turn them into soulless killing machines in the process. They’re joined by Eva (Sarah Bolger), a student documentarian who witnesses their first great triumph when they bring a dog named Rocky back to life. In one of many breaches of scientific protocol, Frank and Zoe take Rocky home, leading to some scenes in which he appears to menace a sleeping Zoe. It’s a bait-and-switch, however: Soon Zoe is electrocuted in a lab accident, and then she’s the one coming back from the great beyond and doing the menacing.

The Lazarus Effect is the latest offering from Jason Blum’s Blumhouse Productions, which has specialized in low-budget horror films since Paranormal Activity hit film festivals in 2007. Innovative filmmakers have made a virtue out of the company’s budgetary restrictions, which have led to compelling efforts like James Wan’s Insidious. Director David Gelb, best known for the documentary Jiro Dreams Of Sushi, struggles to do the same, staging most of the action in a basement lab that seems comically underlit. (Whatever their ethical transgressions, Frank and his team believe in energy efficiency.) The cast of familiar faces mostly just lends The Lazarus Effect some unearned respectability. But the film only comes to life in a few fantasy sequences set in a corner of hell made up of Zoe’s childhood memories, which suggests Gelb spent a lot of prep time watching David Lynch movies. The plodding material around those scenes blunts their impact, though, making those sequences just another example of resurrection gone awry.