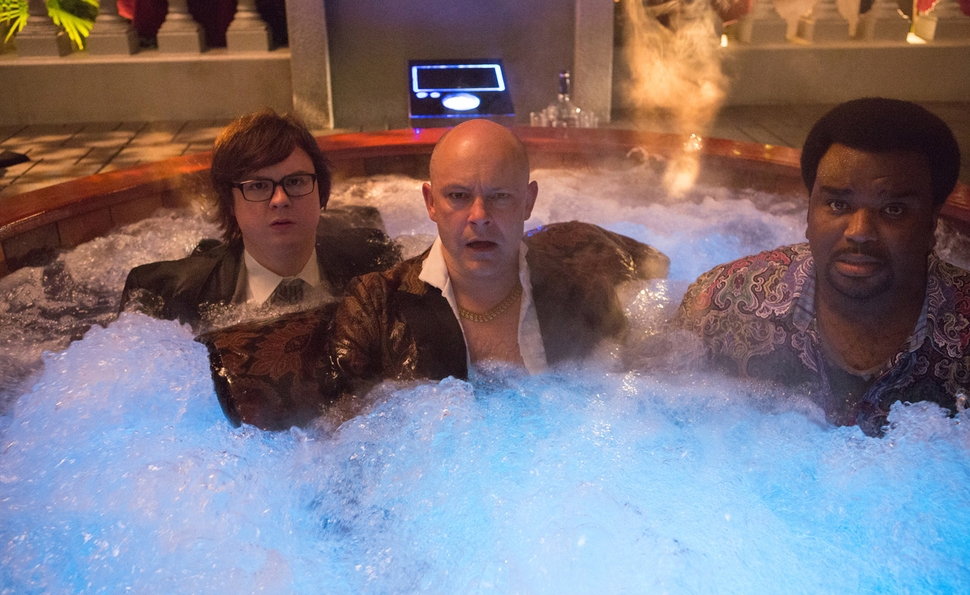 There is a theory that early in the 2010 time-travel comedy Hot Tub Time Machine, the alpha-asshole played by Rob Corddry commits suicide, and the rest of the film is an “An Occurrence At Owl Creek Bridge”-like fantasy of youth, vitality, sex, and escape from a man literally putting an end to a miserable existence. This alternate reading of the film helps explain the pervasive darkness and sadness of a movie that often doesn’t even attempt to translate its pathetic nostalgia for the glory years of teenage debauchery into anything remotely resembling comedy. There’s also an awful lot of darkness in the film’s 2015 sequel, Hot Tub Time Machine 2, as characters who have every reason in the world to hate themselves with a suicidal fervor vent their frustrations in monologues that would stop the comedy cold if it ever got started in the first place.

Much of the pain is penis-related. There are Puppetry Of The Penis productions less genital-obsessed than Hot Tub Time Machine 2. Over the course of the film, a character is shot to death in the penis, another character has a giant needle shoved into his penis, and in a setpiece that seems to take up most of the film, one character is forced to stick his enormous penis inside another character’s anus for the amusement of a national television audience. It’s as if, in the absence of original star John Cusack—who apparently couldn’t make it because he was shooting a direct-to-video thriller in Bulgaria with Thomas Jane or Nicolas Cage or something—the film doubled down on its repellent nastiness.

Imagine a version of Back To The Future Part II where Biff Tannen emerged as the hero in the absence of Marty McFly, and you have a sense of the film’s sour miscalculation. The movie opens in a present where Cusack’s character is seen only in photographs (presumably, like Poochie, he was killed on the trip back to his home planet) and Lou (Corddry) has used the titular water-based time-travel apparatus to become a Steve Jobs-like technology mogul, despite dressing like a cross between a 1980s hair-rocker and a Roman dictator. Ever the alpha asshole, Lou employs his long-suffering nephew Jacob (Clark Duke) as his butler while Nick (Craig Robinson) has used the time machine to release his versions of hit songs before the original artists have even a chance to write them.

Then one day, at one of his many bacchanals, Lou gets fatally shot in the dick, and the remaining time-travelers journey into the past to try to find his killer. The problem is that just about everyone has a motive to kill Lou, since he’s the world’s biggest asshole. Notable suspects include Jacob, a former friend (Jason Jones), and one of Lou’s disgruntled former employees (Kumail Nanjiani).

The filmmakers try to compensate for Cusack’s absence by introducing Adam Scott as Lou’s nephew, a fresh-faced innocent who’s dosed with a drug that affords the filmmakers an opportunity to badly rip off The Hangover’s scenes of accidental decadence. Normally, trading in late-period John Cusack for Adam Scott would represent an upgrade, but Scott is essentially playing his Parks And Recreation character here, and he seems to be on hand less as a character than as a plot point—literally the butt of the film’s central gay-panic joke.

Improvisational comedies sometimes end with outtakes where cast members gifted in the art of the ad-lib rattle off 10 different lines in the same context, with the same rat-a-tat rhythm. Hot Tub Time Machine 2 is essentially a feature-length version of those outtakes, with Corddry and Robinson constantly delivering variations on the same joke (say, regarding who or what Jacob looks like bald) in a painfully unfunny way that exposes the randomness of the comedy and the flimsiness of the characterization. The humor is seldom character-based: It’s more a matter of actors saying whatever outrageous thing springs to mind at that moment.

In one of the many jokes that don’t really make sense, Scott’s docile, sweet-natured character says his favorite television show is Choozy Doozy, a game show where pretty much every week, a man or woman is forced into gay sex. The character describes it as one of a rich variety of humiliation-based television shows beloved by the public. By that standard, the humiliation-based comedy of Hot Tub Time Machine 2—where the humiliation is shared by cast, crew, and audience alike—should be a huge hit in the dystopian world of 2025.