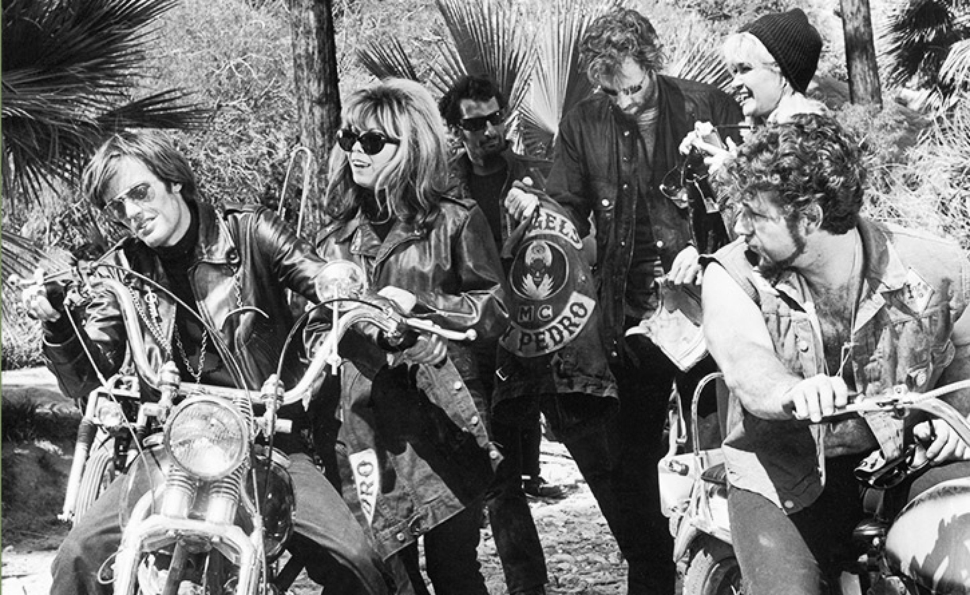 Roger Corman didn’t set out to document changes in the culture with the low-budget films he directed and produced. That was just a happy side effect. Corman had a keen sense of what the kids wanted during a heyday that stretched from the 1950s to the early 1980s—not coincidentally, the heyday of the drive-ins—and he didn’t waste time capitalizing on that skill. Sometimes that meant monster movies. At other times, it meant tapping into to whatever form the counterculture was taking at the time, for exploitation movies that treated their subjects with a mix of wonder and wariness. (For evidence, look no further than The Trip, which leaves hanging the question of whether LSD is a mind-expanding wonder or a mind-destroying plague.)

Released in 1966, The Wild Angels came early in a long cycle of biker movies that probably wouldn’t have happened without its success. As a Corman film, it’s typical in its mix of authentic detail and exaggeration. Headlined by two scions of entertainment giants—Peter Fonda and Nancy Sinatra—the film surrenders any claim to documentary authenticity from its first frame. A scan of the credits further reveals that the mostly incongruous, go-go-friendly rock instrumentals come from future California lieutenant governor Mike Curb. Yet the same credits also feature some curious co-stars, like the Venice chapter of the Hells Angels.

Corman had trouble wrangling the uncooperative bikers, and Peter Bogdanovich, who served as assistant director and provided uncredited rewrites on the script from Corman vet Charles B. Griffith, was menaced and abused on the set. Virtually every scene of the film suggests Corman and company might have gotten themselves in over their heads. The film is filled with the details of Hells Angels life that Hunter S.  Thompson wrote about in Hell’s Angels the following year. Early on, a biker named Loser (Bruce Dern) walks off his oil-rig job after getting in a fight with his World War II veteran foreman (the ubiquitous Dick Miller) over the Nazi regalia he sports. Later, he’s buried in a Nazi flag. This isn’t because the Angels are white supremacists—which isn’t to say the organization has a great record when it comes to race—but because they never passed up an opportunity to piss off the squares. (In a later scene, the camera pans away just as a pair of bikers start kissing each other, another Angels practice that had more to do with shock value than beliefs.) It’s the Hollywood version of biker life, sure, but one that’s swapped in a lot of ugly authenticity.

Released three years before Easy Rider, Wild Angels finds Fonda already looking comfortable atop a bike as he rides through a variety of found California locations that the film does little to dress up to look like a movie. He gives his character Heavenly Blues a brooding, Byronic bent. Even as orgies break out around him, he seems to be giving at least half a thought to what it all means. That might be partly because—like Loser, who’s settled down with Gaysh (played by Dern’s then-wife Diane Ladd)—Blues has found a steady girl. Mike (Sinatra) makes allusions to having been shared by the gang in the past, but Blues doesn’t let this bother him, and they seem to have developed as steady a relationship as anyone could have in the middle of all the robbing and mayhem.

The gang is thrown into a crisis, however, when Loser gets arrested and seriously injured after a raid on some Hispanic bikers they believe to have stolen his bike. As the Angels break into a hospital to bust him out, the already unflattering film starts to get uglier. One member attempts to rape a nurse, and when the gang gets Loser home, they have to argue to secure a bed for him to die on. The gang is only a surrogate family, it seems, until it becomes an inconvenience.

The film’s piece de resistance is its final act, a long biker funeral that finds Blues arguing with a preacher about what the Angels want, in a meaty monologue with a reference to Paradise Lost. Then it erupts into a church-destroying orgy. It’s an unforgettable sequence, filled with revelry, rape, bongo-drumming, corpse abuse, and heedless nihilism, in which some of the characters, and maybe even the film, come to recognize they’ve gone too far. Somehow, beneath the B-movie trappings, The Wild Angels captured the central paradox of biker life (and by extension, the counterculture in general): What do you do once all the squares have been shocked, and all the taboos shattered? Maybe all that violence and pleasure lead to a dead end instead of the open road.

You can ride your machines without being hassled by The Man all you like, but you’ll only find the movie here. Despite some scratches in the print, however, it’s a crisp transfer that does right by the movie.