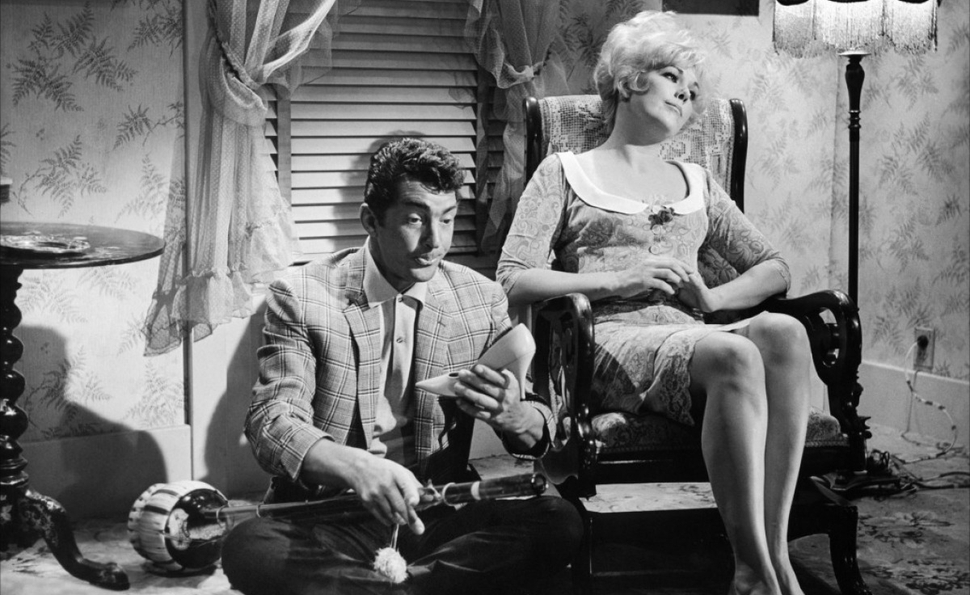 As Cameron Crowe’s book Conversations With Wilder works its way through Billy Wilder’s filmography, a pattern starts to develop: With few exceptions, Wilder’s assessment of his own work tends to synch up with commercial success. If a film was a hit, he remembers it fondly; if a film was a flop, he regards it bitterly. When Crowe gets around to one of Wilder’s most notorious fiascos, his approaches him as gingerly as a lion in a cage: “I have some questions about Kiss Me, Stupid, if that’s okay.” “It’s not okay,” Wilder quips, “but ask them.” From there, Dean Martin cracking crude jokes over lunch is the warmest memory he has about the whole miserable production.

Wilder was wrong about Kiss Me, Stupid, a fascinating and still-bracing farce on the foibles of humankind, but he had plenty of reasons to remember it sourly. He originally cast Peter Sellers in the lead role, but Sellers suffered a series of heart attacks and had to be replaced by Ray Walston, whose leaden performance punches a gaping hole in the center of the movie. Then the Catholic Legion Of Decency condemned the film, despite Wilder trimming the offending scene, and a skittish United Artists kicked it over to a subsidiary, Lopert Pictures, which released it to mostly withering reviews and dismal box office to match. After five straight movies that had earned Academy Award nominations—including all-timers like Witness For The Prosecution, Some Like It Hot, and The Apartment—Wilder’s hot streak came abruptly to a halt.

Looked at today, from a 50-year hindsight, Kiss Me, Stupid may look worse for some, particularly those inclined to apply 21st-century gender politics to an era when the question of a woman’s role was still up in the air. Adapting an Italian play called The Dazzling Hour, by Anna Bonacci, Wilder and his screenwriting partner, I.A.L. Diamond, were themselves at the tipping point between old-fashioned domestic values and smutty modernity, and the two women in Kiss Me, Stupid are batted around from one extreme to the other—a housewife, a prostitute, and then vice versa. But the overall tone of the film is one of comprehensive and breathtaking pessimism, even by Wilder’s impossible standards, and it gets knottier and more disturbing as it unfolds. No one comes away clean, least of all the audience.

Photographed in beautiful black-and-white Panavision, Kiss Me, Stupid opens with Dean Martin as Dino, performing a sold-out final show at the Sands in Las Vegas. Dino jokes and sings with a drink in one hand and a microphone in the other, and his boozing, carousing persona stays with him when he’s offstage, too: He brags of having chorus girls and other available women tucked away all over the Sands. But he needs to leave Vegas for now, and a detour leads him to a permanent pitstop in Climax, Nevada, a name as suggestive as it turns out to be ironic. As it happens, the gas-station attendant (Cliff Osmond) writes songs with Orville Spooner (Ray Walston), and when Dino rolls through town, the two men plot to get him to buy their music. After his partner cuts Dino’s fuel line, Orville graciously offers him a place to stay while he waits for repairs, but knowing Dino’s voracious appetite for women, the pathologically jealous Orville wants to keep him as far away from his beautiful wife Zelda (Felicia Farr) as he can. His solution: Be so cruel to Zelda that she leaves the house in a huff, then hire Polly The Pistol (Kim Novak), a waitress/prostitute from a roadside bar outside town, to pretend she’s his wife.

In what counts as either the Marilyn Monroe role or a commentary on the Monroe role, Novak is a marvel, a four-alarm sexpot who gradually transforms into the film’s faintly beating heart. Hired to play Orville’s wife for $25, she commits so entirely to the fantasy that when it’s finally time to submit herself to Dino’s boozy advances, it feels as cruel as when Orville provokes his actual wife to leave the house. (On their fifth wedding anniversary, no less.) Though Kiss Me, Stupid has the structure and comic beats of a classic bedroom farce—and a few of the naughty gags, too—it’s such an overwhelmingly cynical assessment of male jealousy and exploitation that the laughs stick firmly in the throat.

To that end, what Martin does in Kiss Me, Stupid isn’t the typical act of celebrity self-deprecation—or at least it doesn’t come off that way. There is no arc to Dino in the movie: That hard-drinking skirt-chaser on the Vegas state doesn’t change once he gets to Climax. His contempt for rubes like Orville and his lusty advances to the bombshell he believes to be Orville’s wife are not modulated, and his final act before splitting is what got the film in trouble with the censors. Martin probably didn’t want to come off so poorly, just as Wilder probably didn’t want Kiss Me, Stupid to come off so sourly. Sometimes artists aren’t in control of their art, and in cases like this one, the art is better off for it.