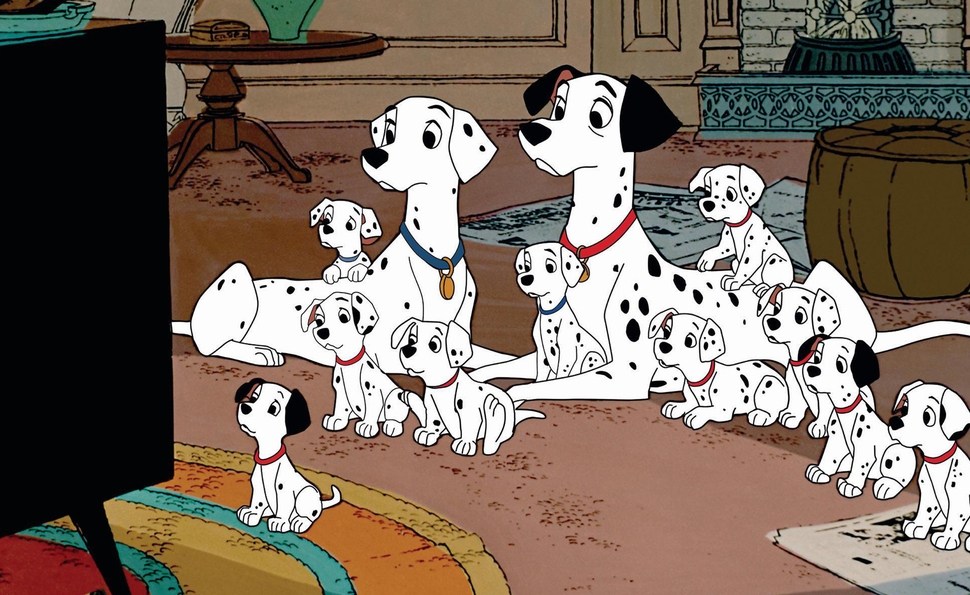 One Hundred And One Dalmatians

In 1959, when Walt Disney released Sleeping Beauty, it was the company’s most expensive, visually ambitious animated film. It also could have been its last. Disney was enjoying profits from theme parks, television, and live-action movies, but animation, the form that made it famous, was on the verge of becoming too expensive to continue. Enter Xerox, whose technology, as implemented by Walt Disney’s old partner Ub Iwerks, let Disney’s animators move much more quickly by eliminating the need to ink every cel by hand. Like a handsome prince sweeping in at the last minute, technology saved the day, allowing for the production of One Hundred And One Dalmatians, which became the top-grossing film of 1961, and a beloved classic for generations of kids.

There’s more to the story, though. In addition to putting a lot of people out of work, the absence of inking gave the final product a much rougher look than the lavish animation of past features, and no one noticed this more than Walt himself. On an old interview included on the short 2008 documentary “Redefining The Line: The Making Of One Hundred And One Dalmatians” included on the new Blu-ray edition, art director Ken Anderson recalls receiving the brunt of Disney’s disappointment, and only really feeling like Walt forgave him shortly before his death.

In truth, One Hundred And One Dalmatians does look different, which isn’t to say it looks bad. The Disney animators employ xerography well, treating it as a stylistic choice and working within its limitations, while still bringing the tremendous feel for character that had become the Disney signature. The differences extend beyond the new look, too. This is a strikingly modern Disney film, complete with a neon-drenched Piccadilly Circus in London, and a lot of satirical jabs at television, which the pups watch mindlessly, though adorably.

Yet however much the film breaks with Disney tradition, it’s still a winning effort that mixes cuteness with dry wit in the service of a fast-paced, emotionally charged adventure tale. Rod Taylor and Cate Bauer lead the canine cast as, respectively, Pongo and Perdita, a pair of dalmatians who wind up together after Pongo arranges a meet-cute between his bachelor “pet” Roger (Ben Wright) and Perdita’s single owner Anita (Lisa Davis). After Perdita gives birth to a litter of puppies—a scene the film stages in a way that captures the high tension of childbirth and concludes with a tearjerking little miracle—both the dogs and their human pets draw the unwanted attention of Cruella De Vil, an eccentric fur enthusiast with unsavory designs on their coats.

Animated as the angular face of cruelty and voiced by Betty Lou Gerson in an untraceable accent that makes “Dahhhling” sound like a threat, she’s the ideal villain for One Hundred And One Dalmatians, simultaneously ridiculous and dangerous. The film keeps playing with whimsical notions like the Midnight Bark, a secret communication channel used by England’s dogs, but never loses a sense of peril. Cruella’s henchmen Horace (Fred Worlock) and Jasper (J. Pat O’Malley), are buffoons, but they’ve got a sadistic streak that suggests, sure, they wouldn’t be above skinning a bunch of puppies for the right price. If they were a touch scarier, Dalmatians would be too much for young viewers, but the film treads a thin line well.

Ultimately, Dalmatians became a milestone in Disney history. The company’s subsequent features started to look cheaper, and the sensibility kept drifting away from that of the films that made Disney famous, at least until the Disney renaissance that kicked off in the late 1980s. But it’s unfair to lay the blame for that at the paws of this film, which wants only to charm and thrill people. It does just that, even if it doesn’t conjure up all the magic of the past in the process.

This new Diamond Edition of the film mixes a lot of features ported over from previous editions of the film (including the aforementioned, strong “Redefining The Line”) with some notable new ones. “Lucky Dogs” offers nice, though somewhat redundant, interviews with some of the animators who worked on the film, and “The Further Adventures Of Thunderbolt” fleshes out the heroic dog cartoon that enthralls the puppies. The most notable addition is a vintage episode of Walt Disney Presents that features a preview of the film alongside other, dog-related features hosted by Walt Disney and his own dog, Lady.

GoWatchIt: Buy. Rent. Stream One Hundred And One Dalmatians