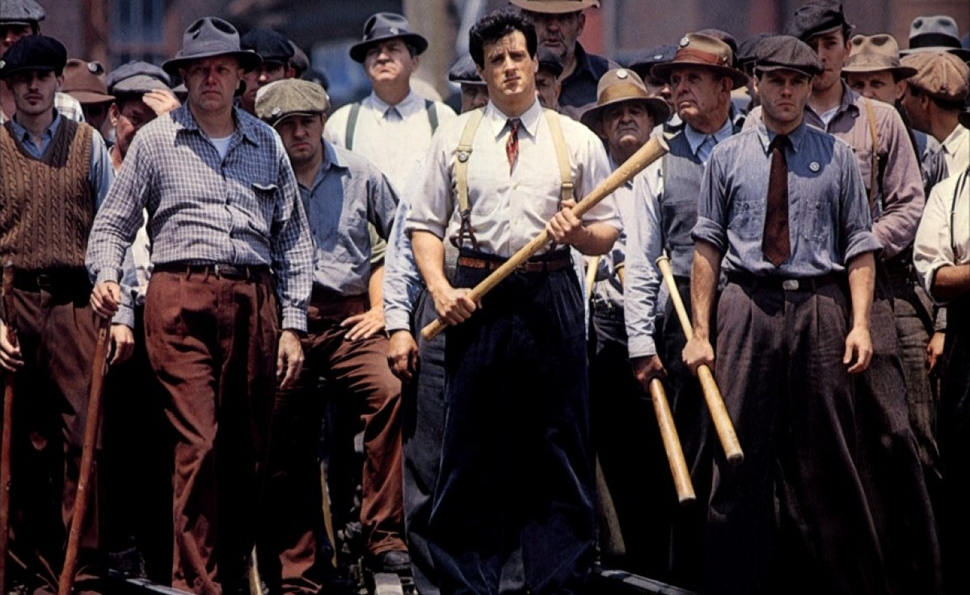 On the evening of March 28, 1977, Sylvester Stallone sat in the Dorothy Chandler Pavilion in Los Angeles as a double Oscar nominee, up for both Best Actor and Best Original Screenplay for his work on Rocky. Stallone won neither award, but Rocky did get named Best Picture—beating out All The President’s Men, Bound For Glory, Network, and Taxi Driver—capping an Academy Awards season where the showbiz press kept repeating the story of how Stallone fought to get his dream project made. At only 30, he was already a Hollywood legend, and everyone in town was excited to see what he’d do next, as an actor, a writer, or both. Stallone took his time to decide. And then he took on F.I.S.T.

Originally written by former Rolling Stone reporter/editor Joe Eszterhas, the F.I.S.T. screenplay was a hefty one, combining Eszterhas’ own memories of growing up in working-class Cleveland with a lightly fictionalized overview of the history of the Teamsters. Stallone plays the Jimmy Hoffa-like Johnny Kovak, a hot-tempered loading-dock grunt who gets fired by his employer after he incites a riot among his fellow workers over their appalling working conditions. Kovak then gets hired by F.I.S.T.—the Federation of Inter-State Truckers—to use his powers of persuasion to recruit new union members. Like a lot of the sprawling historical crime sagas of the 1970s, F.I.S.T. has epic aspirations, covering 20 years of Kovak’s life to show how he and his more level-headed best friend Abe (David Huffman) are changed by what they have to do—and who they have to associate with—to consolidate union power between 1937 and 1957.

F.I.S.T. wasn’t a flop, but it didn’t even come close to duplicating Rocky’s success, and it’s rarely listed among the great films of its era. Nor should it be. F.I.S.T. suffers some from Important Follow-Up Syndrome. Stallone came to the project with something to prove, and he made changes to Eszterhas’ script while trying to show a fuller acting range than in his breakout role. Stallone’s Kovak is by turns shrewd, big-hearted, tortured, and romantic. It’s a strong performance, but all over the map, and in the latter half of the movie—in the 1950s scenes—Stallone comes across more as an actor playing pretend than as someone living the part, the way he did with Rocky Balboa. Also, the message of the film feels predigested. From the moment Kovak has to ask for a favor from the mob, it’s clear that this is going to be a story about how high ideals are brought low by base need and greed. That’s a theme that was handled with more nuance and relevance by the same year’s Blue Collar (written and directed by Paul Schrader).

But while the guts of F.I.S.T. are too soft and bland, the film still has the body of a major motion picture. Even working with a middling script and a just-okay lead performance, director Norman Jewison and his creative team—especially cinematographer László Kovács, editor Graeme Clifford, and composer Bill Conti—made a movie that looks and sounds like it could’ve been mentioned in the same breath as The Godfather and Once Upon A Time In America, if the content had been a little stronger. From scene to scene, F.I.S.T. is often fantastic, and filled with powerful images—like a shot of strikers and strike-breakers having a stand-off in the streets of of Cleveland, challenging each other by clanking their baseball bats against the pavement.

In the arc of Stallone’s career, F.I.S.T. represents a road he didn’t stay on, toward more awards shows. For Jewison, though, F.I.S.T. is another in a long line of well-made films that excel in their particulars, even if they fall a little short as complete, complex pieces of cinema. This movie comes off at times like an illustrated newspaper editorial, tracing how bad bosses justify labor unions, but also how an adversarial relationship between employers and employees leads to violent power plays on both sides. F.I.S.T. moves fluidly and confidently, and at its best, it’s a study of one angry man, who doesn’t care about social justice as much as he cares about kicking back at all the bastards who kicked him first.

The lone extra on Kino’s Blu-ray is a good one: an 18-minute featurette on the making of the film, relying heavily on interviews with Jewison and Eszterhas. The two mainly focus on the difficulties of working with Stallone, who demanded changes to make his character more heroic, and initially claimed in the trades that he’d really written the movie—until it stalled at the box office, at which point he was more than happy to tip his cap to Eszterhas.