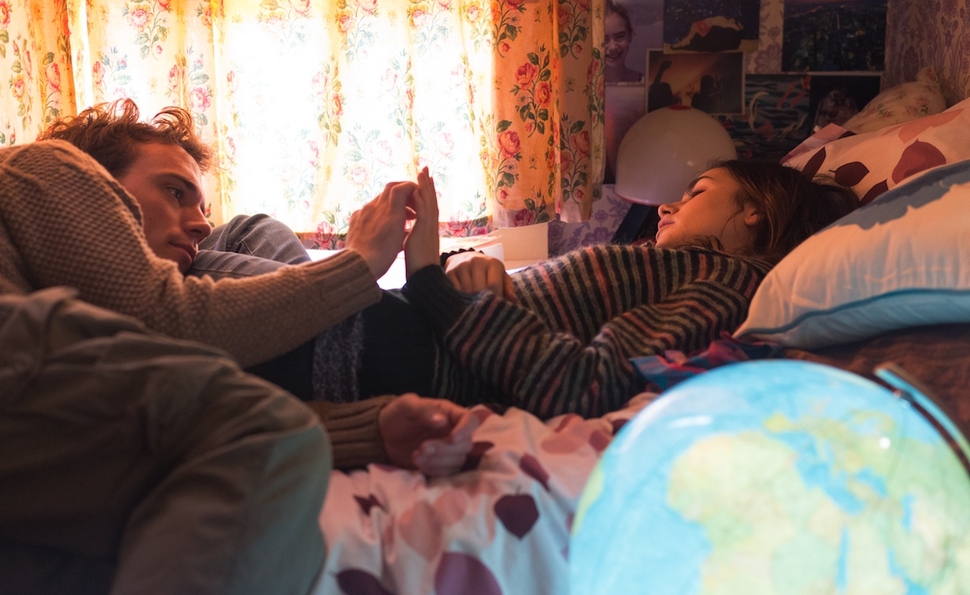 Plenty of romantic comedies are guilty of going the vague-hypnosis route when it comes to storytelling, repeatedly telling the audience that the protagonists belong together, rather than showing why through charming interactions or actual chemistry. Say it enough times—they belong together, they belong together—and everyone is bound to believe it, even if they’re not exactly sure why. Christian Ditter’s good-hearted and intermittently sweet Love, Rosie attempts through sheer force of will to convince viewers that its good-looking protagonists, Rosie (Lily Collins) and Alex (Sam Claflin), are a good match. Love, Rosie is more a psychological experiment than a romance, hinging on susceptibility to the powers of suggestion.

Rosie and Alex’s romance blooms from a long-standing friendship, supposing that just because people have loved and admired each other for the majority of their lives that they are somehow meant to be together. The film opens at a wedding—not Rosie and Alex’s, sadly—and zips back to high school to show us exactly how things went so very wrong for the fateful pair. Through a series of misunderstandings, secrets, and outright lies, Alex and Rosie continually miss connecting in a romantic way, often injuring their friendship in the process.

This goes on for approximately two decades.

Despite a fizzy and energetic tone that allows the time-spanning feature to clip along at a snappy pace, Love, Rosie stays refreshingly rooted to the real world for its first two acts. Rosie’s problems are real (Alex’s problems, which we rarely see, are oddly explained away as simply being indicative of his “fuck-up” lifestyle), and although the film occasionally glosses over them to deliver big-screen sheen, Rosie must still react and respond to some major issues, from a teen pregnancy to a derailed career. Later, things go a bit weird and haywire. (Why does it take Rosie, an ambitious and dedicated employee, over a decade to be promoted to receptionist at the hotel that employs her while her best pal Ruby was apparently hired for that same position years earlier?) But the majority of Love, Rosie doesn’t dance around the kind of relatable issues romantic comedies rarely allow to dominate their feel-good features.

Adapting Cecelia Ahern’s novel Where Rainbows End, screenwriter Juliette Towhidi is tasked with turning an epistolary endeavor (one kitted out with letters, emails, texts, and chats) into a workable screenplay. Although the film offers up a few snazzy bits of on-screen text to mirror its source material, they’re not overwhelming and they actually fit neatly into the narrative. (Special bonus: The film’s various chat screens and text message captures actually look like the kind of stuff audiences would interact with in the real world, not some strange proprietary technology invented mainly to confound viewers.) Ahern’s first novel, P.S. I Love You, also went the big screen rom-com route, thanks to Richard LaGravenese’s 2007 feature of the same name, which similarly featured a sweet story wrapped up in some real-world pain.

Towhidi’s script changes a number of details from Ahern’s book, sometimes in service to clarity—Rosie’s first husband and the father of her child, originally two different men, have been folded into one character who accomplishes the same purpose with ease—although it occasionally serves to add a little unnecessary drama. In Ahern’s novel, Alex’s entire family moves to Boston, while the film imagines it as a scheme for both Alex and Rosie to attend college there, though Rosie’s interest in the idea never seems keen enough for her to remember the difference between “Boston College” and “Boston University.” Unfortunately, the film frequently relies on telling over showing, and Rosie and Alex’s bond is rarely demonstrated through palpable on-screen chemistry. It’s enough to make any rom-com fan ache for talk-heavy genre offerings like You’ve Got Mail, When Harry Met Sally, and Sleepless In Seattle, which allowed their characters to actually get to know each other as they fall in love.

But Love, Rosie isn’t really kind of romantic comedy given to big declarations of love, which at least effectively jettisons overwrought cinematic troupes like the tried-and-true “run through an airport” scheme (hard to do with current aviation securities in place) or the perpetually popular “break up a wedding” scene (which has only ever worked in The Graduate, and even then to questionable results). Instead, the film goes for mostly low-key proclamations—a brief letter, a sad email, a one-line chat—that may not be as emotionally effective, but at least feel honest. Love, Rosie might not be able to mesmerize its mainly unconvinced audience, but it’s certainly sweet enough to believe in for a little bit.