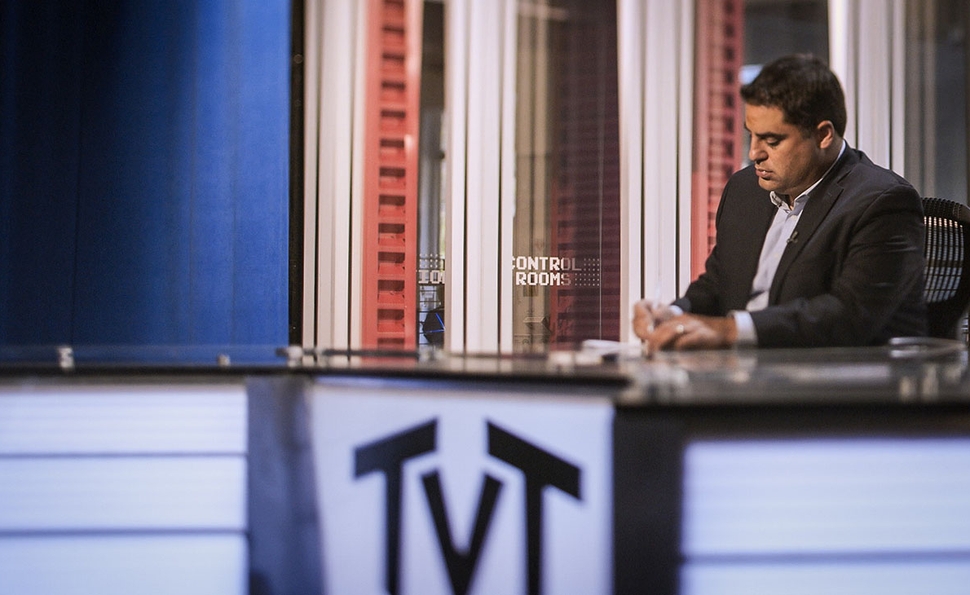 For Cenk Uygur, the grassroots-turned-mainstream-turned-grassroots-turned-mainstream-turned-grassroots scion of The Young Turks news show, the first impulse is to get his voice heard. His ideology has proven more elastic, having started as a conservative Clinton-basher on public-access television before the Monica Lewinsky scandal—and, later, George W. Bush’s various catastrophes, particularly the war in Iraq—led to disillusionment and a dramatic shift to the left side of the political spectrum. But the throughline in Mad As Hell, a hagiographic profile of Uygur’s multimedia adventures, is his need to be the loudest person in the room, a unique strain of broadcast narcissism that connects him with talk-show bloviators like Bill O’Reilly and Rush Limbaugh. In one scene, Uygur seems to welcome the comparison, suggesting that their willingness to be rude and “unprofessional” resonants with audiences in a way that eludes talkers of the left. His style is more combative and Keith Olbermann-esque: Fight fire with fire.

What’s fascinating about Uygur, though, is that his restless ambition and opportunism is linked to strongly held principles and a fierce independent spirit. His views are like wet concrete: Once they’re shaped in one way or another, they harden into unyielding ideology. Director Andrew Napier appreciates Uygur’s passion and irreverence—hence the title, a reference to Peter Finch’s famous meltdown in TV news satire Network—but doesn’t get the distance to draw much insight from a man who isn’t without his contradictions and controversies. There’s a promotional bent to Mad As Hell that whiffs more of branding than rigorous documentary filmmaking.

Mad As Hell follows the rise and rise of Uygur and friends, from the between-two-ferns humility of public access to major radio and cable networks to their current position as YouTube rabble-rousers. In fact, the pace of change—partly driven by Uygur’s ambition, partly by a rapid evolving media scene—is so fast that Napier spends much of time his time just trying to keep up. After cutting his teeth on D.C. public access, the Turkish-American  Uygur made the leap into a real (albeit down-the-dial) paid television gig in Miami, where he met radio and TV personality Ben Mankiewicz, who started using him as a writer and, later, on-air commentator. In Los Angeles in 2002, Uygur, Mankiewicz, his childhood friend Dave Koller, and co-host Jill Pike launched The Young Turks as a radio show for Sirius and it remains an ongoing enterprise; the film is bookended by the gang celebrating 1 billion views at a YouTube studio space. Though TYT has always been part of Uygur’s portfolio, his involvement has wavered at times over the years, as MSNBC started putting him in heavy guest-host rotation and Al Gore’s Current TV gave them a show from September 2011 to August 2013, when it was sold to Al Jezeera America.

There are times when Mad As Hell resembles Startup.com, the great Jehane Noujaim and Chris Hegedus documentary about idealists trying to make a go of it during the dot-com boom—though it should be said that Uygur isn’t as eager to line his coffers with venture capital. Napier has behind-the-scenes footage from all of TYT’s various incarnations and the cast of characters around Uygur has remained remarkably consistent, however unstable the operation has seemed at times. But Mad As Hell leans too hard to talking-head interviews to tell the story, which suggests that Napier’s access was either too limited or not rigorous enough to get strong fly-on-the-wall material. And that conventional style, in turn, makes the documentary seem like a gloss, more the work of a fan than a filmmaker.  High-profile personalities like Uygur are scrutinized heavily in the political sphere; he could stand a little more pushback here, too.