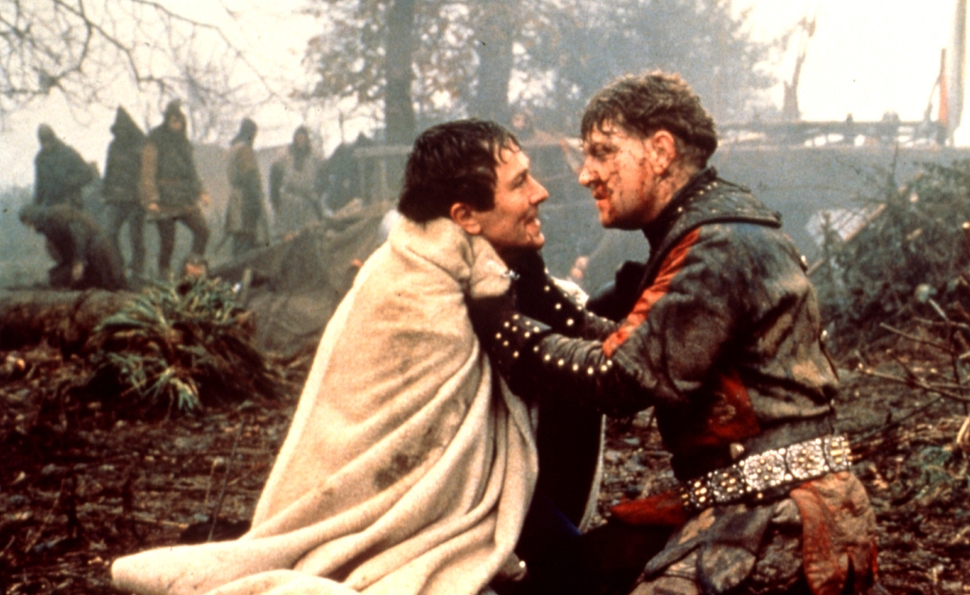 Kenneth Branagh was still in his 20s when he made his feature-film version of William Shakespeare’s Henry V, but he was already being talked about as the next Laurence Olivier: a classically trained actor and director who could lead his peers, make the theatrical canon accessible to contemporary audiences, and die a legend. Instead, Branagh has proved more mortal. As an actor, he’s settled into a career of doing character parts in Hollywood films and leads in British TV, between occasional returns to the stage. As a director, he’s stayed committed to adapting Shakespeare, but has also signed on to helm routine blockbuster action-adventures like Jack Ryan: Shadow Recruit. It’s been an enviable career by any common measure—just not exactly the one Branagh seemed like he was set to have back in 1989.

Watching Shout! Factory’s new Blu-ray edition of Henry V, it’s striking how baby-faced Branagh looks, and how confident he is behind the camera. He gives himself a memorable introduction as King Henry, magisterially entering a throne-room with a flood of light silhouetting him. Then he begins to speak to his advisers in a calm murmur, as though overcompensating for his youth by trying to sound controlled and nonchalant. The title character stays at center stage for most of Henry V, delivering speeches and strategizing over how he can expand his reign from England to France. Branagh makes each of Henry’s big moments memorable, striking different tones in his performance, and giving each its own look—from the slowly circling camera during Henry’s soliloquy to the muddy realism of his addresses to the troops.

Yet the 1989 Henry V is just as much of a showcase for Branagh’s contemporaries and mentors. The cast-list is practically a who’s-who of British show-business, from venerable veterans like Ian Holm and Judi Dench to up-and-comers like Robbie Coltrane and Emma Thompson. (Even a teenage Christian Bale pops up briefly, playing “Robin the luggage-boy.”) This wasn’t a case of Branagh making use of whomever was available. Just as King Henry fought to unify England and France, Branagh was bringing together stalwarts of the London stage with a new generation that had apprenticed in university revues and televised sketch comedy. Beyond Branagh, the film’s breakout star was Thompson—his wife at the time—who has Henry V’s funniest scene as a French royal who’s appalled by the blunt ugliness of the English language. Thompson brings a different, brighter color to Shakespeare than someone like Dench, who gets her own spotlight moment, and excels by playing it with more brooding intensity. Branagh saw the value in both.

Prior to this Henry V, the most renowned movie version was Olivier’s from 1944: a semi-experimental piece that combines purposefully stage-bound scenes with some that are much more naturalistic. The 1989 Henry V has its moments of overt artificiality, too. Derek Jacobi begins the film with a direct address to the camera from what looks like backstage at a theater, and throughout Henry V, Jacobi returns periodically, in modern dress, roaming through the camps and battlefields like the host of some BBC documentary about famous historical sites.

Otherwise, Branagh contemporizes Shakespeare by using Henry V as the outline for a war movie. His approach to this material is similar to what Mel Gibson later did with Braveheart, and David Benioff and D.B. Weiss with Game Of Thrones: combining high-minded political intrigue with blood-spattered cheap thrills. The man who went on to direct Thor is very much evident in Henry V’s big Battle Of Agincourt sequence, which emphasizes the brutality of combat, then ends with a long, elegiac tracking shot across the corpse-strewn aftermath. There’s a boldness to Branagh’s Henry V, which shows off the cinematic possibilities of Shakespeare without a lot of distracting razzle-dazzle.

But as much as Branagh’s Henry V announced his promise as an auteur—a promise he has yet to fulfill—it also revealed an actor with a rare understanding of how to leave his mark on a character many have played before and since. Branagh the filmmaker does a favor to Branagh the star by incorporating flashbacks into the film, giving himself a chance to play Henry as the eager, impressionable young “Hal,” and to show how he grew into a leader. Even as a king, Henry talks to his subjects as though they were brothers or cousins, earning their loyalty by fighting right alongside them. By the time Branagh’s Henry delivers the St. Crispin’s Day speech, it’s easy to see why young and old alike would follow this character—and this actor/director—wherever he commanded.

Special features: None. This Blu-ray cannot hold the vasty fields of a commentary track or featurette.