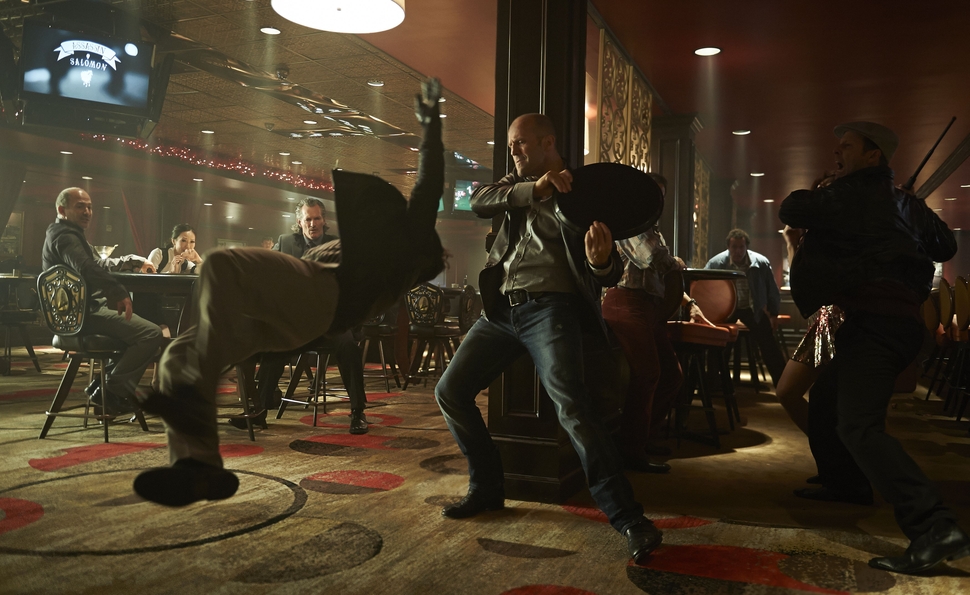 Lots of anti-hero films give their protagonist a gambling problem, but Wild Card finds a pretty fascinating way to do it—or as fascinating as a movie can get when it stars growly-voiced puncher Jason Statham as a bodyguard named (wait for it) Nick Wild. The film waits until the halfway mark, after Nick has scored a sizable cash sum by doing something seedy and revenge-y, which he then multiplies by 10 during a blackjack hot streak. He’s got enough to quit the inglorious Las Vegas bodyguard life and retire to Corsica. But as Nick gathers up his chips and approaches the exchange table, director Simon West cuts to slow motion. Nick’s knees seem to buckle, and he can barely stand upright.

What’s happening to Nick? Has he been drugged? Are casino security swooping down on him? No; turns out he physically can’t allow himself to leave without risking everything on one last fool’s round. It’s a gamble for West, best known for boom-boom stuff like Con Air and The Expendables 2, to insert an extended tricky sequence where one of Hollywood’s biggest badasses battles nothing but his own free will, and loses. Granted, this isn’t a big gamble for a cheap 90-minute formula movie. It’s like beating the house on a $10 craps table.

Nick is a tough-talking security guy and pal to the Vegas underworld who lends his services to tourists, like a boyish 23-year-old millionaire who only drinks Fiji water (a surprisingly funny Michael Angarano). As is typical for tough sensitive guys, he’s also a watchful protector of young women, so when an escort friend (Dominik García-Lorido) turns up beaten and bloodied, Nick sets his sights on the skeeze-muffin who did it (Milo Ventimiglia, doing some great goatee acting). There’s a cringe-filled scene involving the villain’s small penis and a pair of pruning shears, so… mission accomplished?

Legendary screenwriter William Goldman, of Princess Bride and All The President’s Men fame, adapted Wild Card’s screenplay from his own novel Heat. It’s also a remake of the 1986 film Heat—not the Michael Mann Movie Of The Week, but the Burt Reynolds debacle that went through six different directors, one of whom Reynolds attacked on set. The beats of Wild Card’s story are practically identical to Heat’s, which seemingly indicate Goldman and the film’s producers also have a gambling problem. Hopefully they headed off any animosity this time around with an on-location shoot in Corsica, giving the cast a Mediterranean vacation for what, in the final cut, amounts to 30 seconds of sailing footage.

The rest of the film doesn’t feel particularly coherent, mainly because the story moves with the help of cameos rather than character development. Sofia Vergara, Jason Alexander, and Stanley Tucci show up for one scene each, Tucci having the best time as a hotel owner who tries to goad the bad guy into pulling down his pants. Hope Davis and Anne Heche also appear in brief roles that amount to little. The film doesn’t ask its stars for much, and they deliver.

There’s also the bare minimum amount of Jason Statham punching people that the film needs to use his punch-face on the poster, although the action scenes have no arc, and the villain doesn’t even fight back during the climactic bloody brawl. Well, they did their duty. Off to Corsica.