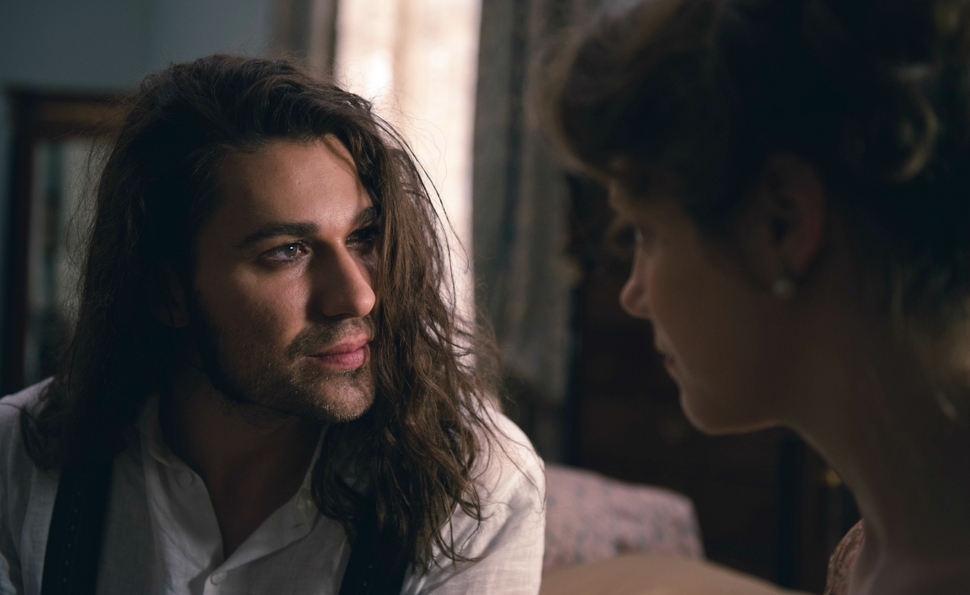 Even for international musical star David Garrett, playing Italian composer/performer Niccolò Paganini in The Devil’s Violinist has to have been a bit of an ego-boost: The panting costume drama posits Paganini as a 19th-century rock star, complete with heaving-bosomed women at his concerts shrieking like teenagers watching The Beatles at Shea Stadium, and occasionally fainting dead away. Early on, a syrupy fixer named Urbani praises Paganini, by way of explaining to the audience exactly how they should feel when they hear his music: “You are an innovator. In your hands, the violin is an orchestra. You have discovered harmonies that no one imagined existed. It is almost as though you have fashioned an entirely new instrument.” Even for someone literally trying to purchase Paganini’s soul for the devil, that’s laying it on pretty thick.

But “laying it on pretty thick” is a consistent groove for The Devil’s Violinist, which tries to remake Milos Forman and Peter Shaffer’s Amadeus with a different real-life subject, and without the enmity that defined Shaffer’s story. Paganini’s lack of a suitable nemesis isn’t a problem: He does a fine job of being his own worst enemy. But while his story follows the Amadeus arc along meticulously precise beats—childhood prodigy becomes spoiled superstar becomes debt-ridden failure becomes diseased, fading tragedy, with pauses along the way for a defining romance—it still lacks a sense of shape, or a sense of stakes, to go with its pounding melodrama.

One key issue is the way The Devil’s Violinist handles its music, primarily Paganini compositions that Garrett arranges and performs. Amadeus took time to contextualize Mozart’s music through the eyes of a worthy fan, an aristocrat who’s so keenly aware of his rival’s genius that he’s forced to acknowledge it against his will. Even so, Forman doesn’t linger long on any one composition; he expects his audience to understand the beauty of what they’re hearing, but not sit still for an entire opera as illustration. Writer-director Bernard Rose (Candyman, Immortal Beloved) treats the film more as a showcase and a concert opportunity, giving Garrett center stage to perform multiple full-length compositions, which slam the story to a halt.

Granted, the story already has its issues without the long musical interludes. It presents Paganini as a promising childhood prodigy who grows up into a sullen wastrel with no traction in the Italian music scene of 1830; desperate to get his work to the public, he sneaks onstage after an opera and plays for the dispersing crowd, which laughs at his wild, avant-garde notions of music. When Urbani (Jared Harris) oozes into Paganini’s room later that night, he explains that Paganini just needs to be packaged correctly. One signed contract with the devil later, Paganini is performing to rapturous, packed crowds who believe the myths Urbani has used to sell him.

There’s a germ of a significant film there, based in how Paganini feels about audiences won over more with illusions than with his talent. But it’s one of many ideas Devil’s Violinist refuses to explore, and they’re all bound up in an unwillingness to explore Paganini’s identity as a person rather than an icon. He’s full of conflicts: He claims he lives only for music, but takes every possible chance to not play it. He says he wants to tear the world apart with his talent, but when invited to London for a concert series, or asked for a crown performance in England, he shrugs both off without significant explanation. He refuses to rehearse, barely shows up for his own performances, and generally buries himself in idleness and hedonism. By the time Rose sets him up with a love story that’s meant to partially humanize and redeem him—a crush on his London agent’s daughter Charlotte (Andrea Deck), whom he only falls for when she repeatedly refuses his casual advances—he’s already set himself up as a hateful prima donna and a wasted talent, unpalatably determined to use, abuse, and alienate everyone around him. If that were the story, if his early failures had given him a bitter determination to hurt others as he was hurt, this story would have a sense of depth. But Garrett’s performance lacks any nuance or fire. When he’s playing, he’s a powerhouse. When he’s talking, he’s a half-presence with a vaguely Tommy Wiseau-esque accent, and sleepy eyes to match.

Rose seems to have had a significant budget for this film. In the private settings, it reads as a live-action romance-novel cover: Garrett always seems to have his touseled, dark hair slung loosely over half his face as he slouches in various rumpled beds full of naked women. But the film’s larger world is sumptuously costumed and decorated. Garrett lacks a professional actor’s fluidity and naturalism, but Rose compensates with a strong supporting cast, including Charlotte’s father and stepmother (Christian McKay and Veronica Ferres), a sarcastic newspaper muckraker played in drag and with delicious swagger by Joely Richardson, and a prim temperance leader (Olivia d’Abo) determined to persecute the dissipated Paganini. Even Harris as Urbani gets plenty of sleazy screen time; Satan’s point man is awfully lacking in supernatural abilities, and he wears visibly thin in trying to keep boosting his bratty, uncooperative client.

But the scale doesn’t matter when the story is lacking a meaningful form, and when it tries so hard to compensate with heavy-breathing overstatement. “Señor Paganini… I just want to know… if these hands… are touched by angels… or by the devil,” Richardson’s character gasps during a private tête-à-tête in a carriage. Elsewhere, Paganini notes that the first violinist of his orchestra has a respectable instrument, and publicly takes it, without comment, as his due; after a major concert, the owner mumbles, “You can have my violin for a sixpence. I could never touch it again after what I’ve heard tonight.” No amount of international-superstar violin playing could live up to such silly hyperbole, and no amount of talented support cast or well-appointed set-craft could compensate for it.