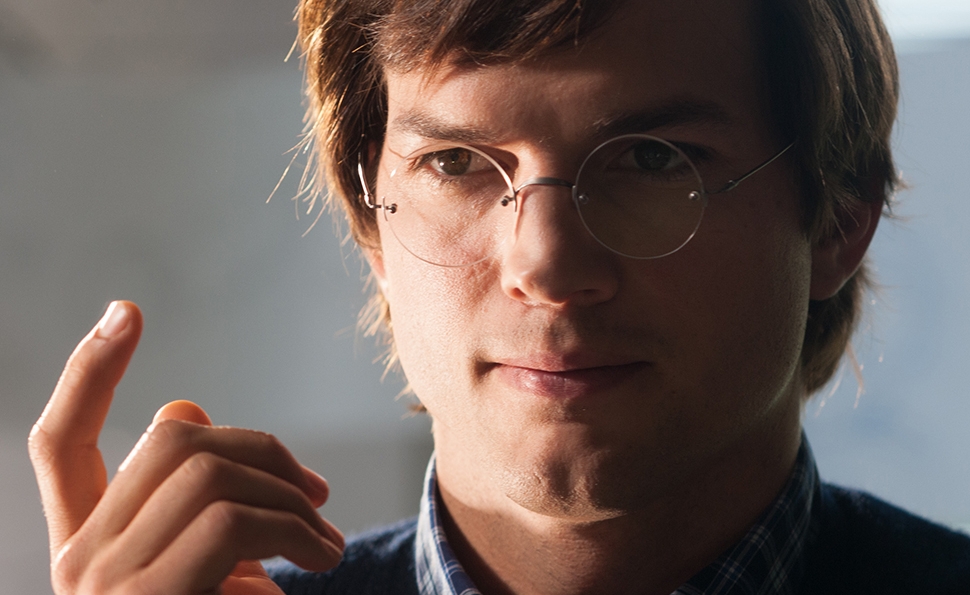 Two films don’t necessarily suggest a trend, but the summer of 2013 may go down as the beginning of the era when cinema prostrated itself before the gods of technology. Back in early June, Vince Vaughn and Owen Wilson embarrassed themselves while espousing the glory of Google in the richly merited flop The Internship, a feature-length commercial for the popular search engine thinly disguised as a slobs-vs.-snobs underdog comedy. Meanwhile, Jobs, Joshua Michael Stern’s biopic of late Apple CEO Steve Jobs, depicts the release of Apple’s “1984” commercial and the recording of its “Here’s to the crazy ones” ad campaign with a trembling reverence more befitting The Sermon On The Mount than an advertisement for a consumer product.

Within the shamelessly hyperbolic context of Jobs, however, these commercials are no mere sales pitch. They’re truly transcendent and inspired pop art. They’re more than that, even: They’re prophecies that announce—boldly, unabashedly, and so loud that the whole world can hear—that the future will proceed along the elegant lines laid out by Steve Jobs. They’re portents of tomorrow, heralding that the weird little gizmos Jobs and his team willed into existence would forever change the way technology was distributed, consumed, and made.

For Jobs, there was no reason advertising couldn’t be art, just as there was no reason the circuit board of a computer shouldn’t be aesthetically pleasing just because no one other than a computer technician was likely to actually look at it. Jobs was a zealot for quality and beauty, and Jobs faithfully perpetuates the cult of personality its subject cultivated around himself and his products—even as it depicts him as cold, callous, and so devoid of empathy that he sometimes borders on sociopathic, a man who habitually parked in handicapped spaces just because he could.  Consequently, Jobs is a hagiography of an asshole. That’s not as much of a contradiction as it might seem, since Jobs’ strengths and weaknesses were inextricably intertwined: The same ferocious will and reluctance to compromise that made him a giant of technology and entertainment also often made him a nightmare.

Jobs’ life and career offer an embarrassment of riches for biographers, cinematic and otherwise, and Jobs leaps giddily through time as it chronicles the man’s evolution from an idiosyncratic hippie ambling about Reed College to an all-powerful corporate titan. The story of Jobs, played here by Ashton Kutcher, is too overflowing with triumph for one movie, so Jobs only tackles part of its subject’s eventful existence, opening with him as a college dropout and ending with his return to Apple in the late 1990s following a long period in the wilderness. Vast periods in Jobs’ life and career are skipped over, or handled via a single breathless montage, as if the filmmakers decided to adopt the iPod’s “shuffle” feature as its overarching aesthetic, confident that no matter where they land in the chronology of Jobs’ life and career, an epic victory or crushing defeat is sure to follow.

Over the course of the film, Jobs weeps a single perfect tear (while tripping on LSD) to mourn his the parents who abandoned him, and later another single perfect tear to mourn his own abandonment of his illegitimate daughter. But mostly, Jobs is devoted to its subject triumphing over small minds and cowardly corporate thinking, set against an endlessly flattering backdrop of golden light and swelling strings. Playing the preeminent secular saint of the online age, Kutcher captures Jobs’ iron will and pummeling intensity, if not his intimidating intelligence. Unfortunately, there’s nothing to Kutcher’s depiction but iron will and pummeling intensity; it’s a one-note performance of a supremely complicated figure. Josh Gad is much better as Jobs’ former partner Steve Wozniak, a sweet-natured teddy bear of a man with a unique link to Jobs’ oft-buried vulnerability and humanity. Gad’s Wozniak is the soul and conscience of Steve Jobs and the film; it’s too bad he disappears for great stretches of time, a victim of the film’s addled storytelling, only to return at a narratively convenient time to deliver a stirring life lesson to Jobs.

Jobs was an inveterate showman and an architect of big moments, but he was also a brutally unsentimental minimalist who believed in stripping his products down to their core so that their inherent essence would shine through. In that respect, Jobs betrays its subject’s sensibility: It’s bloated, overwrought, and nakedly sentimental, a sappy and cliched celebration instead of a searching and incisive exploration. Even worse, Jobs is mediocre product, the kind that would have thrown Jobs into a rage. Jobs’ genius lay in making the seemingly geeky domain of the home computer sexy, hip, dynamic, and fun. His less-than-genius biopic fails to accomplish the same miraculous feat.