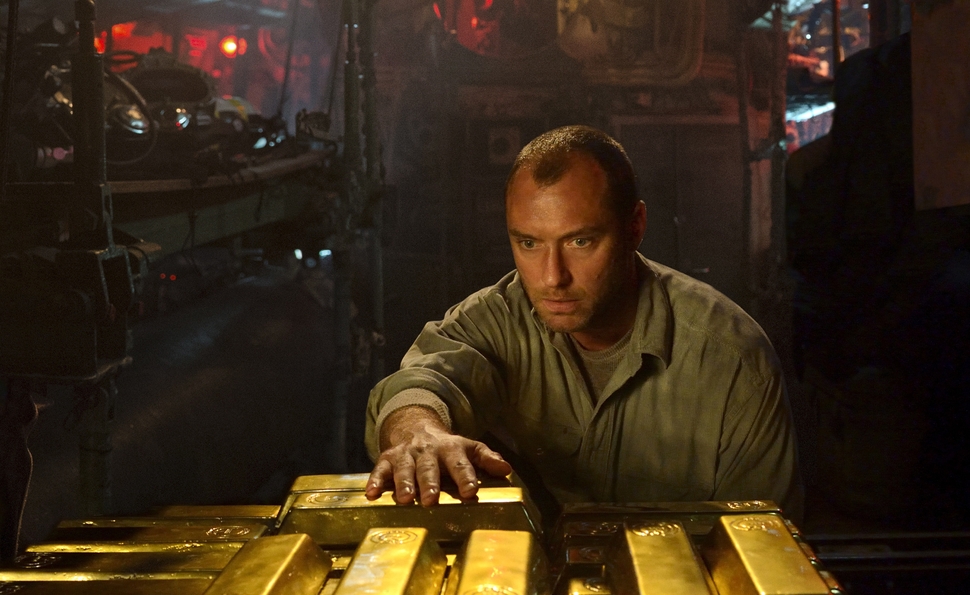 Somewhere in the Black Sea, a World War II-era submarine rests on a shallow ocean ridge, laden with two kinds of treasure: dead Nazis and their forgotten gold. Kevin Macdonald’s Black Sea loosely rejiggers history to allow for such a fantastic-sounding story—and such a treasure—to be pursued in a tightly wound twist on the common heist film. Dennis Kelly’s script imagines that Adolf Hitler and Joseph Stalin’s non-aggression pact of 1939 featured a little sweetening of the pot, with Stalin paying Hitler millions of rubles in gold bars to not invade the Soviet Union. That plan didn’t exactly work out for Stalin (Germany still invaded the Soviet Union, though Black Sea supposes that said invasion happened relatively quickly after the cash exchange), but Hitler’s men made off with a sizable cache of gold in a U-boat. Unfortunately for them, that sub ran aground somewhere near present-day Georgia, and was never seen again. Submarines: surprisingly easy to lose.

Many years later, Jude Law’s mononymously-named Robinson (much like Cher or Madonna, but with a better British accent) is similarly dumped and forgotten, as the salvage company to which he’s devoted his life unceremoniously fires him, simply because it no longer has any need for a submarine captain on the payroll, even one as good as Robinson. Submarine captain: a surprisingly hard job to maintain.

Distraught by the unfairness of his firing, Robinson vaguely casts about for a way to get his revenge against an unfeeling corporation, and perhaps more accurately, an unfeeling world. His friend Kurston (Daniel Ryan), who was also laid off by Robinson’s former employer, and who has suffered mightily in the interim, has an idea: Rob the abandoned U-boat of its treasure, using their own submarine as an unexpected getaway vehicle. Turns out, Kurston found the U-boat in question while on a job for the duo’s old company, and while the heartless corporation knows roughly where the sub is located and what it probably contains, it’s unable to plunder the vessel because of shifting boundaries and convoluted politics.

The film’s lack of interest in addressing the finer points of Robinson and Kurston’s plan makes it evident early on that any troubles Robinson and his motley crew face won’t spring from whatever scheme they’ve dreamed up: Black Sea zings from the mere mention of available cash, not even actual gold, to the entire operation being financed and put into motion in two quickly assembled scenes. Instead, the pressure cooker of living in close quarters with the promise of a fat paycheck will sink them, thanks to pervasive grudges and a coterie of unstable personalities. There’s the claustrophobic banker (Scoot McNairy) who serves as the middle man to the group’s seemingly savvy financier; the psychopathic diver (Ben Mendelsohn) whose skills excuse his unpredictability; and the wide-eyed kid (Bobby Schofield) Robinson takes under his wing, all sardined together into a rickety sub that’s full-to-bursting with animosity between its Russian and British inhabitants.

Robinson soon becomes possessed with the idea that their glorified heist is the ultimate middle finger to his former bosses—to all former bosses, really—and his obsession with getting revenge begins to overwhelm and drive his every action. Robinson’s gaze is almost comically misguided; if anything, he should take pleasure in stealing cash from the ultimate bad guy (Hitler, obviously), but he’s so single-minded that even sticking it to history’s greatest monster can’t break his train of thought.

Law’s performance is a high point of the film, and although Kelly seems to have written Robinson in gruff, broad strokes, Law finds the grays in his personality and plays them to fine effect. Robinson may be mainly driven by revenge, but Law makes it clear that he’s also a good man, a dedicated captain, and a skilled leader. As the situation in the creaking submarine deteriorates, Robinson holds fast, and Law’s assured performance keeps the feature chugging right along into increasingly dark waters.

It’s obvious something bad will happen during the group’s mission, thanks to a first act that’s built on steadily rising tension, and to Kelly’s script, which gradually layers on different stakes while never letting anyone forget that death itself is literal inches away. (This really is an exceedingly rickety sub.) Macdonald (director of The Last King Of Scotland and The Eagle, and a Best Documentary Oscar-winner for One Day In September) doesn’t overplay the claustrophobic elements of his story. Instead, he relies on twisted interpersonal relationships and human fallibility to make Black Sea churn. The film’s last half is a marvel of tight, escalating tension, and an ambitious, literally pressure-filled action sequence near the end of the film’s second act is simply magnificent.

The film runs aground, however, when it attempts to dive deeper into moral quandaries. As Robinson’s desire for revenge begins to consume him, and Black Sea seeks to impart bigger lessons about human nature itself, its previously crisp direction and white-knuckle tension fades. Not content simply to make a finely tuned undersea action film, Macdonald reaches for something more significant and comes up short, trapping his own treasures under a tidal wave of thwarted ambition.