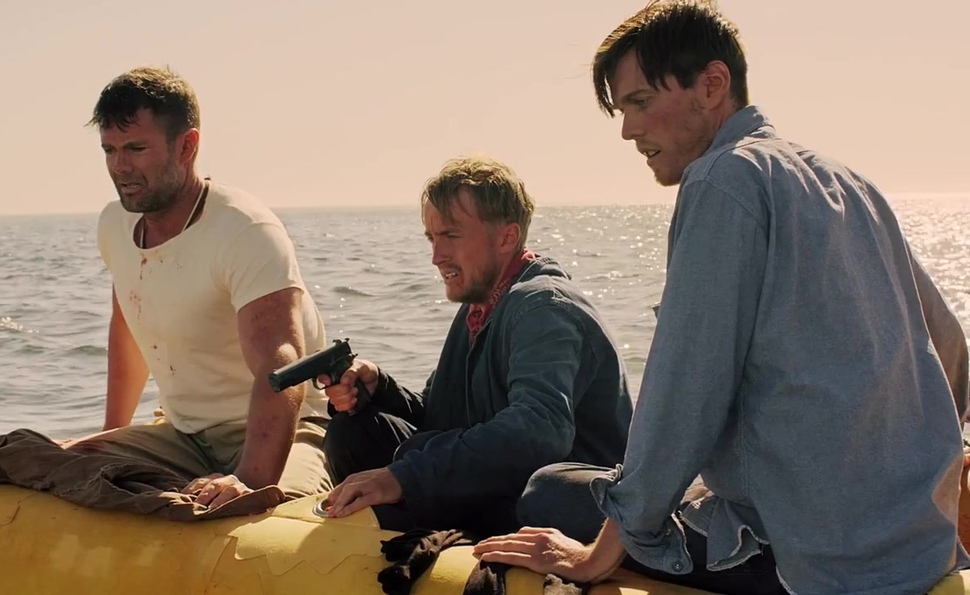 The debate over historical accuracy in Hollywood is cyclical and never-ending, though it isn’t as pointless as film writers and industry types often make it out to be. There’s a wide gap between the creative liberties taken in Selma and the ones taken in Foxcatcher and The Imitation Game, where significant subtext is invented out of whole cloth for spurious rationales. And as this year’s Oscar season starts to wreak havoc on hearts and minds, that gap is worth exploring with more than a shrug.

So the middling new World War II survival film Against The Sun arrives at a useful moment. Its production house, The American Film Company, touts commitment to reality as its biggest selling point, and has made a show of bringing on historical consultants to oversee the production of its past true-life films like The Conspirator and Parkland (about, respectively, Lincoln’s and Kennedy’s assassinations). The movie keeps to the course of its true story: Three Navy men crash into the Pacific Ocean while hunting for Japanese fighters and survive 34 days rafting on open water with no emergency supplies. Yet such surface-level veracity does not make Against The Sun a truer film.

The three men are pilot Harold Dixon (Garret Dillahunt of Deadwood), bombardier Tony Pastula (Tom Felton of Harry Potter, managing a pretty good Youngstown, Ohio middle-America accent), and radioman Gene Aldrich (Jake Abel of The Host). After the crash-landing, Dixon asserts chain-of-command over the others, dictating what gets thrown overboard and professing a navigational knowledge of the Pacific that has, in truth, eluded him. Dillahunt is strong in moments where his character uses indignation as a mask over his own shortcomings.

There are several ways director Brian Falk and co-writer Mark David Keegan could have chosen to depict their heroes’ time at sea without sacrificing the story’s basic framework. There’s the stripped-down, strictly formalist route J.C. Chandor took in 2013 with All Is Lost; the dream-heavy, fantastical approach of Ang Lee’s Life Of Pi; the pulpy dread of Alfred Hitchcock’s Lifeboat. These are all works of fiction, but they each communicate, in their own way, something true about the idea of being adrift at sea. Against The Sun, like its rudderless seacraft, goes with the path of least resistance: a talkfest where the men reiterate every obstacle they face out loud (all the better to show off period-friendly dialect), engage in some temporary breakdown of friendly bonds, and pray. There’s nothing wrong with this approach, but there’s also nothing special about it.

Shot by Petr Cikhart, the day scenes have the majestic quality typically seen in ocean films, the gleaming water stretching out before the trio in unbreaking blues. The nights are infuriatingly dark, with no light source, making the crew’s actions during these segments nigh-unreadable. Perhaps the filmmakers have adopted parts of Lars von Trier’s Dogme 95 movement in a bid for aesthetic accuracy. Flashbacks, smartly kept to a minimum, give Dixon’s crew cause to argue about just who is to blame for the tumble from the sky.

Those flashbacks, though? They’re the product of dramatic license. So is a brief but beautiful hallucination of a young woman sitting quietly on the surface of the water, surrounded by an all-white furniture set. And so is dialogue that, while it may actually have been uttered by the survivors, functions within the context of the film as foreshadowing for specific bullet points in the uplifting epilogue. These are all ways of reframing true events into a classical structure that’s familiar both to mass audiences and to accuracy-dictating financiers, but is likely not how Dixon’s crew experienced them.

No matter how much the American Film Company insists otherwise, movies can’t be 100 percent accurate when the medium depends on a perfect sequential visual and dramatic buildup that never happens in real life. But there is a way, in a movie like Against The Sun, to ensure that everyone’s sunburns look real, and to some, that’s enough of a victory.