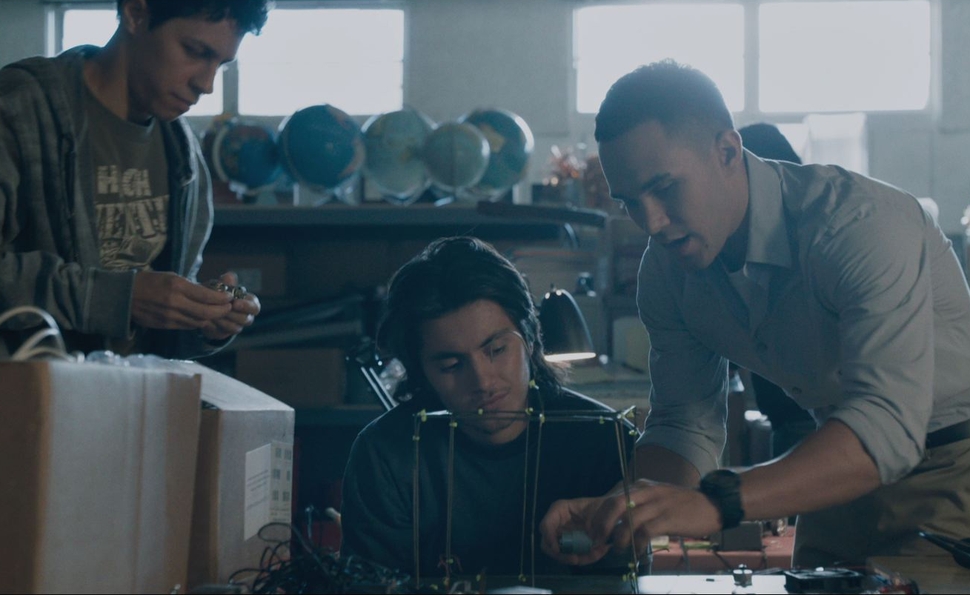 Four Mexican-born teenagers from a public high school in Phoenix were never supposed to show up teams from Cornell, M.I.T., and other prestigious universities participating in an engineering competition that required them to build a robot capable of performing delicate tasks underwater. But in 2004, that’s precisely what happened when a team from Carl Hayden Community High School made their way to UC-Santa Barbara under the guidance of a pair of science teachers who ran a robotics club. The upset became the subject of “La Vida Robot,” a popular Wired story writer Joshua Davis later expanded into the book Spare Parts. It inspired both the 2014 documentary Underwater Dreams and legislators supporting the DREAM Act, who could point to it as a notable achievement made by undocumented immigrants trying to succeed in America. It’s a remarkable story retold unremarkably, but not badly, in the inspirational drama Spare Parts, a conventional but affecting underdog drama.

Compressing two teachers into one, George Lopez plays Fredi Cameron, a down-on-his-luck engineer who takes a job as a substitute teacher as he waits for a better gig to come along. Fredi hopes to do the bare minimum at the school, though he tells the school’s principal (Jamie Lee Curtis) that he hopes to inspire the next generation. He’s disappointed, then, when a student shows up to the after-school engineering class he’s required to offer as part of his employment. An ROTC member turned down by the Army because of his undocumented status, Oscar (Carlos PenaVega) brings the robotics competition to Fredi’s attention, and soon they’re enlisting a ragtag group of students to help them out: the book-smart, bullied Cristian (David Del Rio), the mechanically gifted Lorenzo (José Julián), and the towering Luis (Oscar Gutierrez). The neat meshing of their talents would seem too scripted if it didn’t square so well with the descriptions in Davis’ article, and first-time screenwriter Elissa Matsueda smartly incorporates a lot of details from that piece: Cristian living in a plywood attachment to his parents’ house; the irony of Oscar being unable to serve the military of a country that wants to deport him; a lot of details about how they put together a working robot for less than $1,000. (By comparison, M.I.T.’s budget stretched upward of $10,000, and had sponsorship from Exxon.)

The overly familiar elements mainly involve the grown-ups. The film grinds to a halt whenever it pauses to explain Fredi’s tragic past, or pushes him toward a romance with a fellow teacher played by Marisa Tomei. Both Lopez and Tomei are fine in the parts, but it’s a story that’s been told too many times before. The kids, on the other hand, have much more interesting stories, and the young cast plays them well. Director Sean McNamara (Field Of Lost Shoes, Bratz: The Movie) brings little flair to the project, but the film benefits from a lot from his unfussy, on-the-ground location shooting, particularly in a series of scenes set in the Latino-owned businesses that sponsor the team, which look nothing like the usual Hollywood depictions of such places.

The best element of Spare Parts is often this sort of matter-of-factness, both about the world of its characters and their day-to-day existences. Lionsgate and its production partner Pantelion have mostly marketed Spare Parts to the growing Latino audience, bypassing critics’ screenings in most cities. There’s an education here, however, for those outside that community who make assumptions about undocumented immigrants. The film refreshingly portrays its kids as part of a diverse group trying to succeed in a country in which they can never find secure footing. That’s the big-picture story here, and one even the occasional underdog cliché can’t obscure.