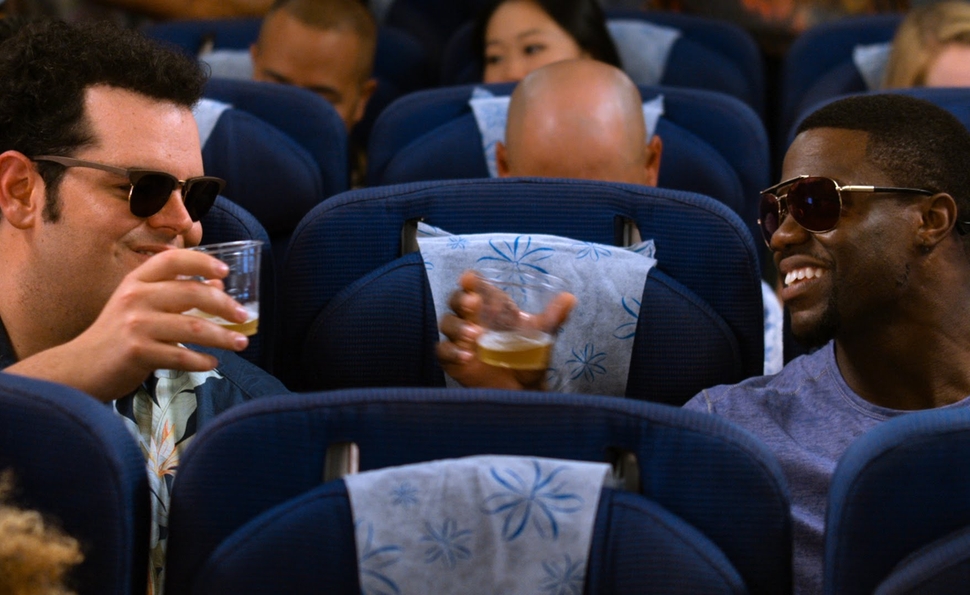 In the dreadful comedy The Wedding Ringer, the title character, Jimmy Callahan (Kevin Hart), advises the seven fake groomsmen he hires out for weddings to develop and perfect party tricks to distract attendees from noticing that nothing about them or their supposed relationship with the groom makes any sense at all. So it’s entirely fitting that the film uses plenty of party-trick-style distractions itself, in a transparent, woefully unsuccessful attempt to pretend that its premise isn’t an ugly melange of plot holes, duct-taped together with montage sequences and regrettable gender and sexual politics.

The implausibilities begin with the idea that Doug Harris, played by Josh Gad at his sweatiest, least confident, and most pratfall-prone, would have the confidence and guile to take over his father’s tax-law business and snag a fiancée as well-put-together as Gretchen, played by The Big Bang Theory’s Kaley Cuoco-Sweeting. Keep in mind: This spineless pile of goo doesn’t have a single male friend or relative to serve as his best man, or as a groomsman, for his wedding in 10 days. He’s that lacking in charisma.

Rather than encouraging his employees or professional associates to stand up at his wedding by promising them preferable treatment at work, Doug employs one of those magical elves who exist only in particularly desperate romantic comedies: Jimmy, a professional best man who makes the groom look not just impressive, but like a veritable superman. In exchange, he charges a steep fee, then vanishes into the mist once the job is done. But rather than hiring a group of people who might resemble the groom-to-be in age, class, education, interests, or life experiences, Jimmy assembles a multi-racial, multi-generational group of goofy, goony, Diane Arbus-friendly faces who could only have met at a later-day audition for The Gong Show.

To keep audiences from noticing just how little sense the plot makes, the filmmakers speed this parade of grotesques through an endless series of montages, many involving dancing (the better to show off the surprising agility of Broadway veteran Gad) and others involving retired professional football superstar Joe Montana. The idea is to keep the action at a fast pace, overwhelming audiences with slapstick zaniness so they can’t notice that the film is built upon a rotten, crumbling, vaguely hateful core.

The film’s lazy reliance on distraction extends to keeping its female lead underwritten and unsympathetic. She doesn’t seems like the groom’s true soulmate so much as a controlling shrew just biding her time until she can reveal her true motives and personality, preferably while the groom coincidentally happens to be within earshot. The film tardily answers the nagging question of why a superficial, looks-obsessed sexpot like Gretchen would want to wed a self-esteem-impaired dope like Doug: It telegraphs, then flat-out explains, that like most women, she’s kind of evil, and cannot be trusted.

Hart is at his best when he’s playing an underdog whose motormouth fake confidence plays against his diminutive stature and high-pitched voice, but The Wedding Ringer makes him all smoothness in the face of adversity. The Wedding Ringer is a buddy comedy far more than a romantic comedy, so it takes time out from extended bestiality gags and bachelor-party wackiness in favor of syrupy scenes where Doug and Jimmy trade sob stories. (Doug’s deal: His tax-attorney dad moved all the time, so there were never any opportunities to lay down roots and make friends. Jimmy’s: Despite his seeming self-confidence and alpha-male assurance, he’s ultimately just a lonely, directionless man desperately in need of a friend.) The Wedding Ringer is a movie about weddings, but it’s perversely uninterested in heterosexual romance, which might explain why its best scene consists of Gad and Hart exuberantly dancing together, without a whit of self-consciousness, let alone gay panic. It’s the one brief moment when the film’s strong, consistent “Bros before hos” stance seems innocuous.