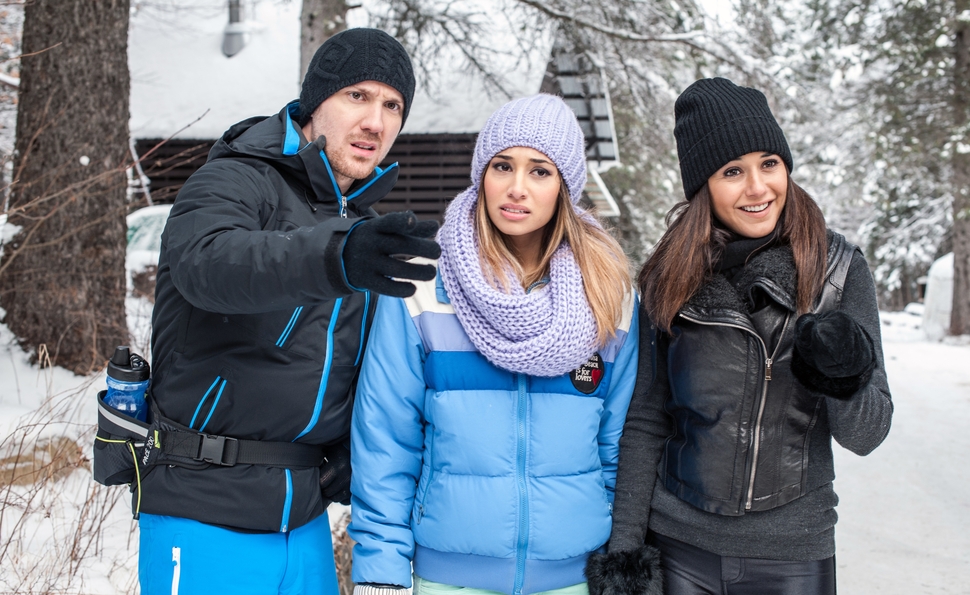 The old adage warns that when your heart’s on fire, smoke gets in your eyes. It’s an elegant statement, but the frank version is just as honest: “Love—and its slightly more powerful cousin, Horniness—can compel folks to do some awe-inspiringly self-destructive shit.” All throughout Pat Kiely’s middling Three Night Stand, the hypnotic allure of a lovely lady keeps baby-faced protagonist Carl (Sam Huntington) from acting on his better judgment. He constantly behaves in ways that anyone not doped up on hormones would recognize as ill-advised, leaving a trail of comic setpieces in his wake. The film, however, emulates its main character’s complete misestimation of human behavior and general cluelessness a bit too faithfully, with more dismal results.

Carl’s first boner is also his biggest and most destructive: In an effort to give his stagnating marriage a shot in the arm, he coordinates a snowy weekend getaway for spouse Sue (Meaghan Rath) at a ski lodge he once frequented with Robyn (Emmanuelle Chriqui), the Sloan-from-Entourage who got away. Don’t worry, multiple characters point out the core foolishness of this decision to Carl. But by then, it’s far too late.

Apparently, Robyn cherished those salad days spent rutting at the inn so much that she purchased it to cope with a difficult breakup, prior to the events of Three Night Stand. Carl has no idea that Robyn treated the ski lodge like her personal pint of Ben & Jerry’s, and because both Carl and Robyn used false names while emailing about the reservation—a sizable plot hole over which the script half-assedly brushes a few leaves and twigs—an awkward triangle forms over the weekend. High-decibel relationship arguments follow, and only a few of them end with reconciliatory snow-sex (the logistics of which are baffling).

Premises predicated on farfetched tests of a relationship’s strength unite smaller-scale fare and conveyor-belt studio comedies alike. Usually, a nuanced understanding of the tricky interplay between feelings and acts separates indies from their big-budget brothers. Last year’s The One I Love, for instance, sequestered a fragile relationship and bent it to the breaking point, teasing out the details of human pettiness, neediness, and affection along the way. At no point does Three Night Stand match those levels of empathy, sadly. Carl and Sue behave with the complexity of later-generation Sims, whirling from love-dovery to floating red exclamation points of anger within seconds. The obviousness with which Rath and Huntington emote only underscores the film’s facile understanding of romantic behavior. It’s a bummer, too, because when Carl and Sue aren’t mooning over each other, or performing selections from Who’s Afraid Of Virginia Woolf?, Huntington and Rath nicely affect the naturalistic patter of a long-term couple at ease with each other. Their marriage only feels real when they aren’t playing husband and wife.

The distinguishing element in Three Night Stand happens to be the weird, unexpected depths to which it willingly takes its saucier material. Sexual frankness pushes past the humor of discomfort into a plane of profound displeasure. An early romp in a car quickly segues from a frisky thrill into a haunting, joyless, mechanical procedure. Further perversions await, including an incestuously icky mother-son pair of French Canadians, ejaculation gags, and a botched tryst atop a Ski-Doo, all awash in surprisingly creative and specific dirty-talk. The film’s unexpected nastiness has a way of livening up its otherwise tired story beats.

Three Night Stand’s teeth are a tad sharper than those of the standard rom-com, but it will be remembered for its flaws, if at all. Its most bothersome misstep isn’t even that crucial, but it’s still eminently distracting: What unholy blood pact did Carl sign to earn the affections of these two disproportionately exquisite women? It’s a cockeyed sort of mathematics that pairs the spectacularly good-looking Rath and Chriqui with the aggressively plain Huntington, but the physics governing the indie-film universe only vaguely resemble our own. At times, it’s as if the lodge itself projects some sort of field that saps the intelligence and common sense from all who enter it. A heart on fire makes smoky eyes, but here, the entire ski lodge is ablaze, and it’s Kiely who’s blinded.