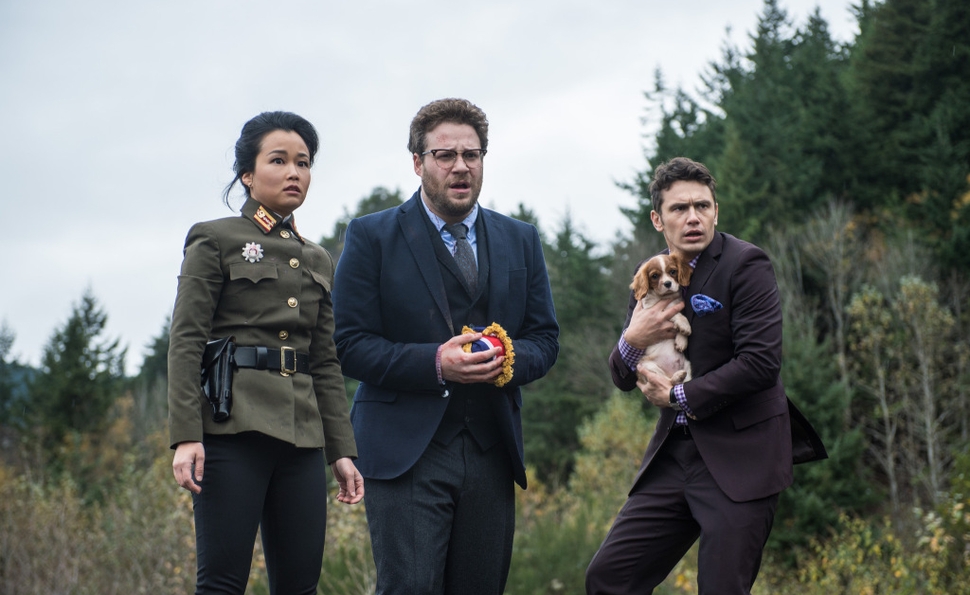 Here it is. After a declaration of war, a trove of hacked emails, a horrific threat of terrorism, an unprecedented reversal of a major blockbuster release, some tut-tutting from President Obama, international cyberwarfare, and a nation celebrating the Alamo Drafthouse’s scheduling of a Seth Rogen comedy like it’s The Act Of Killing in Indonesia, any American with an Internet connection can now watch James Franco attempt to assassinate an actor playing Kim Jong-Un. And just in time for Christmas. To paraphrase Watchmen: Santa exists, and he’s American.

The uproar surrounding The Interview concerns not the film but its logline, in which Franco’s idiot talk-show host lands a sit-down with the Supreme Leader and the CIA recruits him to do its dirty work. Kim Jong-Un, it seems, is a big fan of Dave Skylark (Franco) and his celebration of immoral American capitalism. It might have been fun to hear why, but this detail is unexplored. Skylark and his trusty producer (Rogen) journey to Pyongyang with government-approved assassination weapons on their person. It’s the latter detail that seems to have caused so much trouble—not so much the mockery of American celebrity talk shows, which North Korea would probably support. The Interview has already succeeded as a free-speech provocation; whether it also succeeds as comedy is another matter entirely.

First the good news: The worst things the Internet is saying about the film are, by and large, not true. The movie does not point and laugh at suffering North Korean citizens. No one would call its geopolitical satire “smart,” but its makers are at least aware of the larger issues plaguing the Hermit Kingdom, such as how the Dear Leader withholds resources from his people, and how his propaganda system works to burnish his own myth. Screenwriter Dan Sterling was an executive producer on The Daily Show in 2006, the middle of the golden era for America’s most influential comedy export, so he (mostly) knows how to avoid xenophobic trappings.

Now the bad news. Even with a strong first half lampooning the vapidity of American news media, The Interview is the worst thing Rogen has ever done. He and co-director/screenwriter Evan Goldberg often get pigeonholed as “stoners” and “slackers,” even though their output (the glorious Superbad, the transcendently weird This Is The End) is more ambitious and whip-smart than most mainstream comedy. But here the accusation of laziness fits for once. The Interview’s jokes fall flat not because they’re stupid—political comedy has a long-standing fruitful relationship with stupidity—but because the stupidity doesn’t rise to the occasion. None of the bromance, butt humor, dick humor, gore, and innuendo lands when the target is something real, like North Korea’s brainwashing tactics or the absurdity of the Demilitarized Zone. This approach could have worked, but it doesn’t. A running joke about Kim’s supposed lack of an asshole ends with Skylark saying, “Ladies and gentlemen, Kim Jong-Un has just pooped his pants.”

The Interview’s smartest idea is that an American TV journalist who spoon-feeds his viewers tabloid gossip is perfectly susceptible to North Korean propaganda. Upon arriving in the country, Skylark sees one cardboard cutout of a Pyongyang grocery store and is ready to insist the country has no famine; he bonds instantly with Kim Jong-Un over their shared love of tanks without questioning what the Supreme Leader might be doing with his. The film’s production design subtly reinforces the connection, as even the American set of Skylark Tonight is bathed in a lush shade of Communist Red. But Rogen and Goldberg never fully commit to the darkness of this vision—and neither does Franco, who often ends his line deliveries as though he has already lost interest in them.

The guy who comes out of The Interview the best is Kim Jong-Un himself; or rather, Randall Park, the virtuoso actor who plays him. Park flips on a dime from adulating superfan to power-hungry maniac, drinking margaritas and singing Katy Perry tunes with an aw-shucks charisma that is all the more dangerous for how convincing it is. Who wouldn’t fall in love with this guy? It’s a performance in line with comedic depictions of dictators as impish children throughout film history, and the only part of the movie that can measure up to its oft-cited precedent, The Great Dictator. There’s no chance in hell that Sony is getting anywhere near North Korea again, but Rogen and Franco could make a more dangerous and cutting film from Park-as-Kim’s point of view. They could even keep the same dick jokes.