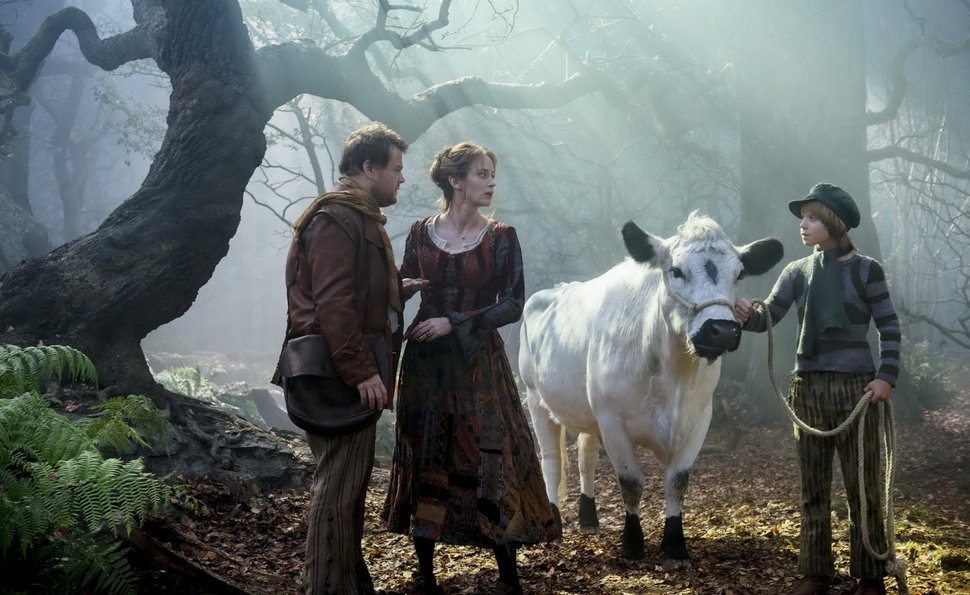 Transitioning Broadway’s Into The Woods to the big screen is an endeavor that benefits from stellar raw material, but also a high degree of difficulty. Arguably the most complex of Stephen Sondheim’s famously tricky musicals, the fractured fairy tale combines mind-bogglingly intricate songs and a bifurcated structure that stitches together a handful of familiar Brothers Grimm stories—Cinderella, Jack And The Beanstalk, Little Red Riding Hood, and Rapunzel—before ripping them apart in calamitous fashion in the second act. With such strong, beloved material, performed by a cast of game professionals with established musical-theater chops, all director Rob Marshall had to do was not muck it up. And if he could add some cinematic flair to a traditionally stagebound story, as he did with 2001’s Chicago, all the better.

Unfortunately, Marshall’s contributions to Into The Woods not only fail to elevate the source material, they often actively detract from it. Luckily, the musical is sturdy enough to withstand such undercutting, but outside of some delightful performances from bona fide movie stars, there’s little in Marshall’s Into The Woods to justify the leap to the big screen.

The problems start early, with a staging of the opening nine-part musical prologue—often referred to as “I Wish…”—that reveals the difficulties in translating Sondheim’s plot-driven ensemble numbers to the screen. (Those difficulties contributed to the notorious excision of the show-stopping “Ballad Of Sweeney Todd” from Tim Burton’s 2007 Sweeney Todd adaptation.) The obstacle course of a song features half a dozen characters rapidly trading speak-sung lyrics that establish their individual reasons for venturing into the nearby woods: Red Riding Hood (Lilla Crawford) to see her grandmother; Jack (Daniel Huttlestone) to sell the dried-up family cow, Milky White, in the next village over; Cinderella (Anna Kendrick) to visit her mother’s grave to ask for help attending the big festival; and a baker (James Corden) and his wife (Emily Blunt), hoping to gather four objects that will let The Witch (Meryl Streep) lift a curse she placed on their home, which left them unable to conceive the child they desperately want. It’s a breathtaking number that’s cut to ribbons in Marshall’s hands, with the camera rapidly cutting among characters with little attention to flow or clarity, only to who happens to be singing at the moment. Considering Marshall played so freely with montage and “dream theater” in Chicago, it’s surprising, and dispiriting, that he takes such a literal, unimaginative approach here.

The cuts continue throughout the film, some welcome and necessary—Johnny Depp’s short appearance as a randy Big Bad Wolf mercifully comes and goes without the appearance of wolf-dong—and others befuddling. (The fate of Rapunzel, played by Mackenzie Mauzy, is glossed over to such a degree that she basically disappears three-quarters of the way through the film.) In addition to being just plain bad storytelling, the decision denies audiences the stage musical’s reprise of the film’s show-stopping number “Agony,” a duet between Cinderella’s Prince (a delightfully smarmy Chris Pine) and Rapunzel’s Prince (Billy Magnussen). Pine and Magnussen’s campily swooning performance of “Agony” is a highlight of Into The Woods’ first half—albeit one tonally at odds with the rest of the mostly dour film, and at moments, even with itself—and the decision to abandon it in the story’s more difficult second half undermines the emotional payoff, as well as the characters themselves. Meryl Streep’s Witch faces a similar fate, but first, she gets in her own big number, the roiling, powerful “Last Midnight.” Streep sings the hell out of the difficult solo, emoting as only she can, but, as with Rapunzel, her fate is maddeningly abrupt.

Along with Streep, Blunt and Corden are the glue that holds this gutted Into The Woods together. The Baker and his wife are the story’s emotional conduits, and Blunt in particular does admirable work navigating their characters’ complicated arc, which forces them to reckon with the big-picture cost and fallout of their individual, personal wish. That theme extends to all of the characters to one degree or another, and it becomes more explicit as the film moves into the musical’s second act, but the transition is clumsy in the hands of Marshall and James Lapine, adapting his own book for Into The Woods. Without the benefit of an intermission and the scene-resetting “Act Two Prologue” (which echoes the opening number, but was cut from the film, presumably to keep the runtime under three hours), the film crashes inelegantly into its second half, losing much of its message along the way.

As a film, Into The Woods is trapped between the stage and the screen, at odds with both its source material and its adopted medium. The visuals often reflect this schism, switching between effects that evoke traditional stagecraft (a puppet-like giant’s arm swooping down from the sky, billowing fabric to represent the supernatural) and the blazingly artificial CGI that’s become so common in big-screen fairy tales in recent years. That might be chalked up as an artistic choice, if the rest of the film weren’t so visually muddy: Marshall and cinematographer Dion Beebe favor an incongruously gray, gritty palette that calls to mind Beebe’s previous film, Edge Of Tomorrow, more than Chicago, which earned him an Oscar nomination. And the film is oddly airless at times, particularly toward the anticlimactic end, when all the remaining characters appear to be confined to a 10-by-12-foot plot of woodland. It all adds up to the sense that something extraordinary, performed with skill and panache, has magically been rendered utterly average.