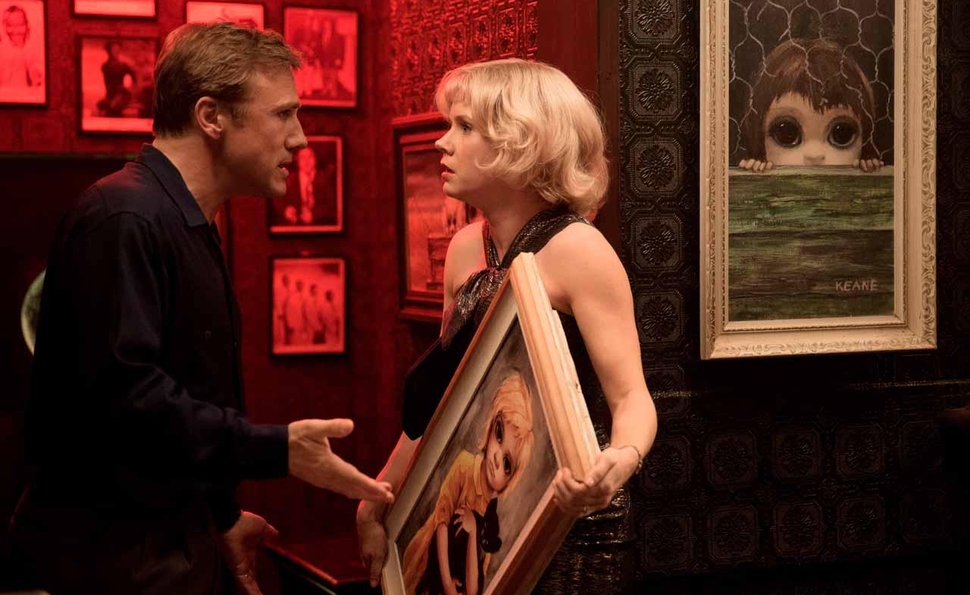 Beginning in the late 1950s, America began to be overrun by big-eyed children. The invasion had a clear point of origin: San Francisco, where an art-world denizen named Walter Keane began peddling paintings of waifs with slightly alien features, sometimes posing with small animals, sometimes not, sometimes crying, sometimes merely on the verge of tears. Keane, who claimed to have been inspired by the children he encountered in post-war Berlin, became famous, then rich, when he began mass-producing the images. Soon they could be found hanging on wood-paneled walls throughout the country, becoming as much a fixture of the era as Henry Mancini albums and Rob Roys. He even got the 1964 World’s Fair to accept a huge canvas called “Tomorrow Forever”, the “Guernica” of the Keane oeuvre, only to watch as a stinging review from New York Times critic John Canaday scuttled the Fair’s plans to exhibit it. If that slight hurt, well, who needs critics? At least Keane still had many fans who loved what he did.

The problem: He didn’t do it. While Walter Keane hobnobbed with the famous, his wife Margaret lived in virtual seclusion, turning out painting after painting to meet the demands of a waif-hungry public. The truth of the story wouldn’t emerge until after the Keanes’ separation, and even then Margaret had to fight to prove the work was hers via a trial so strange that it reads like a Hollywood invention.

Fittingly, maybe inevitably, that trial provides the climax of Big Eyes, Tim Burton’s retelling of the Keanes’ strange story. It also injects a bit of much-needed oddness into an unexpectedly conventional biopic. Here Burton re-teams with Scott Alexander and Larry Karaszewski, the screenwriting duo behind Ed Wood. One of the director’s best films, Ed Wood treads the line between comedy and tragedy in telling the story behind one of the worst movies ever made and the delusional director behind it. Big Eyes contains comedy and tragedy, too, but they pair much less agreeably here, in part because each of the film’s two protagonists belongs much more to one world than the other.

First seen flirting with customers during an outdoor art fair where he peddles uninspired Parisian street scenes, Walter is presented as a buffoon. Even when he descends into drunken threats, Christoph Waltz keeps his performance comic, even clownish, as he pursues fame in the oiliest way possible. His Walter Keane is another of Waltz’s memorably dangerous charmers, but he’s ultimately too broad a character for the film. By contrast, Amy Adams plays Margaret as an inherently tragic woman, fleeing one unhappy marriage in the film’s first scene only to end up in the middle of another that leaves her neglected, deceived, and unable to take any pleasure in her work. Both are fine actors, but they don’t make sense together here. It’s kind of like watching a Douglas Sirk heroine fall for, then get exploited by, a Looney Tune.

That mismatch aside, Big Eyes still has a fascinating story to tell, and Burton spares no Camelot-era detail in telling it, re-creating the world of Beat-era San Francisco and shooting a Hawaiian honeymoon in glowing Technicolor tones. The film’s strongest when showing how the waifs made their way from San Francisco out into the rest of the world, first by hanging on the walls of a club (the Hungry I in real life, a fictional club owned by Jon Polito’s character here), then through mass production. (At one point, Walter claims Warhol stole the idea from him.) It also deftly depicts how sexist expectations make it easy for Margaret to get overlooked as Walter takes advantage of her. What it doesn’t offer is much of a sense of how the Keane paintings fit into that world, or why it went so mad for them in the first place. The film’s best scene, a trip to the supermarket leads Margaret to hallucinate a world of big-eyed people after she sees her work being sold alongside stacks of groceries, teases bigger themes than Big Eyes cares to explore.

The film also doesn’t show much interest in exploring whether or not Margaret’s art is any good. Simply by putting him up against Walter, Terence Stamp’s Canaday emerges as a righteous defender of good taste. Yet Adams, much like Johnny Depp in Ed Wood before her, brings a soulful sincerity to the role, playing Margaret  a committed artist who, even working under duress, treats every saucer-socketed creation as one from the heart. Her work mattered deeply to her, and something in it resonated with a public that never knew the story behind it. Big Eyes tells that story, and it’s a good one. But it misses a chance at telling a bigger story in the process.