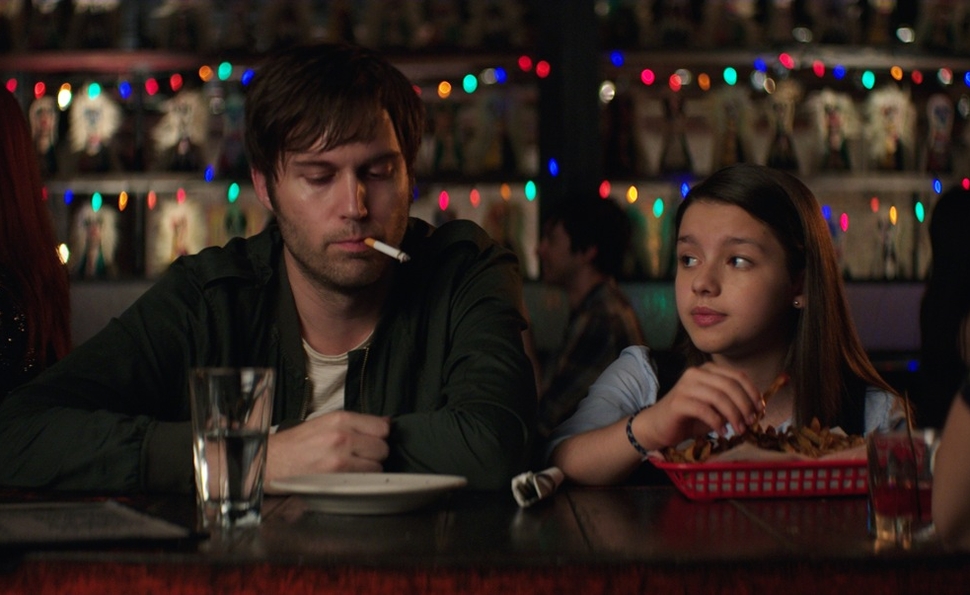 Before I Disappear, Shawn Christensen’s feature-length extension of his Academy Award-winning 2012 short “Curfew,” begins with a scene like a Rorschach blot. The audience’s interpretation of the film’s opening five-or-so minutes can reliably predict the varying mileage they’ll get from the next 90. Chronic screw-up Richie (Christensen) ends his shift on the shit-mop at a seedy New York watering hole by discovering a young woman’s corpse on the toilet, needle still in her arm. After a few halfhearted words of consolation from his boss, Richie has had enough of sorry scenes like this, and decides to do something about it by going home and slitting his wrists in the bathtub. Just as he closes his eyes and settles, Jaws-style, into the red water, his phone rings. It’s his estranged sister (Emmy Rossum), breaking a five-year silence with a desperate plea for him to pick up her daughter (Fatima Ptacek) from a poetry-recitation competition. He obliges her, crawling out of the tub, wrapping up his forearms, and taking off.

Depending on a given viewer’s outlook, Richie’s narrowly foiled attempt to follow the recently departed can be read as destiny, good luck, bad luck, or meaningless happenstance. Or it can be read as the sort of pivotal coincidence that only ever takes place within indie film debuts, the kind of similarly gritty-soulful appraisals of life’s value that regularly sweep the awards sections at SXSW.

Richie makes it to Sophia’s prep school in time to see her flawlessly rattle off “Because I Could Not Stop For Death” in English and Mandarin. (Christensen’s unattractive tendency to lay on the thematic significance thick starts early and continues throughout.) He drops her off at his sister’s posh apartment building and beats a retreat home to finish what he started earlier that evening. One more failed suicide attempt later, Sophia has been entrusted to the care of the profoundly untrustworthy Richie while his sister waits to be released from jail following a physical altercation with her boyfriend. Before I Disappear tracks the uncle/niece odd couple over the ensuing night as they acclimate to each other’s diametrically opposed lifestyles and learn that maybe, just maybe, they aren’t so different after all.

The unlikely friendship that gradually blossoms between Richie and Sophia feels preordained from the moment she’s placed under his tutelage. But the fundamental predictability of Before I Disappear’s main plot is just one of the missteps that betray Christensen’s inexperience. His dialogue could use some serious tightening up—to convey that Richie doesn’t know what to live for anymore, Christensen has him say, “I don’t know what there is to live for anymore”—and the subplots he’s grafted onto the original short pad the run time to feature-length, but contribute little else.

As a director, Christensen operates at two settings: Drippy Sentimentality and Miserablist Hopelessness. His film unspools in separate worlds, and never the twain shall meet. One is a never-slumbering cesspool of human degradation, a squirming pit of filth and wretchedness. The other might be a little scary sometimes, but there’s nothing there that can’t be overcome with a heart open to love. When Christensen directly contrasts a scene of overcooked uncle/niece tenderness with a Jheri-curled Ron Perlman unironically intoning, “You know, the wonderful thing about you, Richie, is that death isn’t a destination for you. It’s part of you. It lives in you. It’s woven into the fabric of your soul. There’s nothing you can do but embrace the fact that every day of your life oughta be your last,” the juxtaposition goes beyond unsubtle. It rubs viewers’ noses in an unearned sweetness that couldn’t be more out-of-place in the bars and back alleys of after-hours Manhattan.

Before I Disappear almost has enough items in the pro column to render its tonal inconsistencies irrelevant. Christensen is still getting his directorial sea legs, but he’s found a serious talent in cinematographer Daniel Katz. Katz’s camera makes the borough’s dingiest locales thrum with nocturnal beauty; it won’t be long before a higher-profile director taps his keen eye for powerful urban imagery. Rossum wrings every modicum of feeling from her slight role, decades of repressed animosity spilling forth in each of her rage-choked words. Even the relatively green Ptacek makes the most of an opportunity to dig a little bit deeper than her current gig as the voice of Dora The Explorer normally permits. (Except for the episode where Dora had to get Boots off heroin. Harrowing stuff.)

But for a debut film from a writer-director-star, Before I Disappear owes too many of its moments of greatness to other people; a slow-mo walk through a costume party wouldn’t be half as arresting without David Bowie wailing on the soundtrack and Katz’s jaw-dropping camerawork. Christensen already has the hard part down; if anything is clear, it’s that he has no fear about pouring all of himself into the conception and execution of his work. With so much skin in the game, it’s now a simple matter of cutting just enough to show viewers the blood pumping through his veins. Before I Disappear goes too far, and bleeds out.