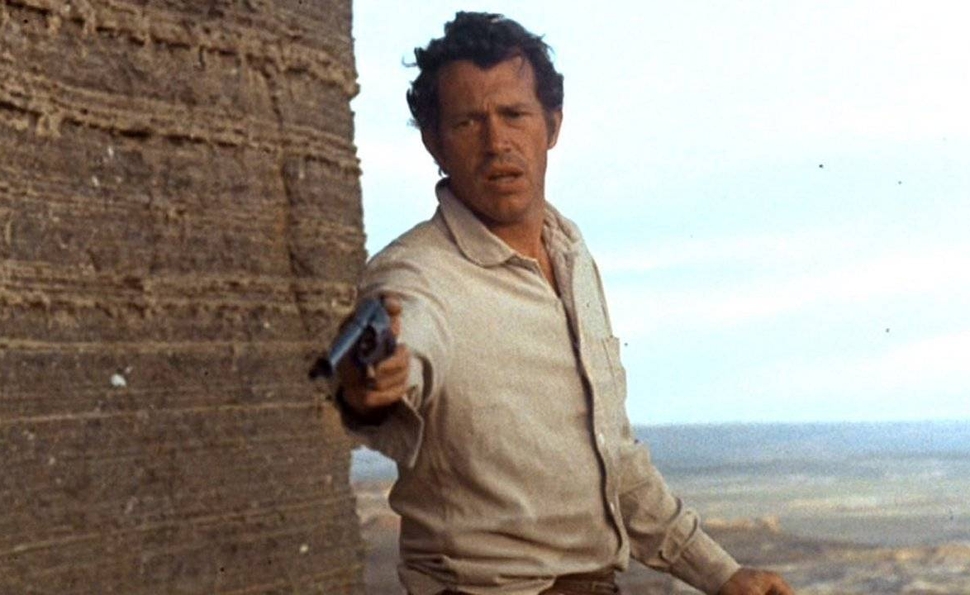 The Shooting / Ride In The Whirlwind

In the 1960s and 1970s, producer Roger Corman attracted talented young filmmakers with a simple promise: If they were willing to make commercial pictures, and could stay within his minuscule budgets, they’d gain hands-on experience and might even be able to experiment a little. Few directors took as much advantage of the Corman system as Monte Hellman did in the spring of 1965, when Corman gave Hellman and actor Jack Nicholson $150,000 to go out into the Utah desert and make two Westerns back-to-back. Hellman emerged from the wilderness with The Shooting and Ride In The Whirlwind, a couple of spare, elliptical chase pictures that arrived at the start of what would become a whole wave of existential art-Westerns. The films played at Cannes, won raves from the New Wave crowd, and were both sizable hits in France—though in the U.S., they were sold into a package of films for television, and never had a theatrical release.

Ride In The Whirlwind, written by Nicholson, is the more conventional of the two. Nicholson plays Wes, one of a trio of itinerant drovers who make the mistake of camping out in a canyon by the shack of Blind Dick (played by Harry Dean Stanton), the ringleader of a band of outlaws. When a vigilante posse shows up to clean out the nest, Wes and his bunch get caught up in the sweep, and have to take refuge with a family of nearby farmers who are no more convinced than the posse that Wes is innocent. In The Shooting, meanwhile, Warren Oates plays a miner and former tracker named Willett Gashade, who gets hired by a brusque, unnamed woman (Millie Perkins) to be her guide and protector. The further they ride into the wilderness, the clearer it becomes that The Woman may have some nefarious reason for engaging Gashade, and that it may involve the steely gunslinger Billy Spear (Nicholson), who’s been following them.

The Shooting’s script is credited to “Adrien Joyce,” a pseudonym for Carole Eastman, a former actress who a few years later went on to co-write the Oscar-nominated script for Five Easy Pieces with director Bob Rafelson. Like Five Easy Pieces, The Shooting has a mysterious quality, as though key information about the characters and the situation is missing. Some of that is due to Hellman, who says he ditched the first 10 pages of Eastman’s script because he generally prefers to cut to the chase, so to speak. But The Shooting as a whole is so sketchy that it almost demands to be read as allegory, or myth. It’s the archetypal tale of “The Woman” and “The Killer” leading “The Haunted Man” deep into the desolate American frontier, far from civilization.

Though Ride In The Whirlwind is more straightforward, it isn’t a much more complex narrative. Again, Hellman gets right to the point: The posse shows up early, driving Wes to scramble up the box-canyon and find shelter. From there, the movie settles into a tense hostage drama, as Wes and his friend Vern (Cameron Mitchell) try to persuade the farm family’s sweet, impressionable daughter Abigail (played by Perkins) that they aren’t criminals. There’s a pervasive feeling of hopelessness to Ride In The Whirlwind that points the way to later gloomy counterculture favorites like Bonnie And Clyde, Easy Rider, and The Wild Bunch. This isn’t a situation where justice is an option. Out in the middle of nowhere, 20 men with guns decide who deserves to live.

Hellman makes a virtue of necessity with both of these films. With little money for sets and extras (and with Nicholson reportedly applying pressure to keep costs down so they wouldn’t owe Corman for any overages), Hellman made both movies about isolation and emptiness. Hellman doesn’t overemphasize the beauty of the West—or the muck, for that matter. Instead, there’s a documentary-like simplicity to the imagery in these films, and a fascination with realistic detail in the way Hellman drops in insert shots of horses’ legs and cowboys’ tired feet. Both The Shooting and Ride In The Whirlwind are highly conscious of proximity, with camera angles that show how physically close everyone is indoors, and how they’re dwarfed by the landscape outside. Ride In The Whirlwind also uses sound design to clarify exactly where everybody is, as Wes and Vern keep hearing the shootout with Blind Dick in the background for minutes while they’re climbing away, and later are driven to distraction by the incessant thunk of Abigail’s father’s axe outside their hideout.

Overall though, Ride In The Whirlwind isn’t as visually inventive or thematically resonant as The Shooting, which is easily one of the best movies Corman ever backed. From the muted, soulful performances by Oates (who became one of Hellman’s most important collaborators over the next decade) and Will Hutchins (playing Gashade’s dangerously naive cohort, Coley) to the way Hellman keeps finding unusual places to set and to move the camera, The Shooting keeps making the Western genre feel new, as though it had no conventions. In one of the film’s best shots, Coley describes to Gashade how their mutual friend was killed, and Hellman shows the death from Coley’s point of view, peering nervously through a tent-flap. That camera setup didn’t cost Hellman any more than a straightforward one would have. It was money shrewdly spent.

Criterion is packaging The Shooting and Ride The Whirlwind together on a single Blu-ray (or on two DVDs in a single package), with a set of extras enhanced by Hellman’s direct involvement. Hellman interviews Corman, Perkins, and Stanton (among others), and he joins a commentary track with scholars Bill Krohn and Blake Lucas. The personal touch throughout is welcome, as Hellman swaps anecdotes with his old cast and crew about the rough conditions on the set in Utah, and as he listens to Krohn and Lucas theorize about his movies, then tells them where they’re wrong. Nicholson’s total absence from the bonus features is a letdown—and the best extra here, a passionate appreciation of Oates by critic Kim Morgan, has no Hellman at all. But for the most part, Hellman’s hands-on approach to this set fits with two movies that bear his personal stamp.