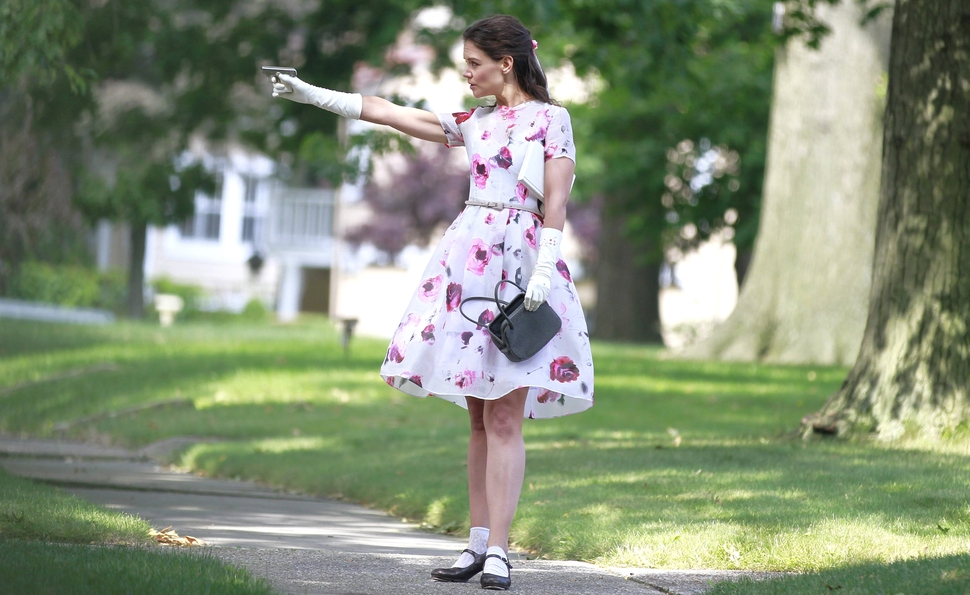 Just before Halloween 2014, an organization dedicated to ending street harassment posted a video compiling the many come-ons, catcalls, and other uninvited attention a woman collected from men simply by walking through the streets of New York for a day. The video has racked up more than 35 million views, and sparked a seemingly endless flood of tirades, thinkpieces, and parodies, all centered on what constitues harassment, what catcalling is really about, and what kind of expectations of privacy or solitude women are allowed to have in public spaces. Karen Leigh Hopkins’ timely black comedy Miss Meadows has its own take both on the hidden ugliness of catcalling and on how to respond, and it cuts straight to the point in its opening scene: Primly dressed schoolteacher Miss Mary Meadows (Katie Holmes) strolls through a bright suburb, and a man driving by tries to start a casual hey-baby flirtation. Almost immediately, his banter decays from compliments to crudity to an attempt to kidnap her at gunpoint. And then she pulls out a pistol, kills him, and strolls away, tap-dancing as she goes.

That opening lays out the gap between Miss Meadows’ baby-faced-naïf appearance and her enthusiasm for vigilante murder, and it establishes the film’s surreal sense of humor: Her tap-dance interludes and the CGI deer and bluebirds in the background position her as a real-world Disney princess, as out of place in a world of sexual harassment and stranger-rape as Amy Adams’ character in Enchanted, or the Bradys in The Brady Bunch Movie. But at the same time, the opening exposes the film’s biggest problem: It really does believe Miss Meadows’ perkily delivered refrain that the world is a cesspool of filth and misery. It’s the kind of place where every case of street harassment ends at gunpoint, criminals lurk in waiting on every corner, and women are right to expect threats and answer with murder.

It’s never entirely clear how seriously Hopkins wants viewers to take this poisonous worldview, though she tips her hand by setting her story in a Blue Velvet-style small town full of bright gardens and hidden savagery. When Miss Meadows isn’t killing people, Holmes plays her as a childlike chirp-bot who speaks in cutesy aphorisms and quaint little rhymes, and uses punishing literalism to keep people at bay. (When a kindly but cynical neighbor played by Mary Kay Place tries to set her up with a nice single dentist and warns that she shouldn’t “be an old maid,” Miss Meadows answers, with no apparent sarcasm, “That’s impossible. I don’t clean houses for a living, and I have no intentions to start domestication training.”) Later, a cop describes her as a “Pulp Fiction Mary Poppins,” and there’s a truth to that beyond the Julie Andrews sweetness: Like Mary Poppins, she puts people in their place with a smile and some remarkably kind acidity.

Holmes’ performance helps Miss Meadows considerably: It’s so relentlessly upbeat and deliberately artificial that it admits no cynicism or judgment, and it makes the film daringly weird, like a less-bloody but no less savage version of Lucky McKee’s May, with less mutilation and more tea parties. The problem is everything around Holmes. Hopkins delivers some beautifully precise sequences, but they never entirely fit together. One of the best comes in a scene dripping with menace, as Miss Meadows delivers tea, scones, and death threats to a neighbor recently released from prison for felony child abuse, to the tune of a children’s song with insinuating whispered lyrics. But that sequence is hard to square with the attempt at a nice romantic subplot involving small-town Sheriff Mike (James Badge Dale), or the melodramatic slo-mo flashbacks explaining Miss Meadows’ banally obvious origins. Some of the material would fit fine in a film meant to be taken at face value; some of it is the stuff of nightmare, and there’s no attempt to reconcile the hard cuts between the two.

In many ways, Miss Meadows recalls 2010’s hilariously awful Jessica Alba vehicle An Invisible Sign, which similarly puts a perky, naïve substitute teacher into a world she’s ill-equipped to handle, then tries to build a rom-com around her. (Much as with An Invisible Sign, one of Miss Meadows’ biggest barriers is the problem of a grown man attracted to a woman who behaves like a prissy 5-year-old at a fancy birthday party.) But Miss Meadows is much more aware of its own playfulness, which is more arch than the St. Louis waterfront. Its best moments suggest a much better film that looks at how Miss Meadows’ apparent mental illness and trauma integrate with the world around her, instead of positioning her as a neat, polite, probably necessary corrective to a world where every wolf whistle is immediately followed by a rape threat. Miss Meadows is drawn in the bright artificial colors of a circus lollipop, and those colors are often dazzling. But there’s a little too much medicine here for a spoonful of sugar to fully wash down.