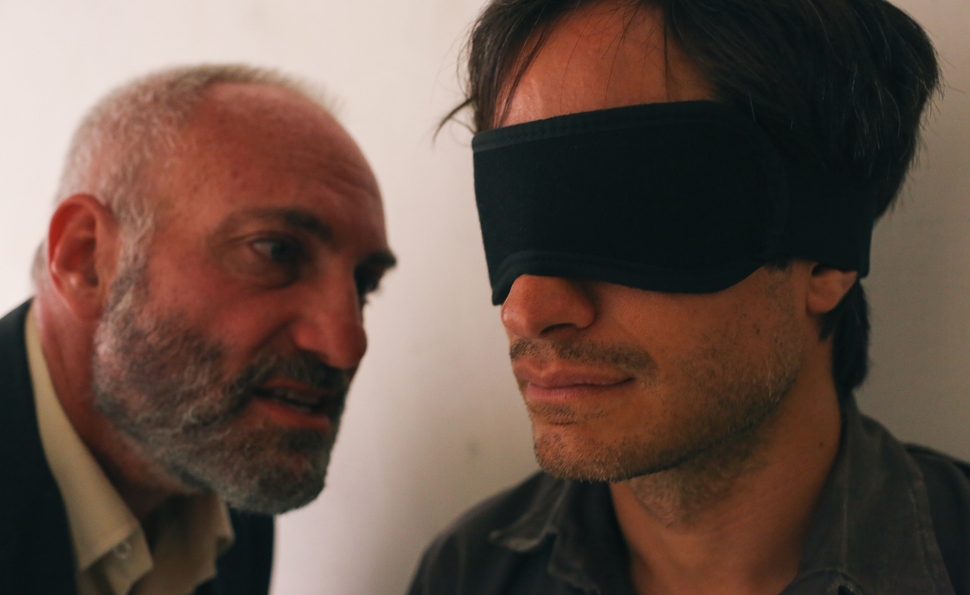 In many ways, Rosewater comes across as a standard story of modern political oppression and the triumph of the human spirit: Adapting Maziar Bahari’s 2011 memoir Then They Came For Me: A Family’s Story Of Love, Captivity, And Survival, the film follows Newsweek reporter Bahari as he leaves his pregnant wife Paola and returns to his native Iran for a short trip to cover the tumultuous 2009 elections. When accusations of massive fraud sparked a widespread protest movement, with millions of people participating in demonstrations, Bahari was arrested as a foreign spy. He spent nearly four months in prison, often in complete isolation, being interrogated, beaten, and subjected to unrelenting psychological abuse by a man he dubbed “Rosewater,” after his perfume. The film is never graphic in portraying his ordeal, but it’s grueling, as Rosewater terrorizes his victim, always implying that worse treatment is on the way, from torture to death. Bullied to admit to all sorts of untruths, and point fingers at other innocents in the process, Bahari tries to honor his family—and navigate a dangerous and irrational situation—by acting compliant without betraying the truth, his beliefs, or other people who stand to suffer if he trades his captivity for theirs.

And then something nearly miraculous happens: The film starts finding the humor in his situation, and in his approach to it. Rather than just becoming uplifting, it takes advantage of all the ugly tension to create something cathartic and hilarious. In the process, Rosewater answers a basic question: Why did The Daily Show’s Jon Stewart choose a memoir about Iranian political repression as the material for his theatrical writing and directing debut? The answer, apparently, is because he found a way to fit the material to his sensibility. Like The Daily Show, Rosewater makes uncomfortable political realities into wry but uproarious jokes.

There’s a closer association between the show and the film, though: Shortly before Bahari was arrested, he appeared on a Daily Show interview segment featuring correspondent Jason Jones playing an inept, uninformed American spy infiltrating Iran. Rosewater grills Bahari closely about his appearance on American TV and shameless association with a spy, twisting his mild, toothless political statements into heresy and treason. It’s just one of many instances where Bahari’s situation becomes terrifying and ridiculous at the same time, as he struggles to understand whether his captors are idiots who don’t understand fiction or satire, or are cleverly manipulating him by placing him in a situation of such insane, humorless intolerance that he knows he’ll be unfairly found guilty of something, so he might as well confess in hopes of better treatment. It’s a form of black humor Stewart trades in all the time: In this poisonous environment, laughter is a better outlet than rage or insanity.

Gael García Bernal plays Bahari as a meek, easygoing man who’s well aware of the danger in speaking up against political corruption or civil unrest in Iran: When he meets students who proudly show him the satellite-dish farm they use to get uncensored broadcasts from the outside world, he nervously turns his camera away, and he hesitates when they want to identify themselves and openly state their political beliefs to the lens. Even caught in the middle of the riots following the election, he hesitates to capture footage, until the young man who’s been driving him around town (Dimitri Leonidas) bitterly derides him for having a real weapon, and refusing to use it. Bahari is similarly meek in interrogation: The film’s biggest failing may be in significantly downplaying the physical abuse the real Bahari endured, and holding so closely to his experience that it doesn’t touch on the real danger that explains his fearful servility. At times, Bernal’s fear reactions seem overplayed, even cowardly, because he’s so quick to flinch from violence he hasn’t been offered. The interpretation gives Bahari room to grow emotionally and find his confidence, but it still seems excessive as the film is framed.

Stewart makes many stylistically flashy first-time-director choices in bringing Rosewater to the screen: When Bahari thinks about Western media, transparent images from prominent films take over the walls behind him, and as anger over election fraud spreads, Stewart overlays Tehran with animation representing the way social media helps spread the Green Movement. But the combat on the street is handled viscerally and with admirable control, and as Bahari’s situation worsens, Stewart’s direction becomes progressively more spare and personal. His script underplays Rosewater’s sadism and stupidity: Pusher star Kim Bodnia plays him as an unsophisticated man with obvious weaknesses and fixations, but lets audiences sympathize with the pressure he’s under to produce results and prop up the regime, and with his frustration and helplessness in the face of an obdurately changing country. Rosewater often comes down to a two-man face-off symbolizing a war for Iran’s future, and whether it will be composed of paranoid, invented falsehoods, or a more equitable and gentler reality.

Rosewater only obliquely takes a stand about the 2009 elections and their outcome: Its real stand is against government repression and control, and the kind of regressive environment that would encourage behavior like Rosewater’s, and find it necessary, or persuasive. But once it starts to mock him, it becomes more dark comedy than political drama. There’s a powerful emotional connection at its center, with Bahari and his interrogator locked into a ridiculous situation with each other. Laughing at the horror is a natural reaction for Stewart. It’s also a tremendously effective one here.