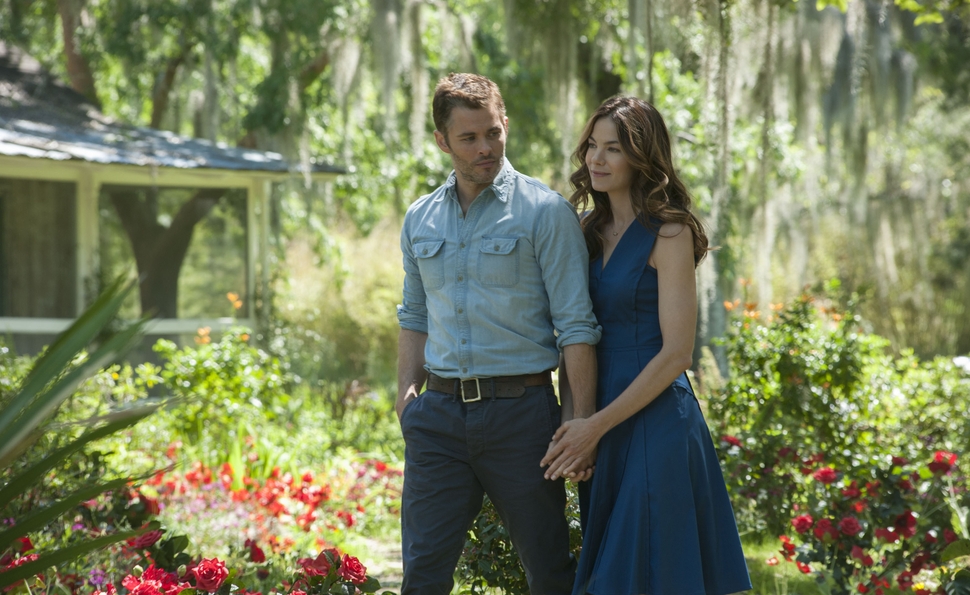 The Best Of Me

As Amanda Collier and Dawson Cole, the Bayou sweethearts at the center of the Nicholas Sparks adaptation The Best Of Me, Michelle Monaghan and James Marsden are gorgeous and sincere, and it’s easy to believe they share a chemistry that hasn’t dissipated over 20 years apart. As the teenage versions of Amanda and Dawson, Liana Liberato and Luke Bracey are also gorgeous and sincere, and it’s easy to believe their love could stand the test of time. Put aside all the tackiness that goes along with a Sparks production—the bliss of sunsets and tulips, talk of destiny and serendipity, willows that do quite a bit of weeping—and there’s no reason why the simple interplay between past and present shouldn’t be affecting. After all, the hard work of finding a couple (two sets of the same couple, no less) worth caring about is half the battle.

The Best Of Me loses the other half of the battle, however, and it’s a case study on how the quality of screen partners is only as good as the quality of the romantic obstacles separating them. Sparks is known for his big melodramatic twists, and he’s planted a few doozies here, but until the third act goes completely haywire, the film’s determination to keep the audience from even seeing the obstacle is itself an irritating obstacle. (The specifics on that, and so much more, can be found in The Reveal below.)

Before then, we start with Amanda and Dawson as adults. Amanda is married to the sort of rich, callous, irritable pencil-neck (Sebastian Arcelus) who’s attached to his phone and more concerned with making tee times than spending a second with his wife. She’s mother to two children, a boy who’s getting ready for college and a girl who died of leukemia, which is the kid’s fault for living in Sparksville, U.S.A. Dawson works on an offshore oil rig and didn’t find another mate after Amanda, though his passion for physics and looking totally cut never faded. After 21 years apart, the two go back to their hometown to pay their respects to Tuck (Gerard McRaney, a.k.a. TV’s Major Dad), who sheltered Dawson from his abusive drug-dealing father (Sean Bridgers), and whose will sets the stage for a steamy reunion.

The Best Of Me cuts back and forth between the adult Amanda and Dawson and their mid-1990s teenage selves, who fall in love despite their class differences. The past-and-present dynamic is reminiscent of The Notebook, Sparks’ biggest screen hit, but the film has the advantage of the older couple still having active romantic potential. As late-30s Amanda and Dawson and late-teens Amanda and Dawson both go moony for each other, the question of what, exactly, tore their precious love apart becomes a tease the film is in no hurry to answer. Then once it does answer the question—ludicrously—and that terrible obstacle between them can finally be acknowledged and hurdled, it still has half an hour left to go, and another twist up its sleeve.

Hollywood desperately needs more straightforward, earnest, diverting romantic melodramas, but it’s a shame Sparks has cornered the market on them. His films are trite, formulaic, and often absurdly contrived, but their glossy purity burns even more. Dawson has scars from his father’s beatings all over his (breathtaking) torso, but The Best Of Me, like all Sparks’ work, would rather kill his characters and leave a beautiful corpse than have them continue a real, scarred relationship. For him, the good is always the enemy of the perfect.

GoWatchIt: Buy. Rent. Stream The Best Of Me