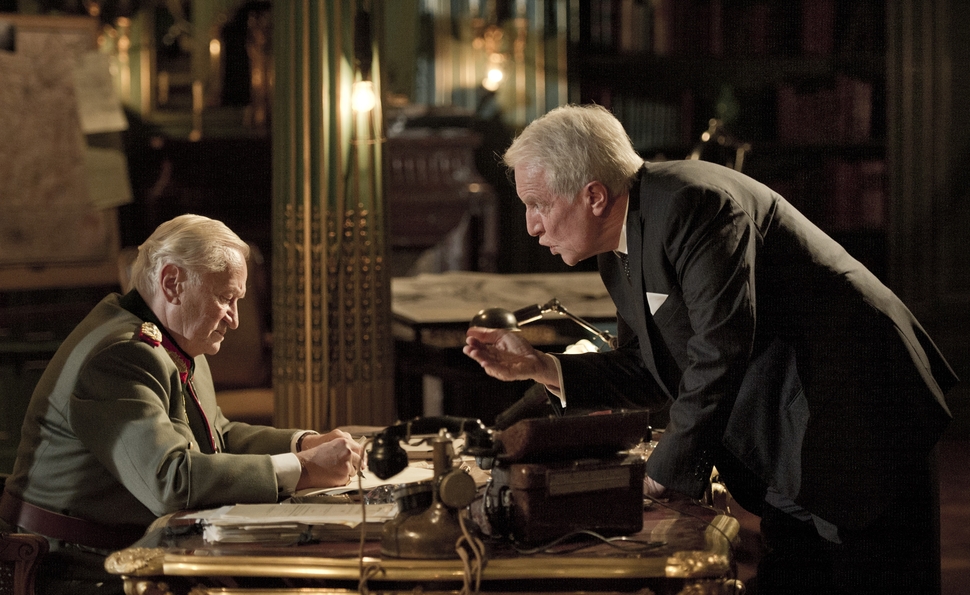 The opening credits of Diplomacy, Volker Schlöndorff’s adaptation of Cyril Gély’s play, neatly illustrate the pitfalls of adapting theater for film, though not in the usual way. Schlöndorff puts the credits over devastating footage of Warsaw after the Nazis razed it, building after building completely leveled. On the soundtrack, Wilhelm Furtwängler conducts the Berlin Philharmonic in a 1943 performance of the Allegretto from Beethoven’s Seventh Symphony. It’s a purely cinematic juxtaposition that says a lot about the Germanic relationship between high culture and barbarity without explicitly saying anything at all. But plays, especially when they’re removed from the theater, tend to say too much, and that’s the problem with most of the rest of Diplomacy.

The film is set in the early morning of August 24, 1944, as American troops approach Occupied Paris. The German military governor of the city, Dietrich von Choltitz (Niels Arestrup), is in his suite at the Hôtel Meurice making final preparations to implement Hitler’s plan to destroy the city. The plan is a devastating one: By demolishing all of the bridges except the Pont Neuf, the Nazis hope that the Seine will burst its banks as the debris forms dams, causing massive flooding and presenting the Allies with a humanitarian crisis to slow their advance into Germany. It isn’t just tactics, however: After the bridges go, a second round of charges will make landmarks around the city crumble; the Louvre, the Opera, Notre Dame, and the Eiffel Tower, lost to the world, entirely out of spite. At the last minute, Swedish Consul Raoul Nordling (André Dussollier) arrives unannounced—through a previously undiscovered secret passage, no less—and as the morning unfolds, attempts to convince von Choltitz to disobey Hitler and spare the city. It’s a verbal duel between two men in a single room—perfect fodder for theater, but not necessarily for a film.

And yet oddly, Diplomacy is at its worst when Schlöndorff consciously attempts to open the play up. There are scenes of Nazis arriving at the hotel that serve no purpose except to provide an opportunity to cut to an exterior shot. There’s one great joke in a cutaway—the detonators for blasting the postcard attractions of Paris have been labeled by clothespinning actual postcards to the wires—but for the most part, any time the camera leaves that claustrophobic suite, it’s a distraction. The real action—and the real cinematic possibilities—turn out to all be interior. Schlöndorff does the expected thing with handheld cameras, slowly circling the combatants, but he also finds interesting and exciting ways to use the space—a column in the room slices shots in half, the suite’s mirrors are positioned carefully to frame functionaries milling in the background. Schlöndorff and director of photography Michel Amathieu color grade the image so that the grey Wehrmacht uniforms fade into the suite’s walls, and light their actors so that their faces loom out of darkness like wraiths. Even the blocking is masterful in an unobtrusive way, as the actors and camera move in a single shot from closeup to two shot, to reverse, to a deep-focus shot of both men at opposite ends of the room—fluidly moving from one classical composition to the next without cutting away.

The problem is that the duel isn’t as good as the pyrotechnics. The outcome is preordained—Paris is still around, after all—so Gély and Schlöndorff have to find drama in the details. Some of those details are very good: Nordling makes the appalling—but diplomatically smart—suggestion that saving Paris will be enough to prevent Germany from becoming “an outcast” after the war; when Himmler’s lackeys show up to steal art, von Choltitz reacts snobbishly not to the theft, but to the pieces Himmler wants. And although the film’s final section is its weakest—a dull gunfight through the Paris underground fought by minor characters is a particular low point—the ending is simultaneously unexpected and absolutely correct. But there are too many of the kinds of speeches that only barely work on stage, from a labored discussion of Abraham and Isaac to speech after speech about the greatness of Paris. None of it is as convincing as the final shot: the camera gliding along the Seine taking in the modern-day city. Nobody has to say a word.