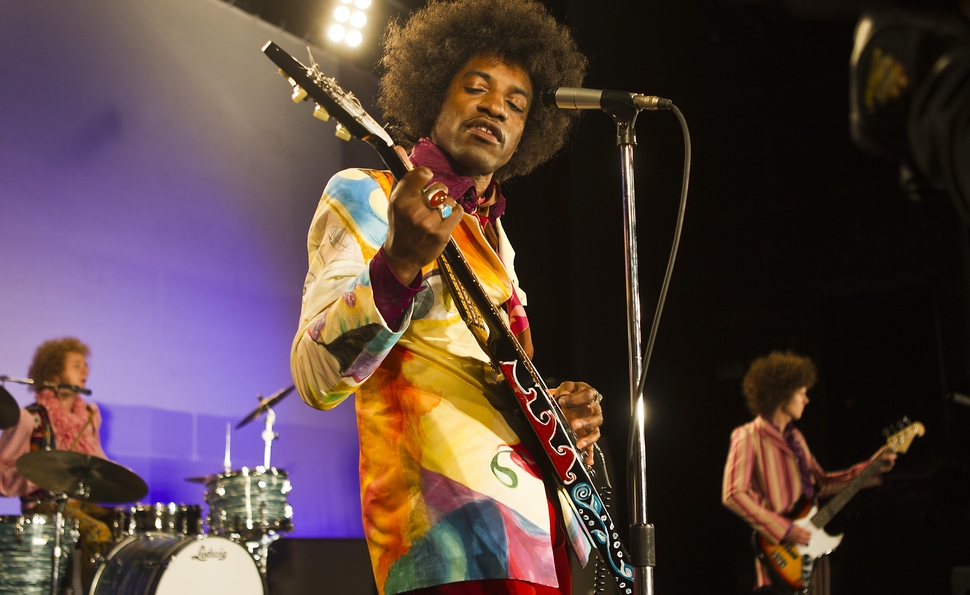 Jimi: All Is By My Side

If nothing else, Jimi: All Is By My Side is convincing proof that the world would be better if every biopic were made without the endorsement of its subjects or their estates. Denied the rights to Jimi Hendrix’s songs and recordings, 12 Years A Slave/Undercover Brother screenwriter John Ridley had no choice but to limit his approach to the iconic musician. Rather than making a traditional biopic—tracing Hendrix’s life from his Seattle childhood to his sudden death in London at age 27 (finishing with a title card before the end credits about how his picture is on the dorm wall of every college R.A. in America)—Ridley was legally compelled to try a different tack. The linear slipstream of a film that resulted from his efforts is severely problematic and somewhat purposeless, but by narrowing his focus to the year Hendrix spent in London prior to his star-making performance at the Monterey Pop Festival in 1967, Ridley is forced into an anti-drama that feels emotionally honest even when it’s spinning fictions. Awful, libelous fictions.

Ridley isn’t a first-time director—he was behind the camera for a 1997 David Caruso/Stacey Dash thriller called Cold Around The Heart—but All Is By My Side plays very much like a first film. From the opening scenes, Ridley shows a hostility toward traditional film grammar that borders on contempt. Palpably desperate to accentuate his movie’s unorthodox relationship to its subject, Ridley deploys an erratic variety of tricks to kink up an origin story that’s most remarkable for what happened afterward. When Hendrix is introduced as a backing guitar player at New York’s (empty) Cheetah Club, the camera is shaking so violently, it’s hard to notice that he’s the only black man in the band. During Hendrix’s first conversation with Linda Keith (Imogen Poots, never better), a 20-year-old Brit with an eye for talent and a growing frustration at only being thought of as Keith Richards’ girlfriend, the sound is deliberately mismatched with the image. Archival news broadcasts, silences, and even baby pictures are later inserted into the movie, hoping to imply the things Ridley isn’t allowed to show.

These flourishes seem especially needless and desperate because All Is By My Side is graced with such a present, lived-in lead performance. André Benjamin completely disappears into the role. The OutKast co-frontman is currently 12 years older than Hendrix was at the time of his death, but the mismatch never rubs; few people on earth look so comfortable with a guitar in their hands. Benjamin bears an uncanny resemblance to Hendrix, but he never settles for mimicry. Taking his cues from the unformed characterization of Ridley’s script, Benjamin inhabits the legendary guitarist with a simplicity that undercuts Hendrix’s potentially suffocating importance. Blissed out in a way that borders on naïveté, Benjamin’s Hendrix is never onstage without a smile. He knows he can play, but it comes so naturally to him that Linda has to convince him his talent is special. This isn’t the story of a rock god, it’s the portrait of a guy who can’t even begin to conceive of himself as a legend, because everyone else so insistently sees him as a curiosity. (One of the film’s most interesting digressions focuses on how Hendrix was conscripted into a race war that he was keen to ignore.)

Nevertheless, All Is By My Side ultimately becomes the rare biopic that missteps most when it tries not to sanctify its subject. As the film chronicles Hendrix’s delicately platonic relationship with Linda, the transatlantic move she spurs him to make, and the rough-and-tumble process of assembling the band that became The Jimi Hendrix Experience, the film is happy to keep its subject in the passenger seat. Hendrix is a cool cat, a guy who lives to jam, but as he gets more involved with his groupie girlfriend Kathy Etchingham (Hayley Atwell), he’s provoked to action in a way that threatens to completely undo the veneer of honesty Benjamin’s performance affords the film. The first problem with the scene in which Hendrix repeatedly bashes Etchingham’s head with a pay-phone receiver is that it never happened. According to Etchingham herself, the attack is a complete fiction. Crucially, however, the attack feels like a complete fiction within the context of the film. Nothing about Benjamin’s performance, nor the other moments in which Ridley locates it, convincingly suggests that Hendrix would hit someone (let alone a woman), with such violent intent.

Was Ridley so desperate to squeeze a rise-and-fall trajectory into this story of an ascending American legend that he turned Jimi Hendrix into a domestic abuser?  Regardless, it’s one of many things in the film that distract from its core. At heart, this is—or should have been—a look at how much love is lost in history. Despite being kept to the periphery for most of the movie’s middle, Poots exerts such a strong presence that her undefined relationship with Hendrix feels in play until the very end. But tectonic plates are shifting. Monterey and immortality are calling Jimi’s name, and otherwise-simple connections ultimately become human sacrifices for that process. So many stories about great artists are told above the ruins of collateral love, and Jimi and Linda began sacrificing each other as soon as they met. All Is By My Side ends just as Hendrix is coming into his glory, but Ridley’s film—a remarkable showcase for Benjamin’s acting talent, and a terrible application of what Werner Herzog called “ecstatic truth”—is in the end a tragedy.

GoWatchIt: Buy. Rent. Stream Jimi: All Is By My Side