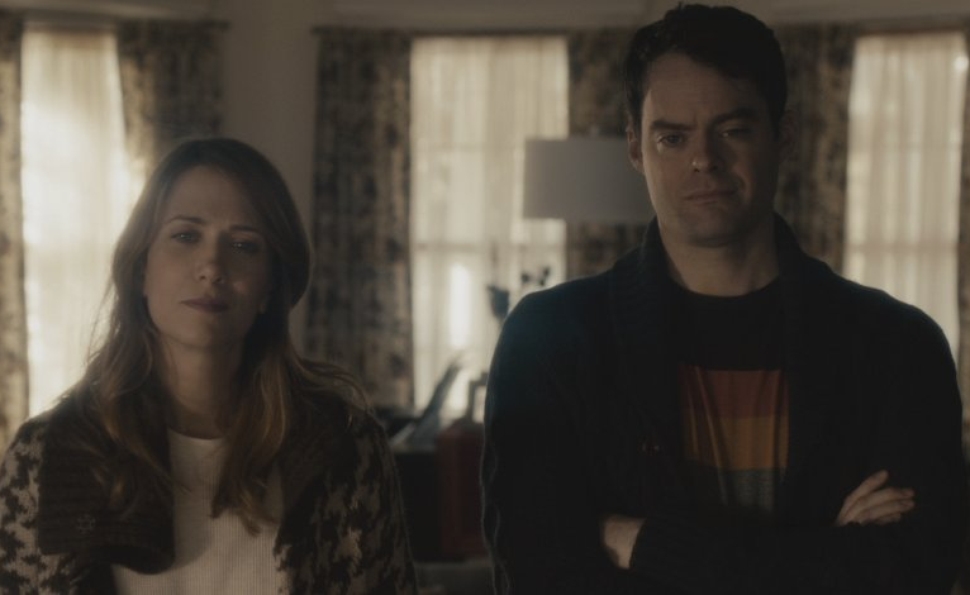 Blame it on The Graduate: Ever since Dustin Hoffman’s Benjamin Braddock stared soulfully in a series of watery tableaus back in 1967, water imagery has become lazy visual shorthand for alienation and displacement. Water is to painfully earnest dramas what chess is to movies in which two people square off against each other in a methodical war of guile and gamesmanship. So it isn’t an encouraging sign that The Skeleton Twins, starring former Saturday Night Live castmates Kristen Wiig and Bill Hader, trots out the moody water imagery early, and returns to it often. Scuba classes, bathtub suicide attempts, fish in aquariums and in sad little fragile plastic bags: The film keeps finding new narrative reasons for water imagery, and that imagery always feels exhausted, much like the film itself.

In an impressive dramatic performance, Bill Hader stars as Milo, an actor who attempts suicide by slitting his wrists after the latest in a series of disastrous romantic entanglements ends. His deep depression seems to have lasted his entire life, and that, plus his dysfunctional family, overwhelms him. Milo’s unsuccessful attempt puts him back in the orbit of his estranged sister Maggie (Wiig), who is nearly as suicidal as her brother. But she does a slightly better job of hiding it, at least from Lance (Luke Wilson), her puppy dog of a husband. Lance loves her unconditionally, but doesn’t understand her, and can’t penetrate her wall of sadness.

Maggie passive-aggressively channels her dissatisfaction with her conventional life into a series of doomed flings with adult-education instructors, most notably an Australian scuba instructor so sexy, he can actually pull off having a neck tattoo. Milo, meanwhile, attempts to cover his wrenching despair with an extensive string of sarcastic, deadpan, self-deprecating one-liners that only highlight his desperation. Back in his old hometown, Milo falls into the familiar patterns of his adolescence, alternately bickering and bonding with Maggie and picking up a doomed relationship with Rich (Ty Burrell), a closeted former English teacher who had an affair with Milo when he was only 15. The past spills out in ugly, unexpected ways as the depressives try to make sense of old traumas, most notably their father’s suicide, and figure out a path beyond their crushing ennui to a less-terrible future.

Perhaps because Wiig and Hader worked together on Saturday Night Live for so long, they have a chemistry that makes it easy to buy them as siblings with a long, complicated love-hate relationship—or even as variations on the same eternally suffering soul. As much with looks and body language as with dialogue, Hader and Wiig create the sense that they share a private world and language, one unknowable to outsiders. They also share a sad isolation from the rest of the world that’s both a strange comfort and a barrier against emotional growth.

The Skeleton Twins has a similarly keen feel for the emotional terrain of depression, but the film falls into a dour rut early on, and seldom rouses itself. There’s a highlight where Milo temporarily breaks out of his despair and lip-syncs to Starship’s “Nothing’s Gonna Stop Us Now” with such cheesy conviction that he gets his disapproving sister to join in, but it illustrates just how little levity there is in the film, and how infrequently it lets its stars be funny rather than bitterly droll. Director Craig Johnson manages some lovely, poetic images, but they’re outnumbered by familiar pseudo-poetic visuals from The Big Book Of Sundance Clichés. The Skeleton Twins has a pair of terrific, sharply etched lead performances, a polished, autumnal look, and some affecting moments where its protagonists bond. But to borrow a water-based metaphor from the film’s overflowing stock of them, The Skeleton Twins just lies there, cold and clammy, like a dead fish.