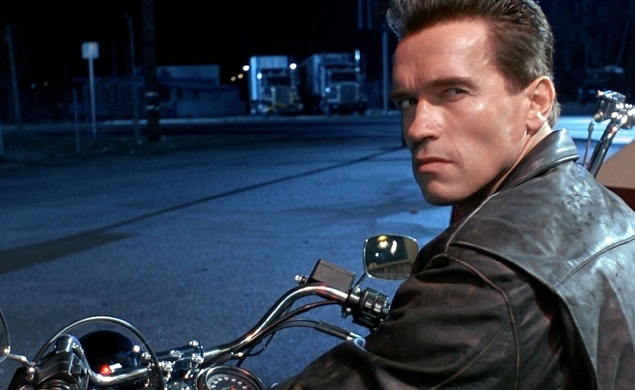 Screencrush’s Matt Singer writes his Arnold Schwarzenegger magnum opus:
“Arnold Schwarzenegger has you fooled. He’s convinced you he’s nothing more than a catchphrase generator. A bodybuilder, not a brainiac. A nostalgia act trapped in the past. But like the Terminator, whose fleshy exterior hides a heavily armored metal endoskeleton, there’s a lot more to Schwarzenegger than meets the eye. For 40 years, Arnold Schwarzenegger’s made a career out of defying naysayers and upending audience’s expectations. His first onscreen performance was so bad the film’s distributor redubbed his entire part — so he took acting and English lessons. Hollywood labeled him a meathead who was too big and bulky to play a leading man — so he fought for the leading role in Conan the Barbarian and turned it into a surprise hit. Critics pigeonholed him as a one-note bruiser — so he tried comedies and family films and became an even bigger star. (Adjusted for inflation, Twins would be the fourth highest grossing movie of 2015 so far.) Pundits laughed at his political ambitions — and a few years later he was the governor of California. Underestimate this man at your own peril.”

Rolling Stone’s Nick Schrager provides a brief history of people hating Seth MacFarlane:
“He was one of the youngest TV executive producers in the medium's history, created not one but two successful animated programs, hosted the Oscars and had a blockbuster comedy bring in beaucoup box office receipts. He has contributed $1 million to the Reading Rainbow kickstarter fund and produced the recent reboot of the classic science series Cosmos; Harvard named him their 2011 Humanist of the Year. Yet Seth MacFarlane has managed to inspire an intense, rabid hatred of his raunchy comedy and retro-dude attitudes that's been as fervent as the fanbase that brought the canceled Family Guy back to life. It's a sentiment that seemed to reach a fever pitch this past weekend with the poorly received release of Ted 2 — the sequel to his 2012 hit that's garnered its fair share of condemnation for a racial-allegory story about the titular profane teddy bear's attempts to be legally recognized as a person.”

Grantland’s Thomas Golianopoulos on De’aundre Bonds’ second chance with Dope:
“Amid the ’90s nostalgia in Dope—the coming-of-age tale set in Inglewood, California, that was released recently to enthusiastic reviews—one of the most unexpected throwbacks in the film is a cameo from the actor De’aundre Bonds, reprising his role of Stacey from the 1999 film The Wood. A lot has changed for the character. When he’s introduced in The Wood, which, like Dope, was cowritten and directed by Rick Famuyiwa, Stacey appears to be a conventional villain: a gang member — red baseball cap, matching belt — who pulverizes junior high school kids and commits armed robbery. There are layers to him, however. Stacey is a vulnerable, wayward kid. He’s also a caring big brother who follows a code of respect. Bonds is fantastic in the part, finding each emotion and nailing every scene. Stacey is now on the other side of the law as a high school security guard in Dope. Famuyiwa wrote him into the movie to connect both films. ‘I wanted to show that my new characters were living in the same world as The Wood,’ he told me in an email. Though Bonds is in only a few scenes, he was thrilled to revisit Stacey. ‘It was an honor to play that character again,’ the 39-year-old actor said over the phone last week. ‘He started off not so well in The Wood as a gang member. Hopefully everybody grows over time and tries to do something better with themselves. It was cool that he wasn’t the same type of person.’ It’s an arc that resonates with Bonds, who served nearly a decade in prison for a manslaughter conviction.”

Our beloved Kate Erbland has taken a full-time job as managing editor of Indiewire. We will miss her deeply and read everything she writes forever:
“ ‘Nigel [M. Smith]’s exit was made much more bearable when Kate accepted the position of managing editor,’ Dana Harris added. ‘She’s whipsmart and is an excellent writer and editor with a real flair for organization. I think she's going to do a great job.’ ”