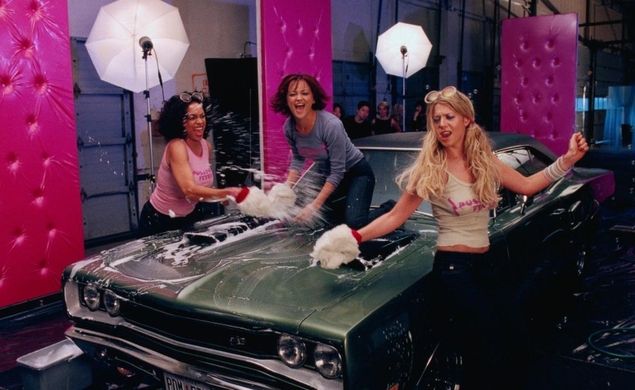 There are few movies that announce their release year as loudly as 2001’s Josie And The Pussycats; from the cast (Rachel Leigh Cook! Rosario Dawson! freakin’ Tara Reid!) to the emphasis-on-the-pop-punk music (co-penned by names like Adam Schlesinger, Adam Duritz, Jane Wiedlin, among others) to the TRL-centric milieu, everything about the musical comedy screams “pre-9/11 2001.” Because of that—not to mention it’s a live-action adaptation of one of Archie Comics’ mustier properties—it’s strange that Josie And The Pussycats has aged as well as it has. Though it was a box-office disappointment upon release, Harry Elfont and Deborah Kaplan co-production has amassed with each passing year more and more vocal fans who are shamelessly enamored of the script’s sly humor, relentlessly earwormy songs, and resplendent fashion. But it’s Elfont and Kaplan’s screenplay that deserves most of the credit, turning what could have easily been a proudly dumb, candy-colored cash-in into a proudly dumb, candy-colored satire of cashing in. Alan Cumming and Parkey Posey are at their comedically heightened best as a pair of scheming record-label shills who steer the Pussycats into an increasingly absurd mega-marketing conspiracy, and the film follows their lead in its hilariously overblown use of product placement. If you’ve yet to be brainwashed by the millennial delights of Josie And The Pussycats, put on your Josie Ears and tune in when it airs tonight at 8:45 p.m. Eastern on Encore Family.