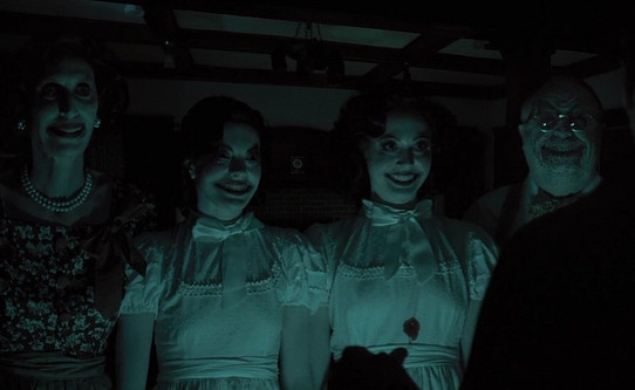 Over at Grantland,  Hazel Cills examines why James Wan and Leigh Whannell are masters of the horror film funhouse:
“In films like the Insidious series and another Wan film, The Conjuring, it’s almost as if Wan and Whannell couldn’t pick a monster to pin their films on, so they went with as many as they could dream up. And while these films certainly have their megavillains — faces you can tie a series to, like the Bride In Black and the witch Bathsheba — they are also stocked to the gills with so many minor creepy characters that they feel like a testing ground for who can scare the hardest. The Conjuring’s “Annabelle” doll was so effective in the film that she even earned her own spinoff. What this duo has excelled in is creating horror that is distinctly spatial and full of potential, allowing their films to turn into long-running franchises. The duo’s first megahit, Saw, which led to six sequels, was all about traps: mazes, bear claws, broken glass. And while the scares themselves were rooted in torture-porn challenges, the longevity of the series relied on how versatile this Saw space could be. Insidious carved an infinitely scary environment with the Further, even though two compelling villains led the movie. And The Conjuring was far beyond a typical haunted-house flick, resulting in a surprisingly good tangled mess of witches, demonic forces, exorcisms, and grounds plagued by numerous spirits. Not to mention that the film was based on the real-life paranormal investigators Ed and Lorraine Warren, a setup that has already given way to a Conjuring sequel.”

Little White Lies’ Sophie Monks Kaufman talks to Joshua Oppenheimer about the inherent risk in filming his follow-up to The Act Of Killing, The Look Of Silence:
“When I returned in 2012, Adi said to me, ‘Joshua, I need to meet the perpetrators. It's the only way I can see of lifting my family out of this trap of fear in which we find ourselves, in which my children are now inheriting, because if I can meet them, maybe we can talk, finally, about what happened and they'll find the courage when they see that I'm not coming for revenge to acknowledge that what they did was wrong and they will apologise and once they apologise we will be able to live together as human beings, as neighbours, instead of as killer and victim, afraid of each other.’ First when Adi proposed this, I said, 'Absolutely not, it's too dangerous. I've never seen a film where the survivor confronts a perpetrator while the perpetrator still has a monopoly on power, it's never been done before in the history of documentary film because it's too dangerous and it's certainly never happened in Indonesia.' But then when Adi explained why and explained to me how important this was to him, I asked myself, 'Is there some way that we might be able to do this safely?' I realised that because the men that Adi wanted to confront would think that I'm close to their highest-ranking commanders, they would have to think two or three times before ordering their thugs, who are always standing by ready to attack, to actually physically attack us because they wouldn't want to anger their superiors. I realised that maybe this very unique situation of having made The Act of Killing but not yet having released it yet would allow us to do this unprecedented thing of filming a survivor confronting a perpetrator while they're still in power.”

Forbes’ Monika Bartyzel on how Paul Feig and Melissa McCarthy built an empire defying Hollywood norms:
“Spy is a culmination of the characters Melissa McCarthy has built her fame on — characters who fight to be seen as more than their looks or weaknesses. As an agent metaphorically chained to a desk, Susan Cooper is the evolution of her characters in Tammy and Identity Thief, struggling to be seen as a person and not be defined by her looks or how she differs from those around her. As a spy, Susan temporarily closets her gentleness and takes on the fiercely unapologetic power that made Megan in Bridesmaids and Mullins in The Heat such successful and strong characters. Through them, she’s transformed step by step on-screen, exploring the way women react to and live within societal structures while easily proving her worth and prowess, and ultimately creating her desired version of herself. Like Cooper, McCarthy has the talents to be anyone — the nervously awkward, the brash and uncompromising, the stylishly confident, the gentle and motherly, or the armed and extremely dangerous. She is the superwoman and everywoman. She can be as slick as her counterparts, or be the relatable gateway to the audience — free of the cinematic magic that makes women on screen look like their were styled and dressed in the blink of an eye by invisible style pixies.”

Movie Mezzanine’s Brogan Morris on Montgomery Clift, the “original method actor”:
“Clift’s depleting reputation as one of the great and influential movie performers is down to a combination of factors. For one, his films that were so popular in his time are less so today. Classics A Place in the Sun and From Here to Eternity are to some extent Hays Code-products of their time, less in vogue now despite their intact artistic and socio-cultural merit, while Clift’s breakthrough project, The Search, is the kind of prestige weepie that might today be dismissed as ‘Oscar bait.’ (The fact that Clift never won an Oscar for The Search or for the three other films he was nominated for hasn’t helped in this regard, either.) Then there are the great films of Clift’s that simply don’t get the recognition they deserve. Terminal Station, written by Truman Capote, directed by Vittorio de Sica, and butchered by David O Selznick on release, deserves to be reappraised in its restored form. Other films have just fallen into obscurity, for one reason or another: Alfred Hitchcock’s whodunit I Confess, as thrilling as any of the director’s 1950s output; docudrama The Big Lift, which casts mostly non-performers against the backdrop of a bombed-out Berlin; and Elia Kazan’s gorgeously composed, sumptuously performed Wild River.”