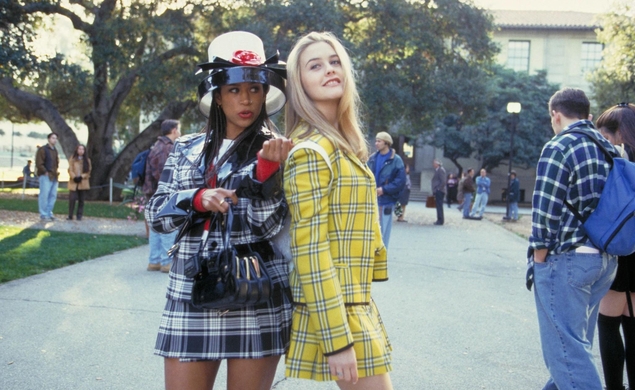 Over at Vanity Fair, our own Jen Chaney has the definitive oral history of how Clueless became an iconic ’90s classic:
“Carrie Frazier, Clueless casting director at Fox: I brought in Alicia Silverstone—I sent Amy a videotape of a young actress [who] I felt was really terrific.

Amy Heckerling: I was watching an Aerosmith video of ‘Cryin’.’ That was the first video she was in. And I just fell in love with her. Then my friend Carrie Frazier said, ‘You have to see this girl in The Crush.’ And I was like, ‘No, I want the Aerosmith girl.’ Well, it was the same girl.

Alicia Silverstone, Cher: I remember when I read the script the first time, thinking, Oh, she’s so materialistic—that I was judging [Cher] instead of being delighted by her. I remember thinking, This is so funny and I’m not funny. But once I was playing her—I just had so much fun being her. I loved how seriously she took everything. That’s essentially how I played it…. I felt like that was [who] Cher was. She was so sincere and so serious. And that’s what I think makes her so ridiculous and lovely all the time.”

The Guardian’s John Patterson on how Hollywood has evolved in the way it depicts death on screen:
“Time was, death was kept out of the movies, cancer was a stigma deriving from something bad in your karma and a culture of euphemism prevailed until surprisingly recently. If a character died of a terminal disease in movies from the 1930s to the 1970s, it was more often than not some sanitized, entirely symptomless ailment, one that left the body quite free of ravages, no buboes, no lesions, no vomiting blood into a bedpan, no adult diapers, no skeletal remnant, no gargling death rattle. In fact, in movies as diverse as Camille, Letter From an Unknown Woman and Dark Victory, one might have been forgiven for never realising what a protagonist was dying of. The only symptoms common to the deaths in these movies seem to be extreme soft-focus and an ethereally gentle and diffuse light around the deathbed. And this never really went away. Even as our familiarity with death increased, that soft lighting would glow on undimmed. We never even get a diagnosis for Ali McGraw’s Jenny in Love Story, though we can probably assume it’s leukemia, which destroys you from within, not without, so she too dies under the tender ministrations of the lighting department. Ditto Dying Young, in which Campbell Scott (leukemia) stays young and handsome to the bitter end, Charlize Theron (non-Hodgkin lymphoma) in Sweet November, and Winona Ryder (neuroblastoma) in Autumn in New York.”

Film School Rejects’  Landoln Palmer says there has never been a golden age of undistracted moviegoing:
“Last month at a centennial symposium on the life and work of Orson Welles, Welles historian Joseph McBride narrated a problematic theatrical experience that contributed to the unfortunate fate of the director’s The Magnificent Ambersons. At a Los Angeles test screening in 1941, a group of teenage boys reportedly laughed and jeered loudly throughout the film at Ambersons’s tragic “spinster” character, played by Agnes Moorehead, a distanced (not to mention sexist) collective reaction that undercut the character’s dramatic moments. Whether looking for an excuse to take the film away from Welles or scared into making changes by the awful test screening, this collective reaction against the grain of Andersons’s intent helped in some way to seal the film’s compromised rollout and its heavy recutting by RKO. However, McBride asserted, the screening cards told a much more complex story, and captured the revelatory experience that several audience members had watching the film. Perhaps at least one of the film’s early written words of praise even came from a mocking teenage boy. Regardless, the most vocal reaction to the film was, for what it’s worth, not indicative of the entire crowd’s experience.”

Vulture’s Kyle Buchanan explains where the sounds in Jurassic Park came from (hint: not real dinosaurs):
“ ‘If people knew where the sounds in Jurassic Park came from, it'd be rated R!’ laughed Gary Rydstrom. The sound designer rang me up last week to discuss his work on the Steven Spielberg action classic, newly rereleased in 3-D; when the movie came out in 1993, it netted him two Academy Awards for sound design and mixing (he's been nominated an astonishing 17 times over his career, winning seven statuettes). Though the Jurassic job was fun, Rydstrom remembers it as a tall order: He had to create dozens of distinct dinosaur noises essentially from scratch, since no one really knows what these long-dead animals would have sounded like. His solution was to spend months recording animal noises — some exotic, some not — then tweaking those homegrown sounds to create something otherworldly but still organic. What recognizable animals did he use to mix together the raptor, the T. rex, and all of Jurassic Park's other dinosaurs? Read on, if you dare: As Rydstrom implied, some of the sounds are sorta smutty.”