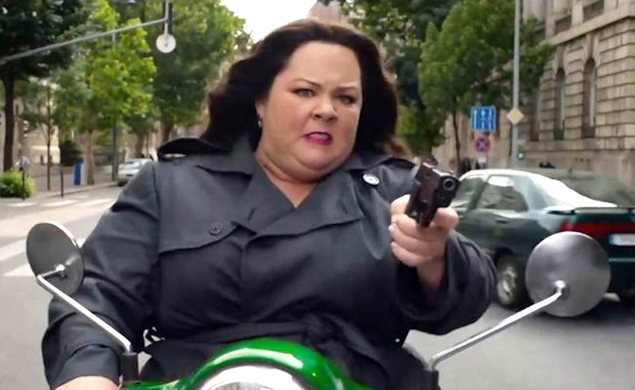 Grantland’s Kevin Lincoln on the enduring appeal of espionage parody movies:
“One of the first prominent spy parodies is also, oddly, a part of the genre’s greatest totem. Before any of the James Bond films were made, Charles K. Feldman had acquired the rights to the first Ian Fleming Bond novel, Casino Royale, and tried to make it with Eon Productions, the group that would subsequently produce all but one of the canon Bond movies. When Feldman failed to reach an agreement with Eon, he went ahead and made Casino Royale anyway, with David Niven in the role of 007 and legendary comic actor Peter Sellers and former Dr. No bombshell Ursula Andress in supporting parts. Rather than a traditional Bond movie, Casino Royale was a goof: This paragraph from the Wikipedia plot summary pretty much covers it.

‘Bond is promoted to the head of MI6. He learns that many British agents around the world have been eliminated by enemy spies because of their inability to resist sex. Bond is also told that the ‘sex maniac’ who was given the name of ‘James Bond’ when the original Bond retired has gone to work in television. He then orders that all remaining MI6 agents will be named “James Bond 007″, to confuse SMERSH. He also creates a rigorous programme to train male agents to ignore the charms of women. Moneypenny recruits “Coop”, a karate expert who begins training to resist seductive women: he also meets an exotic agent known as the Detainer.’

OK! The weirdest part of all this is that, because the movie was still loosely based on the novel, parts of it — Le Chiffre, Vesper Lynd, the casino itself — were reappropriated for the deadly serious 2006 version of the film, starring Daniel Craig. (Shockingly, the part when a giant flying saucer kidnaps Bond’s daughter, not to mention the evil plot to kill all men taller than 4-foot-6, did not get carried over.)”

Screencrush’s Matt Singer unpacks the 50 coolest Pixar Easter eggs:
“Toy Story really birthed a ton of these Pixar Easter eggs. Pizza Planet was the film’s space-themed pizza restaurant; it or its delivery truck have popped up in every Pixar movie since except The Incredibles. The cameos started in A Bug’s Life, where it pops up in the background of a shot. Pixar even managed to work the truck into Brave, which was set in a medieval forest. (A wood carving of it is visible in the witch’s cottage.)…When Al from Al’s Toy Barn calls in a restorer to repair a damaged Woody, the man who shows up is Geri, the title character from the Pixar short ‘Geri’s Game,’ about an elderly man playing chess against himself. I guess we know what Geri does as a day job now.”

IndieWire’s Sam Adams shares a letter The Telegraph’s Tim Robey received from the one person who really, really hated It Follows:
“Why is the initial screen victim running out of her house in her underwear and red high heels? What teenage girl would be dressed like that in her home with her dad? Is this some kinky fantasy the writer/director wanted to put on film? Ask any young woman if — even when scared — she would attempt to drive wearing stiletto heels! The entire premise of the movie — a creature that stalks you unless you have sex with someone — is ridiculous. How did this sequence of events get started? Where did the creature come from, and why would it be driven to kill the most recently infected person? In order to protect yourself from the creature you have to pay it forward (or ‘lay it forward’ if you will). How did anyone ever figure this out? And why would that work? And supposing that the creature did work its way through killing all of those going back in the chain, then what? What would it do? What would happen to it? Hugh/ Jeff says there is ‘only one’ of these creatures — how does he know? …”

Birth. Movies. Death.’s Britt Hayes revisits the still-life portrait of depression in Melancholia:
“Perhaps the only keys to deciphering Justine's depression lie in three elements: her name, and the two paintings she furiously selects in the study. Von Trier takes the name Justine from the Marquis de Sade novel, in which a young woman endures years of sexual punishment only to be struck by a bolt of lightning after she unburdens herself. Von Trier's Justine may view her relationships, and her current matrimony in particular, as forms of punishment: she submits herself to torturous normalcy but is unable to obtain the happiness it should provide. In the opening sequence, one scene finds Justine standing alone on the golf course, staring at her hands in wonderment as lightning emanates from her fingertips, another nod to de Sade's novel. While alone in the study, Justine becomes agitated by the modernist abstract paintings displayed in books on the shelf—they are angular and ugly, and too simplistic for this occasion. Instead—as if at random, but that cannot be so—Justine opens two books to two paintings: Sir John Everett Millais’ Ophelia, which depicts the tragic character from Shakespeare's Hamlet, drifting in the water and held afloat by her ceremonial gown; and Pieter Bruegel's The Hunters in the Snow, depicting an unsuccessful hunt in a harsh winter.”