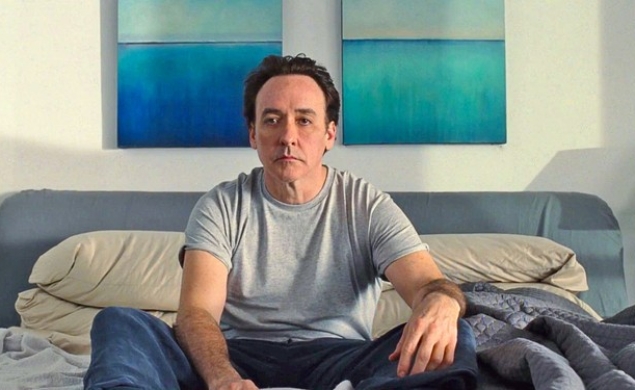 Grantland’s Steven Hyden on “The Dobbler Effect,” or the good vibrations (and martial artistry) of John Cusack:
“These days, it only seems like the 48-year-old Cusack will take any role that comes his way. He’s become the chill Nicolas Cage, with a filmography loaded with many straight-to-VOD movies you’ve never heard of, with titles you’ll instantly forget: The Factory, The Numbers Station, The Frozen Ground, The Prince, Reclaim. Cusack’s higher-profile projects in recent years cover the full spectrum of camp — there’s enjoyable camp (Drive Hard), scandalous camp (The Paperboy), self-aware “smart” camp (Hot Tub Time Machine), and high-minded art camp (Maps to the Stars). Should you decide to sample one of these films lurking in the nether regions of your Netflix queue, you’ll find that Cusack remains a highly watchable and forthright actor. He exudes intelligence, even when the movie is lobotomized. For whatever reason, one of the most appealing romantic leads of his generation has played a lot of creeps lately — serial killers, hit men, Richard Nixon. But his commitment to the seediness of his characters is commendable. When Cusack slams his sweaty, naked crotch into Nicole Kidman’s backside while she’s bent over a washing machine in The Paperboy, it is sufficiently repellent. Cusack is solidly professional even when the scene calls for grotesquerie. But Love & Mercy is different. It’s a prestige film with an A-list cast, and Cusack’s performance is bracingly vulnerable. ‘It took me about five years to get something this good,’ he told me in Chicago. ‘Just searching and trying.’ ”

Movie Mezzanine’s Angelo Muredda on Roar and the limits of ironic appropriation:
“Whatever the hook that gets you to buy a ticket for a film like Roar, it doesn’t necessarily prepare you for the actual film, whose strange mix of guilelessness and compromised staging make it difficult to wrangle into a retroactive joke at the filmmakers’ expense. It’s tempting but a bit too easy to dismiss Marshall out of hand for the disjunct between his ambition and his filmmaking talent, and to locate Roar’s worth mostly in its ironic appropriation as a strange lost object from the 1980s. The Exorcist producer had no directing credits to his name before embarking on the ill-advised project, a pre-Jurassic Park adventure thriller about the simultaneous beauty and terror of nature. Marshall’s missed marks in Roar, though, aren’t merely those of an inexperienced director: they’re also the failings of an overtaxed patriarch, animal wrangler, and manager of a small, precarious wildlife preserve. Those limitations stretch Roar to the brink of the unwatchable, as the director is forced over and over to run onscreen interference between animals and cast members (read: employees) in the guise of the film’s blank hero, where each intervention is more uncomfortable than the last.”

Esquire’s Anna Peele lets Judd Apatow annotate his own profile:
“Apatow's primary gift, even more than writing or directing, seems to be finding and fostering nascent comedic superstars. He saw latent greatness in the not-immediately-obvious future-A-listers Jonah Hill, Jason Segel, Lena Dunham, Steve Carell, and Amy Schumer. He looked at chubby, gurgly 17-year-old Seth Rogen and said, ‘Oh, Seth's a movie star.’ But Apatow claims he isn't deluged by people eager to be transformed into the next Rogen. ‘I wish everyone was kissing my ass and trying to get in the door, but it really doesn't seem to happen that often. I think that's because it just requires so much work. With me, it's not like Judd's gonna give me a job. It's more like Judd's gonna grind me for half a decade.’ The many drafts written during his years-long development process are in service of a lesson learned from Garry Shandling in the writers' room at The Larry Sanders Show: ‘The more personal it is, the more universal it is.’ That Apatow has internalized this decree is obvious, and even in the work of his apostles he keeps telling his own story: a stunted but nice-enough man (or woman) overcomes anxiety and cuts back on bad behavior in order to accomplish his goals and appreciate his life. Or, more plainly, ‘The main philosophy [in my films] is Don't be a dick.’ ”

The New Yorker’s Daniel Engber on the misunderstanding of 3-D:
“I’ve been looking forward to the moment when 3-D emerges as a mode unto itself—not a gimmick or a money-making adjunct to the standard fare but an art form of its very own. Yet this recent spate of interest suggests that we may have hopped from one fluffed-up trend to another. With some notable exceptions, the new breed of uppity 3-D seems less like an exploration of the format than an exercise in camp appropriation—a way of punching up at corporate greed and spoofing Hollywood excess. It’s too-cool-for-school 3-D, the format seen through Belmondo shades. See how the auteurs smirk and keep their distance from 3-D, even as they sell it on the screen: ‘’There’s something childish about’ it, Noé told reporters in Cannes. ‘It’s like a game. … What can I do which will amuse me?’ That’s been a standard pose for those in his position: wry half-assedness, if not disavowal. Noé says that he didn’t bother committing to 3-D until just three weeks before the movie started shooting, and then only made the choice when he learned that the French government—the French government!—gives out grants for stereoscopic production. (‘I love France,’ his producer said.)”