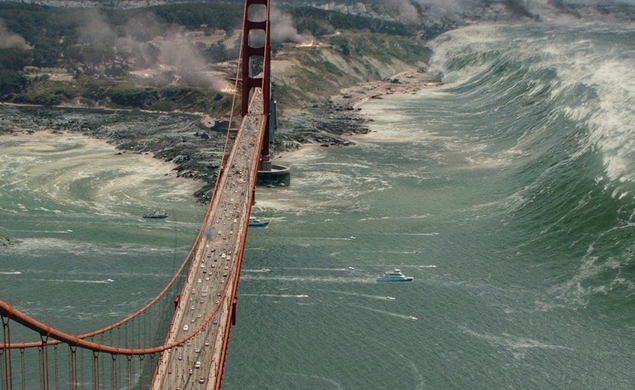 Entertainment Weekly’s Darren Franich asks, “Is a bad original film better than an okay sequel?”
“Here’s something to consider. That weekend we just had, with the financially successful/critically not-unsuccessful San Andreas and the calamitous-on-all-counts Aloha opening on the same day? That’s the last time this summer that the two big new wide releases of the weekend are live-action original feature films: The kind of thing Hollywood used to make, when they made them like they used to. I know, I know. ‘Original’ is a shaky term, and San Andreas is just Dante’s Peak with earthquakes, and Aloha is just the mash-up of The Bourne Ultimatum and How Do You Know that somebody somewhere somehow badly wanted…’Originality’ as a concept has maybe never been less essential to Hollywood. By general consensus, the best wide-release movie of the year so far is Mad Max: Fury Road, the fourth film in a franchise that started when Cameron Crowe was undercover in high school. The 2015 film that I’ve personally seen the most—four times in theaters, I can’t help myself—is Furious Seven, the film where a gang of car thieves save America from a private terrorist by crashing a bulletproof car through three skyscrapers. (Not to be confused with Aloha, the movie where Cameron Crowe archetypes save America from a private terrorist by blowing up a nuclear satellite with a boomer-rock mixtape.)”

Birth.Movies.Death’s Meredith Borders recommends seven movies about Hollywood you should see instead of Entourage:
“THE BAD AND THE BEAUTIFUL , dir. Vincente Minnelli, 1952. Vincente Minnelli’s 1952 melodrama The Bad and the Beautiful is pretty proud of itself for daring to look beyond the glitz and glamour of Hollywood to expose the raw ambition and ruthlessness that drives the industry’s most successful individuals. It’s one of the first films to question the morality of the Dream Factory, but its ‘bravery’ is somewhat undercut by a murky message that wants to have it both ways. Told via flashback, The Bad and the Beautiful paints a portrait of Jonathan Shields (Kirk Douglas), an ambitious film producer who claws his way out of Val Lewton B-movie land (his first big hit is a transcendent genre effort called Doom of the Cat Men) to become a major player in the industry. His rise is recounted by a trio of souls -- an actress (Lana Turner), a director (Barry Sullivan) and a writer (Dick Powell) -- who he seems to have chewed up and spit out on his way to the top. But the catch is that the film veers from being an indictment of the industry, choosing instead to point a finger at these “victims,” in each case laying bare that their interactions with Shields, including his various betrayals and transgressions, have directly resulted in unparalleled success for each of them.”

Grantland’s Shea Serrano has the “definitive history of Arnold Schwarzenegger’s greatest action-movie quips”:
“Arnold shows up to a mutant colony in Total Recall. One of the mutants, a guy named Tony whose head looks like his brain is on the outside, says,’“You got a lot of nerve showing your face around here, Hauser.’ Arnold looks at him, studies his appearance, then half-laughs, ‘Look who’s talking.’ I’m not sure how I feel about this one. Nearly every single other Arnold quip is one aimed at a person who is bad or evil or a combination of the two. In this case, though, Tony’s not a bad person. He’s a guy who’s feeling defensive because he knows Arnold is a villain. Making fun of Tony’s face probably isn’t necessary and definitely isn’t anything other than rude. I don’t know. Sidebar: Working on these sorts of articles is fun because you always end up stumbling into information you otherwise never would have found. For example, I’ve seen Total Recall many, many times. It wasn’t until I watched it for this story that I realized that Ugly Tony is played by Hank from Breaking Bad. I literally woke my wife up when I figured it out. I said: ‘Boo. Boo. Wake up. Boo, you know the guy from Total Recall with the brain face? That’s Hank from Breaking Bad.’ To which she replied: ‘I can live with a lot of things. One thing I can’t live with, though, is you waking me up to tell me things about Arnold Schwarzenegger movies.’ ”

The New Statesman’s Tom Shone wants to help the world “understand Star Wars fans”:
“This is the magic bullet theory of film history, the idea that but for one film we would all be sitting around watching John Cassavetes movies, rolling doobies, sticking it to the men in suits. The problem with this argument is that it gives Star Wars both too much credit and too little: too much as a harbinger of cinematic destiny and too little in terms of its qualities as a film. In reality, New Hollywood directors had been retooling old genres as blockbusters all decade long – The French Connection, The Exorcist, The Godfather. Martin Scorsese had been sniffing around Philip K Dick for years. Brian De Palma had his eye on a sci-fi property. Six months after Star Wars came out, Steven Spielberg released Close Encounters of the Third Kind, using its own version of the Dykstraflex cameras that George Lucas used to liberate the X-wings in Star Wars. Watching rapt in the front row were Ridley Scott, Robert Zemeckis, John Lasseter and James Cameron. Anyone who thinks that were it not for Lucas’s lightsabers the creator of The Terminator would have upped sticks and called it a day is dreaming.”