My Best Friend’s Wedding will be remade... in Chinese 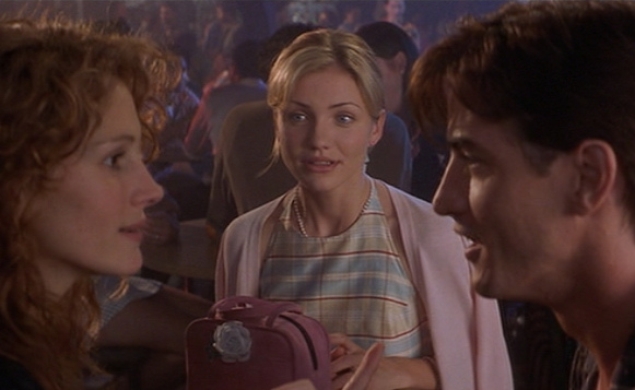 My Best Friend’s Wedding is the perfect romantic comedy. I say this unironically, having rewatched this movie at least 13 times, and at least 10 times while yelling to everyone in the vicinity, “This is the perfect romantic comedy!” It’s equal parts hilarious and heart-smashing, managing to sell a sincere romance while also cleverly sending up rom-com tropes, seamlessly pulling off genuinely surprising story developments, and creating complex, lived-in characters who we root for even while they’re on their worst behavior. And then there’s Dermot Mulroney’s lip scar, which deserves a thinkpiece in and of itself, one that I hope to someday bestow upon this Earth.

In the 1997 film, which grossed nearly $300 million worldwide, Roberts plays Jules, a two-faced, big-haired food critic whose innate fear of commitment ended her college relationship with possibly the most attractive and charming human alive (aforementioned lip-scar-owner Mulroney). By the time we’re introduced to the two, they’ve become the titular best friends, replete with flirty repartee and plans to marry each other only if they’re not engaged by the ripe old age of 28 (wow, the ’90s, guys). But when Jules finds out he’s engaged to another woman (Cameron Diaz), she realizes she’s loved him all along, and heads to the wedding in hopes of breaking them up.

In his Career View of Julia Roberts, my preceding News Captain Matt Singer agreed with me that My Best Friend’s Wedding stands out in the cliche-ridden rom-com genre, as well as in contrast to the rest of Roberts’ career: “The major wrinkle the film brought to [Roberts’] increasingly rigid formula was to cast her as both the protagonist of the film and the villain, a combination that could only work with an actor of Roberts’ innate likeability…It’s the rare romantic comedy that is actually (and even melancholically) romantic and repeatedly funny.”

So it naturally follows that now, we’re getting a remake of My Best Friend’s Wedding. Two decades later. In Chinese. Variety reports that Sony and China Film Co. Ltd. are developing a remake of the film, set for release in China on Valentine’s Day 2016. It’ll star Shu Qi, Feng Shaofeng, Song Qian, and Ye Qing, and Alexi Tan (Blood Brothers) will direct and produce. Looks like it won’t be totally faithful to the original (outside of the whole “being in Chinese” thing, I mean). Here’s the official summary:

“The remake will center on a pair of journalists—male and female—who have grown up together as best friends. The man falls in love with a wealthy Chinese girl who has been studying in the U.K, and asks his female friend to be his ‘best man.’ The female friend realizes that she loves him, not just as a friend, and sets out for London a few days before the wedding determined to win him back.”

Before we “WTF” this news forever, let’s consider David Ehrlich’s 2014 essay, “The curious case of the Japanese remake of Sideways.” In the piece, Ehrlich examined Saidoweizu, a Japanese film that sort of remade Alexander Payne’s 2004 boozy road trip film. “The idea behind Saidoweizu isn’t ‘What if Sideways took place in Japan?’ it’s ‘What if everyone in Sideways were Japanese?’ ” wrote Ehrlich. “While it would be appropriate to call the film a remake, it might be more accurate to call it a repopulation…The difference is not inconsequential, and the fact that the film never forgets that is its only real source of artistic value. Saidoweizu may not have been intended for Western audiences, but it doesn’t mean that this curious remake doesn’t have anything to offer us.” Later, there’s this important, ethnocentricity-shaming line: “[Saidoweizu] gently reminds Western viewers that being the world’s default audience doesn’t make them the only audience worth serving.”

In other words, America storms in, guns blazing, wearing Crocs, and reboots the shit out of foreign properties all the time, with results of, um, varying quality (Resurrection and The Returned, anyone?). It’s only fair that our international compatriots are extended the same courtesy, the same opportunity to jock and totally destroy a beloved work of art, or, as Ehrlich so poetically put it in reference to Saidoweizu, “try to put a prom dress on a porcupine.”