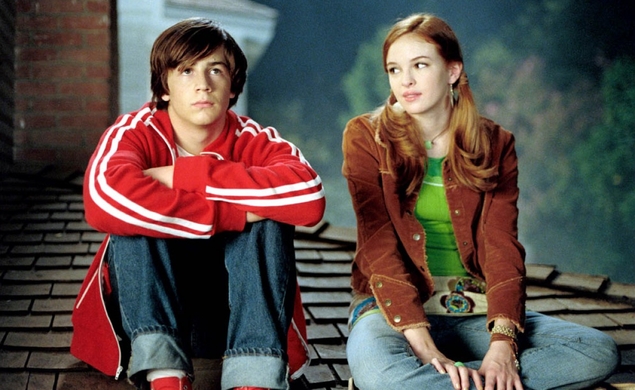 Six Degrees is a regular feature that utilizes one of the web’s many recommendation engines to find and examine films that are related to Hollywood’s biggest new releases—but removed by six entire degrees of other cinematic features.

The online recommendation engine Jinni (enjine?) allows its users to search for films and television series to watch (and presumably enjoy) using a variety of variables. You can simply search by movie or series (as I did this week to find something similar, though not exactly like the new Brad Bird release, Tomorrowland) to find “more like” the original title, or you can go a bit more nebulous and search by mood (Jinni classifies Tomorrowland’s mood as “stylized” and “exciting”), attitude, style, tone, or audience. Searching by “plot” turns up some unexpected keywords, like “escapades” and “obsessive quest,” which are finely tuned in a way that’s still somehow amusing.

By Jinni’s metrics, Tomorrowland is a “family outing” film with a “Hollywood tone” that banks on “young heroes” in service to its sci-fi and adventure genre. But how deep can we go inside Jinni’s recommendations to find another film that’s like Tomorrowland, but eh, not quite?

Each film that appears on Jinni includes a long list of “More like” titles to choose from if you enjoyed what the first film had to offer. A quick journey through the recommendation widget of Jinni, using only a film that appears within the first 20 titles offered up by the “More like” section, revealed plenty of films that reflect the same attributes of Tomorrowland. After the sixth connection, we stopped, only to find a feature that really does fit neatly alongside Tomorrowland: The very charming Sky High. Recommendation engines do work!

When Mike Mitchell’s Sky High hit the multiplex in the summer of 2005, the modern age of the superhero hadn’t quite taken off just yet. Two Spider-Man features had been released (in 2002 and 2004), and a third was on the way, though Spider-Man 3 was still two years off and, given the not-so-high-flying reactions to the second Tobey Maguire-starring feature, anticipation wasn’t exactly dominating public perception. The Marvel Cinematic Universe wasn’t even a distant dream. Batman had begun (literally, thanks to Batman Begins) just a month earlier, when the first film in the newly launched Christopher Nolan blockbuster franchise first hit theaters. The movie-going public certainly liked superhero movies, but they hadn’t yet gone gaga over them.

Which is why Mitchell’s film, which puts an original twist on the “young superhero” mythos, was surprisingly ahead of its time. Although the film is decidedly family-friendly (Jinni describes its attitude as “fantastic” and its mood as “feel good”), it’s also a smartly meta rumination on the place of superheroes in society (it would pair nicely with The Incredibles, to be sure) and the highly relatable pains that inevitably accompanying modern teenagehood (feel free to double-feature it with Sixteen Candles or Pretty In Pink). And, much like Bird’s new film, it’s also about embracing the possibilities that come with growing up with incredible (and, as appears to be the case for young Will Stronghold and his new pals, sometimes not so incredible) abilities. It’s a fine balance that few superhero features have yet been able to strike, that mix of genuinely awkward teen tale and budding superheroic story, the sort of thing that the various Spider-Man features (now bound for their third modern iteration) keep trying to capture with decidedly mixed results.

More than anything, however, Sky High is just a lot of fun to watch.

Sky High winks appreciatively at its genre, thanks to stylized bits that look pulled straight from the pages of a comic book (although Sky High itself is from an original idea), the appearance of standard superhero powers (the students of Sky High can run fast or stretch or make things grow or fly, and so on and so forth), and even some especially clever casting (Lynda Carter, Wonder Woman herself, plays the school’s principal and looks fantastic while doing it, while Bruce Campbell is the steel-jawed Coach Boomer and Cloris Leachman is the school nurse).

Young Will Stronghold (Michael Angarano) is the son of the world’s most beloved superhero duo—The Commander (Kurt Russell) and Jetstream (Kelly Preston)—but he isn’t yet in control of his surely copious powers. Okay, he doesn’t have any powers, but Will’s incredible genealogy (he’s third generation!) means that he must have something special to offer the world. Right? Right! Sure! Will’s big secret—don’t all superheroes have big secrets?—is hard enough to hide from his parents, but once he hits Sky High, expectations reach a fever pitch. Most Sky High students only have one superhero parent, The Commander reminds Will before he literally jets off for his first day of high school, and he should really go easy on the rest of his classmates, lest he make them feel inferior.

It’s Will who feels inferior.

The revelation that Will doesn’t have a power to show off—no flying ability, no super-strength, a disappointment to the Stronghold name—lands him in the no-man’s-land of Sky High: He’s a sidekick. That the power-less Will is a sidekick—in P.C. Sky High parlance, he’s “hero support”—is a major blow to all of the Strongholds, and the impact it has on their worldview is profound. The Strongholds are the darlings of the superhero world, and that Will won’t be able to join them (“side by side…by side”) breaks both The Commander and Jetstream’s hearts. It doesn’t last too long—Will gets his powers during a cafeteria-set brawl—but it’s a snappy way to put a unique spin on the traditional high school movie subplot about being dorky and out of place. Some films have ponytails and glasses, Sky High has a genetically unique kiddo who evolves a touch too slow to match his peers.

Once Will gets his powers, he’s transferred to the hero class (sorry, sidekicks), and is immediately elevated to a higher echelon of Sky High society. In short, he’s cool now, and as every high school film about geeks going cool has taught us before, that’s not a good thing.

Although the film works stunningly well as a high-school story with a heroic twist, Sky High also features a super-sized subplot that ties together both its high school politics and its superhero-styled adventures. In keeping with its teen theme, this subplot is personified by Will’s two romantic interests: the label-averse Layla (Danielle Panabaker) and the hip student body president Gwen Grayson (Mary Elizabeth Winstead).

As Will slips deeper into the cool pool, he’s blinded by his new social status and the increasingly friendly Gwen, hurting his loved ones (like Layla, like the rest of the sidekicks) in the process. It doesn’t take long for Will to wise up, but by then, the cracks are beginning to show in Gwen’s façade: she’s really Royal Pain, the super-evil mega-villain his parents first defeated years ago (turns out, Royal Pain’s so-called Pacifier is an anti-aging gun, and Gwen has waited to grow up all over again in order to carry out her revenge). Only a maniac would want to go through high school twice.

Complete with a Homecoming Dance-set battle (hey, it is high school) that sees whole packs of attendees being blasted into baby-dom, Sky High packs in some amusing action to wrap the whole thing up in exceedingly charming and tongue-in-cheek faction, both feel good and fantastic.