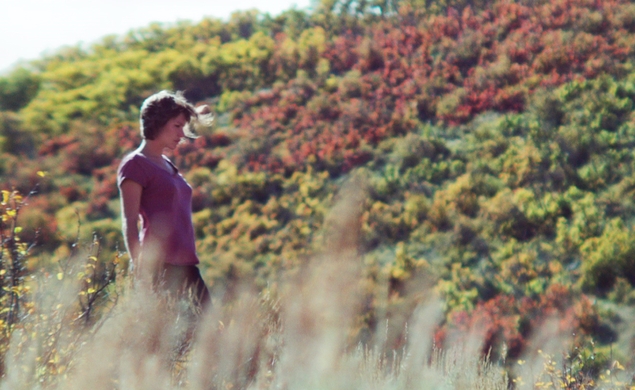 Gregory Kohn’s second film, Come Down Molly, is unusual in a number of ways. First, it deals with a woman who’s having trouble making an emotional connection with her toddler son, but it doesn’t vilify her as a bad mother for her lack of feeling, or provide easy fixes. Second, it follows her as she takes a break for a weekend and heads for a cabin in the woods with seven male friends, many of whom she’s known since middle school—but it isn’t particularly interested in sexual tension, hookups, or flirting—it just lets her be one of the guys, as a person first, and a woman second. Third, when Molly (Eléonore Hendricks) and her friends take mushrooms and spend their weekend tripping, the film doesn’t look for cheap laughs in drug humor, or try to put their subjective experience onscreen. Fourth, Come Down Molly winds up gently but firmly holding a pro-tripping agenda, as the cabin vacation and the mushrooms give Molly some time outside her anxiety about motherhood. It’s a luminously shot film, light on plot but heavy on friendly banter and personal interaction, and shot in some breathtakingly gorgeous environs, but with an non-preachy yet unmistakable pro-drug agenda. Come Down Molly is currently seeking a U.S. distributor. It made its world première at the Tribeca Film Festival on Thursday, April 16.

The Dissolve: The post-screening Q&A led off with Tribeca’s representative saying Come Down Molly has been really divisive, over whether Molly’s actions are supportable. Has that been your experience with people who’ve seen the film?

Gregory Kohn: I don’t know if the film says anything about that at all, but some audience members judge a woman for these things. I do this dance in saying, “What if this character was a man? Would you have that same kind of judgment about a man leaving his family for a weekend?” We talk about men being afraid of parenthood, or being scared of being grown up, and all the things that come with that. And with women, it’s glossed over. There’s so much pressure that says, “If you’re not a good mother, then who are you?” I’ve read blogs with mothers reaching out through the Internet, basically saying, “I don’t know who to talk to about this. I love my children, but if I was given the choice to go back and not be a mother, I would do it.” I would read these late at night, and just be blown away. Multiple people had this feeling, and I thought, “This is something that needs to be discussed.” I hope people don’t view Molly from a moral stance, and that they can empathize with her, and realize she’s just doing the best that she can. In this film, everybody’s trying to do the best that they can.

The Dissolve: We see very little of Molly’s relationship with her husband. Is that to help prevent people from judging her?

Kohn: Yeah. Their argument scene is one of the hardest scenes I’ve ever had to direct, because she can’t come off like a jerk, and he can’t come off like an asshole. It was really hard to make an argument scene where it’s just two people that are confused, who don’t understand what’s happening, and she’s just at this moment where she can’t do it anymore. And it’s not because of him, and he needs to understand that. Though as far as why he’s not in it more, it’s just a structure thing. We needed to move the movie on as quickly as possible.

The Dissolve: From the Q&A, it sounds like all the guys in the film are college friends of yours.

Kohn: One of them is from high school, one of them’s a college friend. Everyone else, I met post-college in my New York life. Some of them went to college together themselves. But they are all immediate friends of mine, even though some of them didn’t know each other. The character of Dave [played by David Jette] for example, didn’t know any of them, but everyone else knew each other, and was very close to each other. That was really important to get that dynamic, because I see movies sometimes where there’s a group of friends, and they don’t feel like real friends to me. I know that’s not detrimental to some movies, but I get a little uncomfortable when I see that in a movie, because I know what real friends are like. I just wanted to capture that accurately. And part of it was also selfish. I was moving to L.A., and they all live in New York, so I wanted to make a movie that I could watch when I was 80, and reminisce about my thirtysomething friends.

The Dissolve: And Eléonore Hendricks was someone you met professionally?

Kohn: Eléonore was in my first film, Northeast, actually as the Molly character. We became friends on that set. This movie was really just going to be about psychedelic mushrooms. No plot was good enough, and I was struggling to find the story. It was two years of struggling with this idea, and then once I started thinking of Molly and Eléonore, that’s when the movie really started to take shape. Once I knew it was about this character and what she was dealing with, it became a real, realized movie.

The Dissolve: How did you come to that idea of a woman navigating friendship with a large, otherwise single-gender group?

Kohn: That actually came uninterestingly. I was writing it originally with a character closer to myself. You write what you know, and you just start somewhere. And then when it became a woman, I just never decided to change any of the guy friends into girls. Also, something was mentioned to me when I tripped the first time. I said, “We should film this, because this is amazing.” That was where I came up with the initial idea to make a movie about mushrooms and psychedelic drugs. During that trip, I remember someone saying very vividly, “The whole dynamic of this would change if there was one girl.” I thought from a plot standpoint, maybe someone would like her, but then she would hook up with someone else. And I remember thinking, “It doesn’t necessarily have to be that. Maybe the dynamic wouldn’t change.” And I thought that would be interesting too, as if she was a tomboy, or had guy friends growing up. And now through motherhood, she’s caged, and it’s interesting to see her re-connect with that old version of herself. That’s how that dynamic came about. It worked out great, because of the performances and the chemistry of the cast.

The Dissolve: You’ve said the script was largely generated via improv. How did you work with the actors to develop scenes?

Kohn: We would have conversations. We would talk about it. That’s how I direct. I would say, “What do we have, what are we doing, what could be better, how are you feeling?” I’m asking questions of everyone on set, but mostly the actors. The scene where Eléonore is talking about her vagina with the guys, and it’s dangerously funny, it walks this really weird line—that was Eléonore’s idea. A lot of it for me as a director was setting the table for creativity and collaboration, so everyone feels open to give their ideas, because if it makes the movie better, it’s great for all of us. So we were constantly working together to do that.

The Dissolve: So much of this movie is in the lighting, especially in the field. Was it all natural lighting?

Kohn: Oh yeah. We let that field, which is in Colorado and is the most beautiful place I’ve ever been, just work on its own. I said to my cinematographer, Chris Mosson, “If we can capture half of what this place looks like, it’s going to feel like tripping, and we won’t have to do anything.” It’s such a majestic place, even if you’re not on drugs. Just to sit in that field for an hour is wonderful.

The Dissolve: Movies that feature drug trips almost always screw it up by trying to show audiences what people on drugs are seeing, or trying to put subjective feelings onscreen. What was behind your thinking in avoiding that, and sticking with the third-person POV?

Kohn: Exactly what you just said. I hate shitting on other movies, but I’ve never seen it done right. And part of that was so frustrating for me when I tripped for the first time. I was thinking, “This isn’t at all what they told me it would be.” I was thinking I was supposed to see dragons, or the trees were supposed to morph. Everything was sort of breathing, and there was movement to everything, but mostly, we were giggling and connecting to the Earth and to ourselves. It sounds so hippie-ish, but it’s just this amazing feeling that everything makes sense, and yet everything is complete chaos at the same time. It’s like existentialism personified, and it’s just amazing.

Kohn: I guess that’s a really good question, and I almost don’t know the answer. I have a really big problem with things that aren’t true. It’s probably a flaw I carry through life. I just have this obsession with truth, and I’m always searching for it, and I want to discover it, even though I know intelligently that I’ll never find truth in anything. I will die before I understand why we’re here. I will die before I understand the reason for anything. And yet I am still fascinated by it. Even something as simple as like, “They lied to me about what a drug experience is,” it gets underneath my skin and causes me to, almost in a panic attack, show people what it’s really like. But it’s not just with drugs. I want to show what it’s like with womanhood and motherhood, and with talking to my friends who are moms. Why aren’t we talking about this, when some people are struggling so hard with it? I know a lot of people wish the movie was more about that. I didn’t go down that route either. I wanted to open the conversation to it, and show what it feels like, as opposed to giving out some moral stance, or an in-depth examination of what’s actually going on with people, emotionally or chemically, or whatever it is.