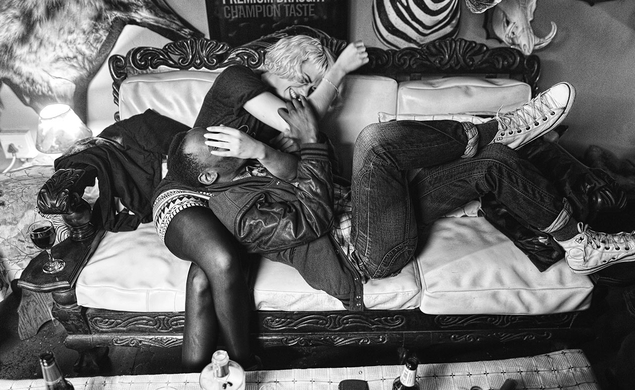 Tasha Robinson is at the Tribeca Film Festival in New York City, talking to filmmakers about their projects shortly after their premières. The Tribeca 10 interview series addresses some key ideas in these brand-new releases in 10 minutes or less.

Twenty-three-year-old director Sibs Shongwe-La Mer isn’t just writing what he knows, he’s directing and starring in it, too. His stylish debut feature, Necktie Youth, opens with a girl named Emily leaving a plaintive voicemail message for her boyfriend Jabz (Bonko Cosmo Khoza) shortly before hanging herself, live-streaming her suicide to the Internet. It’s based on a real incident in Mer’s life, and set in the affluent, elite Johannesburg suburbs where he grew up. As Necktie Youth observes low-key interactions among Jabz, his far less rich best friend September, and a loosely connected group of acquaintances around them, Mer captures funny and ugly scenes involving many familiar tropes of angsty teen dramas—drugs, sex, time-killing conversations, angst, philosophy, and gossip—but places them all in a world that looks unfamiliar to American eyes. Necktie Youth is currently seeking a U.S. distributor. It made its North American première at the Tribeca Film Festival on Friday, April 17.

The Dissolve: The film opens and closes by focusing on Jabz, but it’s a huge ensemble piece, packed with characters who can be hard to connect. Why did you decide to focus on the community rather than individual characters?

Sibs Shongwe-La Mer: Because I think that actually shows a lot of Jabz’ inner torment. It’s about having a lot of friends, and September as his best friend, and not being able to really communicate, or articulate his suffering. I think making it an ensemble really isolated him in a better way. It accentuates his loneliness. And I feel like that also speaks a lot to this generation. There’s so much social media and communication, but no talking, and no verbalizing. I really thought the best way to do it was to surround him with kids and ask, “What are the other kids feeling?” Jabz isn’t expressing his feelings, but Tania is breaking down. It shows his situation isn’t unique. I really didn’t want it to seem like just one kid was depressed; it’s a lot of them. Even September, who is joking all the time, there might be a sadness behind him too. And I thought putting people all around him was the best way.

The Dissolve: At the beginning, it feels like Emily might be the connective thread between the characters who are strangers. But they’re also connected by their neighborhood. Are there other, more thematic links?

Mer: I think the post-apartheid generation is one. That’s why I used a lot of the flashback sequences to show that they’re all part of this generation, growing up in a country with a democracy that’s younger than they are. Whether it’s the suburbs, the isolation, the need to put on a sense of bravado or pretend to be okay that links them, all the characters are similar in many ways—practically, and emotionally, and existentially. In how they think, and in how they refrain from dealing with the realities of their own lives.

The Dissolve: Emily and Jabz are both introduced with lengthy voiceover, before we see their faces. What went into that decision?

Mer: The film is semi-autobiographical. I knew a girl who committed suicide and filmed it, a girl I talked to a lot on the phone. And I wanted her voiceover to be the way Emily haunts Jabz—the call from beyond that keeps on speaking to him, that keeps on reminding him of something that he wasn’t paying attention to before. And Jabz, structurally, I wanted the opening to be ambiguous. Is he talking about Johannesburg and flying over it from the beginning? Is he dead? Even at the beginning, he seems to be telling his story in past tense. I wanted it to be like, “Maybe these are two voices that were already gone before we even knew.”

The Dissolve: There are these occasional moments where the characters speak words and they flash onscreen, but it’s a rare occurrence. What did that signify?

Mer: I’ve always been in love with that. It originally started as an homage to Jean-Luc Godard. That was one of the things when I started to get into cinema, I got really interested in stylistically. Sometimes it doesn’t need to feed narrative 100 percent. It can also have this space where the words are both visual and auditory. I played with the music, trying to make miniature music videos that speak to exactly what’s happening in the scene. So I also wanted to play with media a bit, and show that even though we are watching a narrative in the story, it doesn’t need to be rigid. Film seems to be so rigid right now. Like, “If it doesn’t serve narrative, leave it.” But I also wanted to show the style by playing with different mediums. We don’t necessarily have to make it like, “Oh, it’s a sad scene, so a little bit of violin and a slow pan shot.” There’s a lot of ways to address cinema and style, and also have your narrative. They can be different bodies of a film that can make them more textural.

The Dissolve: I’ve been reading a lot lately about how difficult it is to balance lighting for black skin, especially if you have Caucasians in the same shot. Here, you’ve got very dark-skinned and white-skinned people together in half the shots. What was that like as a technical issue?

Mer: We experimented with a lot of different lenses and lens screens. Me and my cinematographer spent a lot of time photographing, addressing our images as still photography. So we’d go out and say, “We’re on this lens with this aperture. What are we seeing with black and white?” Then we would line up what red would look like, what green looked like with a different filter. It affected our wardrobe, because we decided everyone was going to be wearing heavy patterning. So we had to playing with a lot of factors and influences. Most of our producers wanted us to shoot in color, but we did so much work on black and white, we were like, “No, we have to shoot this movie in black and white. We keep putting black people and white kids against white walls, and information is getting lost.” Keeping it so clean was really tough.

The Dissolve: At intervals in the film, you have your characters explaining themselves to a documentarian who’s asking about Emily. In your mind, who’s making that documentary?

Mer: Initially, it was supposed to be an American company. Or European, I hadn’t decided. I wanted to focus on the idea of this Eurocentric interest in Africa that Africa doesn’t have in itself. Due to colonialism and such, Africa is never really proud of anything African until it’s validated by an American company. The kinds of films I like never got picked up until they played Berlinale, or got other interest abroad. Africans never really have faith that Africa should be self-contained. We always look overseas for validation financially, economically, politically before we can say, “Oh, that’s cool.” But then I met a South African actress who really worked, who gave a sincerity to the part. It felt like it wasn’t acting. It felt organic and almost a bit too forward, too pushy. It had the right energy. She was so perfect for the role that I abandoned that theory.

The Dissolve: Is “flex” a real South African slang term? It’s used in so many expressions and so many ways in the film. Can you explain flex?

Mer: Oh jeez. This is one I get. People are like, “Why all the flexing?” No, it’s not something I’d heard people use, besides Drake in one song, where he just says, “Nigga, I’m just flexing.” A lot of the script was completely improvised, and I would just say things, thinking “They’ll get the connotation of that.” So Bonko and I just started speaking nonsensical slang to each other, and flexing just became this thing. Even in the cut, I never consciously realized we did it so much. People always come up to me and say, “Flexing! All this flexing!” We never intended it to be used so much and in so many different ways in the film.

Tomorrow: Lynn True and Nelson Walker, of In Transit.