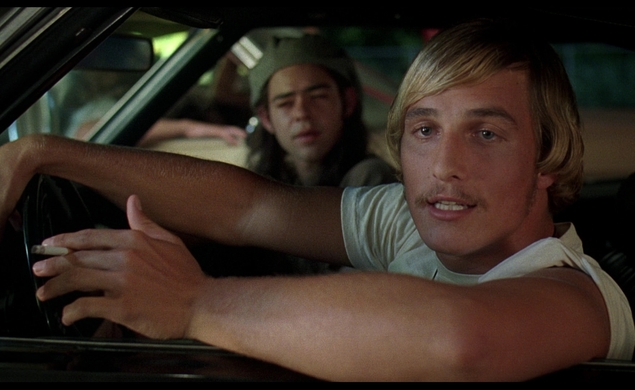 There is a wonderful special feature on the Criterion Collection edition of Richard Linklater’s 1993 film Dazed And Confused of some of the cast’s auditions. Matthew McConaughey is auditioning for the role of über-stoner David “Woody” Wooderson with Wiley Wiggins, and despite being clad in an anachronistic Headbanger’s Ball T-shirt in a nondescript room, McConaughey has the character down flat. He doesn’t need a costume or makeup or elaborate set dressing. He doesn’t need the various components of movie magic to make the character come alive. The entire performance is right there in the audition: the attitude, the drawl, the creepy friendliness and friendly creepiness, even his weird mentor/corruptor relationship with the younger man.

It was as if McConaughey wasn’t playing a fictional character at all, but tapping deep into the Woody part of his soul. McConaughey is intimately associated with Dazed And Confused, but he doesn’t actually make his first appearance until 40 minutes in, after we’ve already been introduced to the rest of the more age-appropriate cast of high-schoolers as they drink, smoke, and indulge in the great American pastime of taking pleasure in abusing the powerless on the last day of school.

On paper, the character McConaughey made famous is a total sleaze and almost completely unlikable. He’s, at best, parasitic in his pursuit of underaged girls, the quintessential dude who never grew up and keeps hanging around long after everyone else has moved out because he sees no real point in growing up when the pleasures of eternal adolescence—as measured in beers, bong hits, and hot girls laid—are so abundant and so irresistible. If Woody were played by an actor of less immediate charm, he easily could have come off as a self-satisfied sleazebag. But McConaughey plays that brazen arrogance as an admirable form of confidence. The man knows what he wants out of life and isn’t shy about going after it, and he doesn’t feel the need to apologize for the way he lives his life. He is a man totally at ease with himself, and that has a way of putting audiences at ease as well.

Looks are a big part of it. Re-watching Dazed And Confused, I was reminded of a Robert Smigel-written TV Funhouse short on sexual harassment whose advice for avoiding getting called out for sexual harassment boiled down to, “Be handsome.” On the same level, McConaughey’s fabled external handsomeness undercuts some of the psychological ugliness of the character. He’s so effortlessly charming—and handsome—that it’s a pleasure to be in his company no matter what creepy, lascivious things come out of his mouth. Lines that must have read a little dry on paper, like Woody responding to Mitch telling him he didn’t have a joint, “It’d be a lot cooler if you did” roar with good humor when delivered in McConaughey’s mellowing drawl. Part of the joy of the performance lies in the obvious pleasure the actor takes in the role. What really sells, “It’d be a lot cooler if you did,” for example, is the little stoned giggle of glee the actor lets out, almost as a tic, as if delighted by his own wit.

We should hate Woody. Or dislike him the same way we do Ben Affleck’s bullying O’Bannion. Yet when McConaughhey walks through the pool room in slow motion in tight pants to Bob Dylan’s “Hurricane” with a rooster strut of such divine confidence, he seems like the coolest guy in the world, even though he’s really just a small-time loser. From there on, Woody is an essential fabric of the film, even though he’s seldom in the forefront of any given scene. The film belongs to him, even if he’s only in the foreground for about five-to-ten minutes.

Woody is an outlier in Dazed & Confused. He’s not a corrupt authority figure or a bullying senior or a terrorized freshmen to be. Yet he moves easily and smoothly between these disparate factions. He’s a good-time friend to everyone, every stoner’s ideal smoking buddy. The legend of McConaughey began with a tiny role that made a great big impact in a movie whose significance wouldn’t be recognized until years after it flopped. Yet just as McConaughey’s performance was complete when he auditioned for the role that would make his career, the elements that would someday make McConaughey an Oscar-winning movie star were present in his masterful debut performance.