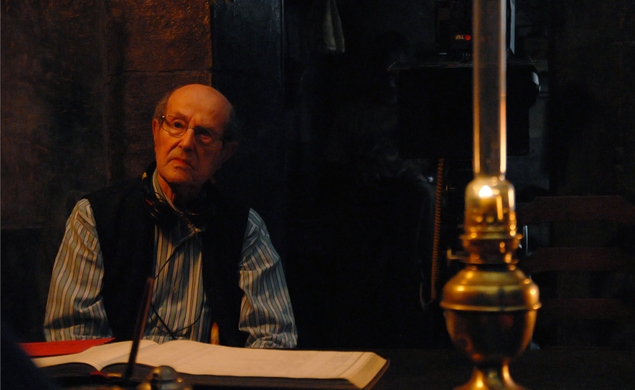 Cinema has lost its human bridge to the past. Portuguese director Manoel de Oliveira has died at age 106, ending a career that began in the silent era and concluded in a flurry of activity that would intimidate filmmakers not only half his age, but half of half his age. De Oliveira’s seeming immortality has been an ongoing wonder in the cinema world, but what’s most remarkable about it is that the director’s roughly movie-a-year output never abated over that period, nor did his yen for formal adventurousness or the critical acclaim that greeted much of his work. In fact, for as long as he’s been in the picture, it’s really the films from the later decades of his life that have earned him the most notoriety, perhaps because his age so strongly informed their ruminative, death-haunted qualities.

De Oliveira was born in the same city in which he died, Porto, so it’s appropriate that his very first film, the 1931 silent short “Douro, Faina Fluvial,” is a portrait of his native city. It wasn’t until over a decade later that de Oliveira made his first feature-length film, 1942’s Aniki-Bóbó, about the city’s children, but political circumstances and business obligations kept him from directing a feature again for another 20 years. He didn’t really find his groove until he was into his 60s and 70s, starting with a “Tetralogy of frustrated loves” that includes Past And Present, Benilde Or The Virgin Mother, Doomed Love, and Francisca, and revealed an interest in modernism and self-reflexivity that would run through his subsequent work. He also continued to make documentaries and avant-garde films, and attracted international stars like John Malkovich, Catherine Deneuve, Jeanne Moreau, Irene Papas, and Michel Piccoli.

My first encounter with de Oliveira’s films was 1997’s Voyage To The Beginning Of The World, which happened to be Marcello Mastroianni’s final role and very consciously deals with mortality. In fact, Mastroianni plays a director named “Manoel” who embarks on a road trip through northern Portugal with an actor and two other companions, and is in a mood to reflect on history and art. I remember finding the film difficult, most likely because its absence of a more pressing narrative wasn’t something I was accustomed to seeing or appreciating at the time. But I grew into loving some of his later efforts, especially 2001’s I’m Going Home,  which cast another aging icon, Piccoli, as a de Oliveira alter-ego—here an actor who grapples with the tragedy of his wife, daughter, and son-in-law dying in a car accident. Rather than marinate in that loss, de Oliveira cuts to Piccoli “Some Years Later,” as he raises his grandson and continues to perform on stage and screen. The  pall from the earlier deaths never entirely dissipate, and his career has its disappointments, too, as there’s a creeping sense that his vitality as an artist is on the wane. But I’m Going Home is also about taking pleasure from the day-to-day and the importance of exiting on your own terms.

De Oliveira exited on his own terms, too, and outlived celluloid in the process.