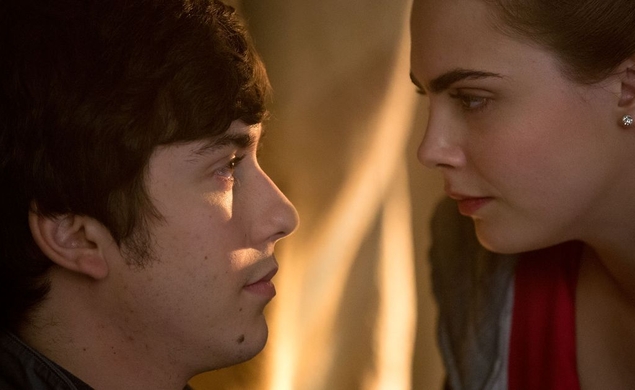 Author John Green, the writer behind the YA novels that spawned The Fault In Our Stars and the forthcoming Looking For Alaska, loves to write teen female characters who are super hot and mysterious and troubled and exist primarily to teach teen male characters something important about life, then blight them with an illness, disappear them, or kill them off. I can’t blame him—teens are annoying, for sure (all that texting and smooching!!), and it’s a pattern that seems to be working really well for him. I, too, would continue writing about manic-pixie-dream people not long for this world if I were making millions of dollars in book, movie, and candy-bar sales.

The latest big-screen Green (what they call him behind his back in literary circles, probably) adaptation, Paper Towns, dropped its first trailer today, and at first glance, it appears to adhere to Green’s unspoken rules: It introduces a free-spirited, beautiful, ostensibly unavailable young woman (Cara Delevingne, English-model-turned-Instagram-sensation-turned-actress). She shows a smitten dude (Nat Wolff, who played Isaac in Fault In Our Stars) how to live on the edge, via spray-painting on walls and Saran-wrapping cars. Then she peaces the fuck out.

Though it’s written by Fault In Our Stars screenwriters Michael H. Weber and Scott Neustadter, Green told the Today show Paper Towns would be “a lot funnier” than its predecessor. I suppose it is funny to buy catfish in the middle of the night in Orlando. Let’s all watch the trailer together and enjoy Delevingne’s pretty solid attempt at an American accent:

It’s like Gone Girl, but for kids who love Garden State! Full disclosure: I haven’t read this particular Green book, only summaries of it, but without spoiling too much, it looks like Paper Towns might redeem itself near the end, at least in terms of giving its female protagonist more motivation than “teach this insecure boy about life.” Full disclosure, part 2: I weirdly love Cara Delevingne, so I will probably see this movie. Full disclosure, part 3: If Margo Roth Spiegelman isn’t Jewish, I’mma be pissed.