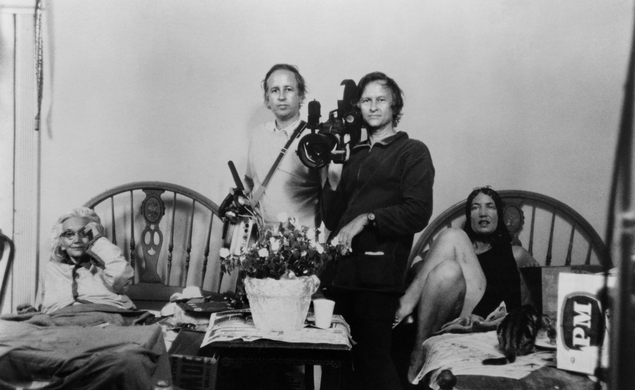 With his brother David, Albert Maysles, who died last night at the age of 88, captured some of the most famous moments of the 20th century and explored stories that would never have been known without them. It’s no exaggeration to say that, in the process, they changed the way we look at the world. With D.A. Pennebaker, who worked alongside Albert on the 1960 documentary Primary, the Maysles pioneered new approaches to documentary film, using advances in film technology to plant themselves in the middle of the action and keep the camera rolling as the action unfurled. Their cinéma verité approach broke with documentary convention, helped redefine film language, and changed the expectations for documentary films and the narrative films that drew on their you-are-there innovations.

Born in Boston, Albert Maysles began his career working in a mental hospital and teaching psychology at Boston University. In 1955, he seized an opportunity to merge his expertise with a lifelong interest in photography by talking his way into an assignment making the film “Psychiatry In Russia” for CBS. Asked by Interview magazine, years later, if he saw this as a natural progression, Maysles replied:

It seemed that way to me, yeah. The psychologist can’t counter things with a point of view, but always has to be open to whatever is really going on. I think I’ve developed a special talent for getting access to people. My wife is a family therapist, and she has said that when you first meet a subject, if your gaze is an empathetic one, you’re all set. And that process of empathy should continue all the way through the therapy. That’s precisely the basis for my own way of working with subjects.

A second film, “Youth In Poland,” followed, then Primary, a look at the 1960 Wisconsin presidential primary, which found him working alongside simpatico filmmakers Pennebaker and Richard Leacock under the direction of Robert Drew. From there, Albert began his collaboration with David, usually working the camera while David worked the recorder. Their early collaborations included What’s Happening! The Beatles In The U.S.A., a film about the band’s first visit to America, and short documentaries about Marlon Brando, Truman Capote, and others.

Capote’s non-fiction novel In Cold Blood provided the indirect inspiration for what would be the brothers’ breakthrough film, Salesman, an attempt to make an extended cinéma verité non-fiction film. First screened in 1969 and made, as were many of the brothers’ films, in collaboration with Charlotte Zwerin, Salesman follows door-to-door salesmen as they attempt to make a living peddling bibles. Moving from house to house, they push hard and often lapse into frustration and despair. Self-funded and self-released, it’s a bleakly funny, unsparing look at the bottom rung of the American dream—and those who barely hang onto it.

By the time Salesman first began wowing audiences, the Maysles were already on to their next project, which would go in directions they couldn’t have predicted when they began. Gimme Shelter originated as a film of the Rolling Stones’ 1969 tour of America and would have been a fascinating film even if the disaster at Altamont didn’t supply it with an unforgettable final act. The camera rolls as the band records in the South and colorful attorney Melvin Belli negotiates on their behalf. But it’s the Altamont footage that makes it so remarkable, from the doom-laden, drug-soaked atmosphere that seems like a set-up for trouble from the start, to the stabbing death that gave the show its terrible climax. It’s become a cliché to point to Altamont as the symbolic end of the 1960s, but the Maysles’ image of the Stones leaving the wreckage behind in a helicopter plays like an era coming to a perplexing close.

From there, the Maysles kept working, earning a Best Documentary Short nomination for 1974’s “Christo’s Valley Curtain” and in 1976 releasing Grey Gardens, which would become one of their most enduring films. A feature-length visit with two cousins of Jacqueline Kennedy Onassis, a mother-daughter pair who both bore the name Edith Beale, Grey Gardens finds them living in squalor. That sounds like a simple, possibly exploitative film, but Grey Gardens—which The Dissolve featured as a Movie Of The Week last year—resists easy categorization. Both mother and daughter take to the camera, creating a sense that they’d been waiting to tell their story to someone, and that the Maysles just happened to be in the right place at the right time.

The brothers’ collaboration ended with David’s death in 1987, but Albert continued working, making films about artists (particularly Christo), musicians, athletes, and other notable figures. His later filmography is a mix of passion projects and work-for-hire, a career path that allowed him to film everyone from Muhammed Ali to Britney Spears. His most recent film, Iris, a portrait of 93-year-old interior designer Iris Apfel, premiered at the 2014 New York Film Festival.

Some revolutions become invisible, and that’s somewhat the case with the Maysles’ contributions to film. We take handheld, fly-on-the-wall camerawork for granted whether it shows up in reality TV, found-footage horror films, or in the faux-documentary camerawork of Battlestar Galactica and Parks And Recreation. But the Maysles’ contributions went beyond technical innovation. Put simply, they made great films, as compelling in their own right as fictional narratives (which is another breakthrough that’s become more or less invisible). They knew where to point the camera and how to find a story in what they filmed. When I interviewed Albert Maysles in 2000, I asked him the influence of the approach he pioneered. He replied: “I think it’s been a trend over the years for Hollywood not to give up its aesthetic of grandeur and expense, but to make things look more realistic. … But still, you don’t get the realism on screen. It’s only when it’s really real that you get that.”