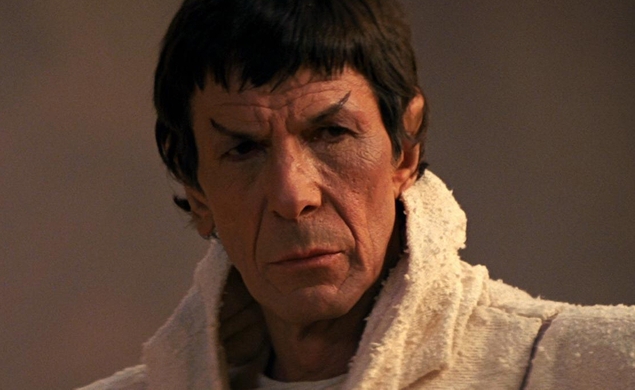 Leonard Nimoy, who died today at the age of 83, published two autobiographies. The first, from 1977, is titled I Am Not Spock, the name of the character he originated on the 1960s television series Star Trek and played in multiple films and a two-episode arc on Star Trek: The Next Generation in the years following its cancelation. The second, released 20 years later, is titled I Am Spock.

So which was it? For Nimoy, the answer was somewhere in between. Born in Boston to a pair of Orthodox Jewish immigrants from the Soviet Union, Nimoy’s acting career predated Star Trek. Nimoy scored a starring role in the 1952 B-movie Kid Monk Baroni and in subsequent years could be seen in movies both big (like Them!) and small, while also making frequent television appearances on Wagon Train, The Twilight Zone, Perry Mason, and now-obscure programs like Tales Of Wells Fargo.

It was Star Trek that made him famous, however. As the half-human/half-Vulcan Mr. Spock, Nimoy stood out even when acting opposite the show’s visiting cast of rubber-suited aliens. That had something to do with the pointy ears Nimoy wore as the character, but just as much with the unsmiling charisma he brought to the role. Paired against the hot-tempered man of action Captain Kirk (William Shatner, who became a lifelong friend) and the emotional Dr. McCoy  (DeForest Kelley, who died in 1999), Nimoy’s Spock served as the voice of reason. His Vulcan side, which dictated he follow the laws of logic at all times, gave him no choice. But it was the flashes of emotion—particularly those that confirmed his suppressed affection for his shipmates—that kept the character from becoming one-note, flashes Nimoy meted out carefully.

After Star Trek’s cancellation in 1969, Nimoy didn’t miss a step. He became a regular on Mission: Impossible and picked up steady film work. He revived Spock for an animated series that ran for one season in 1973 and 1974 and probably thought he’d seen the last of the character. But a funny thing happened on the way to TV obscurity: Star Trek became even more popular in reruns. In 1979, Nimoy revived his most famous character for Star Trek: The Motion Picture then returned in its five sequels. Along the way, he became increasingly involved with the franchise behind the camera, directing Star Trek III: The Search For Spock and Star Trek IV: The Voyage Home, and working on the story for the latter and Star Trek VI: The Undiscovered Country, for which he also served as an executive producer.

Star Trek VI was billed as the last adventure of the original Star Trek crew, which was technically true, but Nimoy took up the role again both on Star Trek: The Next Generation and in the pair of revived films directed by J.J. Abrams, in which he played the original Spock opposite Zachary Quinto’s alternate-universe Spock.

That’s a lot for the “I Am Spock” column, but Nimoy’s career easily filled up the “Not Spock” column as well. Nimoy directed several non-Trek movies, including the 1987 hit 3 Men And A Baby. He kept busy in theater and as a fine-arts photographer. He released volumes of poetry and several albums. He also acted frequently, narrating In Search Of…, making memorable appearances on Fringe, even showing up in music videos. Remove Spock from Nimoy’s career, and there’s still much to admire.

Yet removing Spock, as Nimoy knew, was impossible, as the title of his second autobiography as much as admits. A role that iconic colors every appearance, and Nimoy smartly learned to use this to his advantage. When he turns up as a self-help guru with a hidden agenda in Philip Kaufman’s 1978 remake of Invasion Of The Body Snatchers, his performance is only enhanced by the sense that there’s something a little off, a little alien about the character. Spock maintained a presence even when playing against type, as when Nimoy guest-starred on Shatner’s ’80s cop show T.J. Hooker as a man whose drive for revenge let his emotions cloud his reason.

Ultimately, Spock seems to have been a case of the right actor finding the right role, and then learning not to be overshadowed by it. It helps that, off-screen, Nimoy always seemed to remain good-natured and accommodating about his most famous role. And if he couldn’t help seem a little Spock-like in his public persona, maybe that was just evidence that he invested much of himself in the character. He signed his tweets LLAP, short for “Live long and prosper,” the Vulcan blessing Spock made famous. That included his final tweet, and since there’s no better way to end a tribute to Nimoy, let’s end with that:

A life is like a garden. Perfect moments can be had, but not preserved, except in memory. LLAP