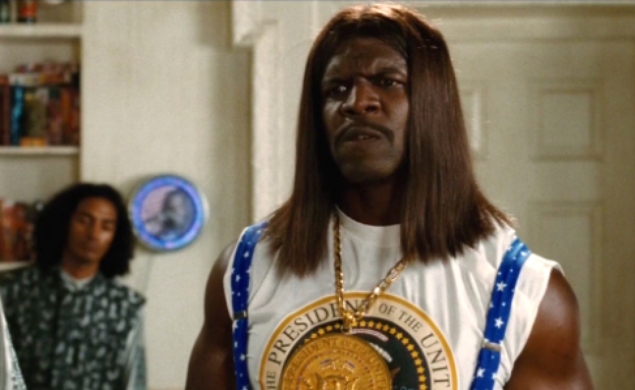 There are a lot of athletes who have made the transition from sports to show business. It’s a natural evolution to go from one form of performing for the general public to another. If athletes aren’t generally known for their masterful understanding of the acting craft or keen knowledge of the human psyche, they’re generally in excellent shape, often attractive, and usually in the market for a second career once their short lives as professional athletes end.

Terry Crews made a particularly smooth transition from NFL never-was to a somewhat different form of entertainment when he scored the role of T-Money on the American Gladiators knockoff Battle Dome. Battle Dome afforded Crews another opportunity to be an athlete, but also to be an entertainer, to stop being Terry Crews, humble NFL vet who painted portraits of his teammates to make money, and become T-Money, a larger-than-life character who rattled off long spiels about the damage he was about to inflict on whomever was unlucky enough to be pitted against him.

I did not watch Battle Dome, because I fancy myself a civilized human being. Yet I suspect that there’s more than a little T-Money in President Dwayne Elizondo Mountain Dew Herbert Camacho, the badass-in-Chief he played in his star-making turn in Mike Judge’s dyspeptic social satire Idiocracy. Judge’s 2006 cult satire is about a distant future that has devolved to the point where the most average man of today, a military nobody played by Luke Wilson, is the smartest man in the world once he’s released from cryogenic freezing.

Addressing a populace even tackier than he is, Camacho plays the president as a traveling preacher spreading the gospel that the man known as “Not Sure” (that would be Wilson) will singlehandedly do everything the Christian God is supposed to do—feed the starving, solve all the problems, eliminate acne and the common cold—and will do so with a week. Or else.

Crews makes Camacho part preacher, part professional wrestler who can’t stop vamping and flexing his muscles no matter how inappropriate such displays of strength might be, part porn star with his hand glued to his crotch, part military dictator with a machine gun always at the ready, and part future president gone wild. It’s a crazily kinetic performance—Crews never stops moving, never stops strutting, never stops performing for his public as much as the audience. Crews looks every bit the part: He doesn’t just look like an ex-athlete, he was an ex-athlete. But there is a lack of self-consciousness to his performance that borders on joy. Crews obviously loves what he’s doing, loves the comic contrast between looking like the toughest guy in the world and behaving like the universe’s silliest goof, in a way that’s utterly infectious.

Idiocracy is a caustic, scathing satire, bleak and misanthropic in its richly merited contempt for society, but Crews is having a blast. He’s free and uninhibited in a way other characters aren’t. It’s as if he finds being the world’s most flamboyant, powerful jackass liberating rather than oppressive, as if he’s unleashing some President-Camacho side to his personality he’s otherwise smart enough to keep hidden.

Idiocracy marked the beginning of Crews’ career as a sought-after comic actor. It turned out there was a lot of demand for a man who looked like Crews and was willing to act the fool brilliantly and consistently, no matter how dire the circumstances. I cannot say how many times I’ve sat through the credits of a terrible-looking movie and experienced that little burst of hope when Crews’ name shows up (I’m thinking specifically and most recently of Blended), and was relieved to know that for however long he was on screen, I would enjoy myself. He’s the best part of countless terrible movies, and it all began with his brilliant portrayal of the unlikeliest president imaginable.