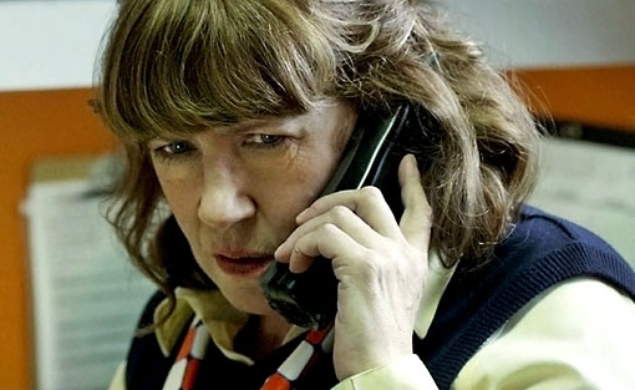 If the tone were to shift even so slightly, Craig Zobel’s mesmerizing, deeply disturbing 2012 drama Compliance could easily register as either a bad-taste black comedy about the gullibility and stupidity of the uneducated working class when confronted with even the flimsiest representation of authority, or a sleazy, exploitative sexual fantasy about a disturbed crank caller who manages to sexually humiliate a naive young woman by phone.

The film’s premise would certainly support both readings. Based on the proverbial true events, the film tells the story of an exceedingly busy, eventful day at a fast-food chicken restaurant already thrown into a tizzy over an expensive batch of spoiled food, a dearth of bacon, and the prospect of a secret shopper from corporate showing up to make sure the franchise is keeping up standards.

Then a man professing to be a police officer (Pat Healy) calls up the store and accuses Becky, one of the store’s employees, a lithe young blonde played by Dreama Walker, of having stolen money from a customer’s purse and other crimes he’s reluctant to get into initially. The caller insists that the police are so overworked they can’t send anyone over to investigate the situation firsthand (the first of an endless series of red flags that go ignored), so he deputizes the franchise’s stressed-out manager Sandra (Ann Dowd) to act on behalf of the police, isolating Becky in the back room and subjecting her to a strip search and a series of even more invasive demands that eventually climax in a sexual assault.

All the while, there is absolutely no evidence whatsoever that Becky has done anything wrong, beyond the caller’s insistence she’s guilty. But that doesn’t keep Sandra and, later, her schlubby boyfriend, from complying with the manipulative, bullying unseen officer whose demands grow progressively more sadistic, sexual, and perverse.

When I saw Compliance at Sundance, the response was heated and divisive—many felt that the film had crossed a line from exploring our knee-jerk deference to authority to exploiting the audience’s prurient interest in seeing a desirable young woman sexually debased. In the wrong hands, Compliance could feel closer to Letter To Penthouse than to a fast-food version of the real-life Stanford Prison Experiment, wherein volunteers famously began to act abusively after they were asked to pretend to be prison guards for an extended period of time. But I thought Zobel found the exact right tone for the material: cold, clinical realism with a bracing edge of social and sociological commentary.

That realism is attributable largely to a brilliant performance by Dowd, who plays the kind of character that is seldom seen, even in Sundance movies: an overweight, plain-looking middle-aged woman with an unglamorous job and an even less glamorous boyfriend. She’s hypnotic in her ordinariness, and the film wouldn’t work if Dowd’s face didn’t so subtly but convincingly convey the steps that would lead a fundamentally good person into doing something so transparently wrong and abusive.

Dowd plays Sandra as a woman who begins the film unsure of herself and her place in the world, bullied by upper management and alienated from employees a generation younger than herself, whose unabashed sexuality she clumsily tries to relate to when she tells them that she and her big galoot of a boyfriend regularly engage in “sexting.” She’s a woman who derives her sense of identity and importance from her sense of duty, and the caller brilliantly manipulates her by making her feel important and necessary. She might have begun the shift as a harried middle-manager, but once the caller, whom the brilliant Healy plays as the very representation of the banality of evil, begins alternately sweet-talking her and bullying her, she begins to feel as if she is playing an important role in a criminal investigation. This plays both to her need to feel special and important and her unwavering sense of duty, even when that duty is being twisted and contorted to sick ends.

If Dowd had played the character as gung-ho about her impromptu new position as a police liaison, the film would have veered into bad-taste comedy, but what makes the film so sickeningly compelling and disgustingly plausible is the deep ambivalence Dowd brings to the role. She’s caught between wanting to do right by her employees and wanting to be important and help bring down what the caller eventually describes as a major marijuana ring.

Dowd feels terrible about what she’s doing at every step, betraying a deep anguish even as she tries to do exactly what the caller asks of her—she feels compelled to continue following his orders, in part because her sad little life is fundamentally all about following orders. Dowd’s masterful performance reveals how good people can do bad things for the right reasons, how a blind deference to authority can lead good people to abandon their common sense and become complicit in a deep evil.

People who watched Compliance at Sundance, and were enraged at what they saw as its dim view on human nature and underlying exploitation, viewed it as too far-fetched and preposterous to be plausible (despite an opening credit saying it was based on a true story, and an end credit claiming that scenarios similar to the one dramatized in the film happened in over 70 restaurants). But Dowd’s performance and Zobel’s masterful direction make it far too easy to understand how something so horrifying and wrong could be perpetrated by fundamentally decent people, deluded into thinking they’re doing the right thing.