The Sound Of Music is celebrating its 50th anniversary 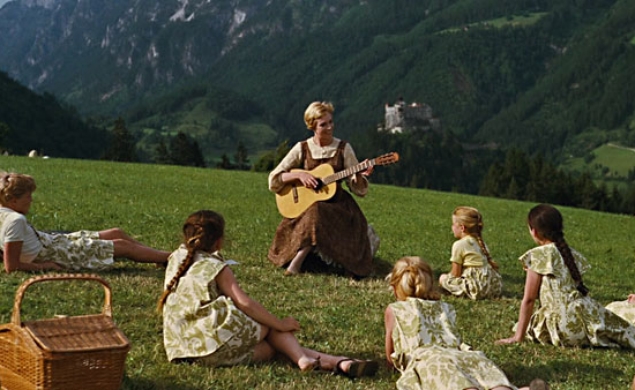 Remember when movies could stand alone, outside of a franchise, disconnected from retail tie-ins, void of all superheroes, and make people happy? Remember when Julie Andrews could casually and fabulously rock tea-length beige dresses? Remember when you were a kid, and you could patiently endure a 174-minute movie musical because you had no Instagram to refresh, no Facebook status to update, no parole officer calling you to tell you that you can’t leave the state anymore?

Well, none of that’s true anymore (Andrews, please confirm: tea-length not as “happening” these days), but the good news is that you can pretend it is for a brief moment (or 174). The Sound Of Music is celebrating its 50th birthday this year, and there is a very intense slate of stuff planned in its honor. Basically, to celebrate properly you’ll need to clear your schedule for the next six to eight months and not spend any money until March. Done? Okay, let’s get started.

First, the movie will screen at the Turner Classic Movies Classic Film Fest (we get it TCM, these movies are classic) March 26 in Hollywood, followed by a Q&A with Julie Andrews and Christopher Plummer. I’m already weeping; please bear with me. Then, on April 19 and 22, a restored version of The Sound of Music will screen in more than 500 theaters across the U.S. See everyone there? Both days? All day? Okay, great. (Tickets will be here soon.)

But wait—there’s more! Never one to miss an opportunity to pile up cash in the name of nostalgia, Twentieth Century Fox will also add 13 hours of additional content—including a doc called The Sound Of A City: Julie Andrews Returns To Salzburg—to the five-disc collector’s edition of the movie on DVD and Blu-ray, out March 10. Thirteen hours? That’s nothing! Bring it, Fox!

Here’s where things get kind of confusing. Variety reports that “four new books and a themed Princess Cruise will also help celebrate the classic’s anniversary.” According to a really long and press-release-y press release, the books have vague titles like The Sound Of Music Companion – 50th Anniversary Edition and The Sound Of Music Story. Are they about the making of the movie? About what happens to the von Trapp clan once they escape? Or are they four books full of fan fiction about Julie Andrews and Christopher Plummer’s Q&A at Turner Classic Movies Classic Film Fest? Please let it be that one. The themed cruise I can get on board with (pun intended, thank you for your compliments), but its press release description is incredibly vague. (“The acclaimed line will screen the movie on board multiple sailings throughout the year along with themed events, sing-a-long experiences and more.”) Where are these cruises going? Will they come back? Do we have to sing the whole time, or just while awake? I’m cool with either, for the record.

LASTLY (probably not lastly, though), there will be a Sound Of Music 50th Anniversary Fest in Salzburg, Austria, June 22-28, replete with sing-alongs and a tours of famous filming sites for the film. (This appears to be a totally separate thing, but Fox, you should probably get in on this cash cow while you still can.) See everyone there? All seven days? Okay, great.