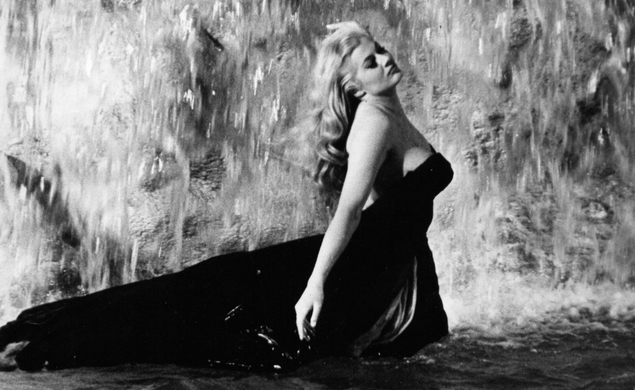 It’s said that when asked about her role in Federico Fellini’s masterpiece La Dolce Vita, va-va-voom starlet Anita Ekberg once claimed, “It was I who made Fellini famous, not the other way around.” That’s a larger-than-life sort of claim, patently false, but that’s the sort of vibe Ekberg gave off during the heyday of her incomparable beauty. That film provides the definitive moment in Ekberg’s career, when bombshell Sylvia frolics through the Trevi Fountain with Marcello Mastroianni’s weary gossip reporter. Her curves, the water, that dress—surely, actual women cannot assume a form that verges so brazenly close to divinity. She was a trick of the light, the sort of impossibly flawless woman that can only exist on-screen. Indeed, the sort of woman for whom the moving picture was invented in the first place.

But she was also a human being. Anita Ekberg died on Sunday morning at age 83. She had battled various illnesses for years prior to her admission to Rome’s San Raffaele di Rocca di Papa clinic in December. Her health had been in a serious decline ever since a broken hip put her in a wheelchair in 2011.

Ekberg was born on Sept. 29, 1931 in Sweden’s Skåne province as the sixth of what would ultimately be eight children. Her good looks were obvious from a young age, as she won the title of Miss Sweden at 20 and competed in the then-nascent Miss Universe competition in 1951. She  didn’t win, but her consolation prize wasn’t too shabby: A full contract with Universal Studios. She debuted in Abbott and Costello Go to Mars in 1953, but soon grew out of studio cast-offs and assumed her place as Public Fantasy No. 1 shortly thereafter. As she took increasingly more visible roles in such films as King Vidor’s War And Peace adaptation and Martin and Lewis’ Artists And Models, Ekberg carefully cultivated her own mythos. She frequently used interviews to diss industry folks she didn’t care for, in full knowledge of the papers such comments would move. She engineered the occasional publicity stunt, most memorably inducing her dress to pop open during a photo-op at London’s Berkeley Hotel. As the final jewel in her tiara, she married (and promptly divorced) the appropriately attractive Brit actor Anthony Steel.

But as her dizzying beauty began to fade, so too did Ekberg’s life gradually fall to shambles. She virtually disappeared from the film world over the course of the ’70s, but took a much harder hit in 2011. While she convalesced from the broken hip mentioned above, robbers ransacked the actress’ home and set her villa aflame, leaving her nearly penniless. She was forced to turn to the Fellini Foundation of Rimini for financial assistance, but remained destitute until her death.

It was an unceremonious end for an inimitable star. Whether she was kneeing nosy photographers in the groin or ditching acting lessons to ride horses in the Hollywood Hills, Ekberg shone with a lust for life that audiences can treasure for eternity. So, yes, let’s: